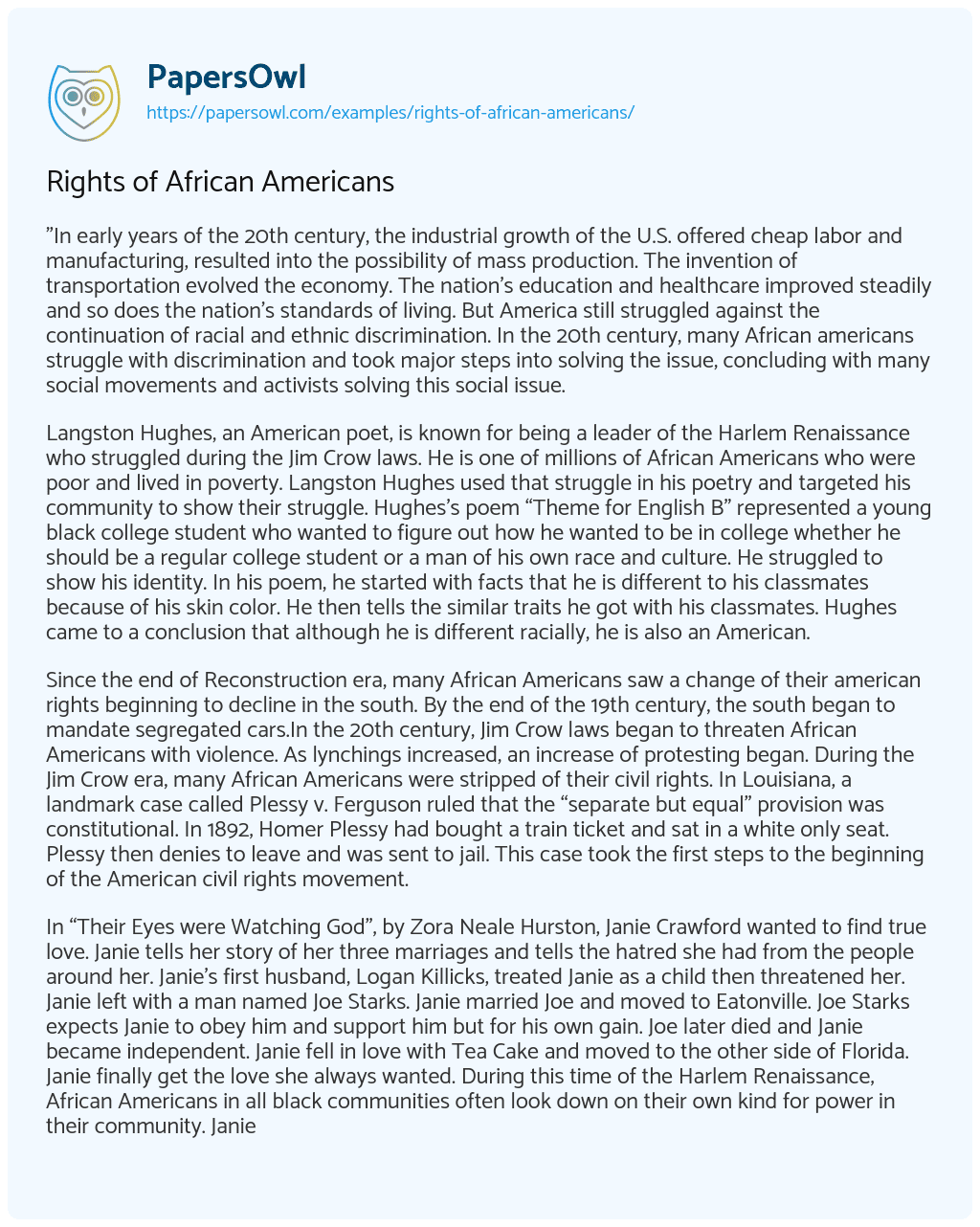 “In early years of the 20th century, the industrial growth of the U.S. offered cheap labor and manufacturing, resulted into the possibility of mass production. The invention of transportation evolved the economy. The nation’s education and healthcare improved steadily and so does the nation’s standards of living. But America still struggled against the continuation of racial and ethnic discrimination. In the 20th century, many African americans struggle with discrimination and took major steps into solving the issue, concluding with many social movements and activists solving this social issue.

Langston Hughes, an American poet, is known for being a leader of the Harlem Renaissance who struggled during the Jim Crow laws. He is one of millions of African Americans who were poor and lived in poverty. Langston Hughes used that struggle in his poetry and targeted his community to show their struggle. Hughes’s poem “Theme for English B” represented a young black college student who wanted to figure out how he wanted to be in college whether he should be a regular college student or a man of his own race and culture. He struggled to show his identity. In his poem, he started with facts that he is different to his classmates because of his skin color. He then tells the similar traits he got with his classmates. Hughes came to a conclusion that although he is different racially, he is also an American.

Since the end of Reconstruction era, many African Americans saw a change of their american rights beginning to decline in the south. By the end of the 19th century, the south began to mandate segregated cars.In the 20th century, Jim Crow laws began to threaten African Americans with violence. As lynchings increased, an increase of protesting began. During the Jim Crow era, many African Americans were stripped of their civil rights. In Louisiana, a landmark case called Plessy v. Ferguson ruled that the “separate but equal” provision was constitutional. In 1892, Homer Plessy had bought a train ticket and sat in a white only seat. Plessy then denies to leave and was sent to jail. This case took the first steps to the beginning of the American civil rights movement.

In “Their Eyes were Watching God”, by Zora Neale Hurston, Janie Crawford wanted to find true love. Janie tells her story of her three marriages and tells the hatred she had from the people around her. Janie’s first husband, Logan Killicks, treated Janie as a child then threatened her. Janie left with a man named Joe Starks. Janie married Joe and moved to Eatonville. Joe Starks expects Janie to obey him and support him but for his own gain. Joe later died and Janie became independent. Janie fell in love with Tea Cake and moved to the other side of Florida. Janie finally get the love she always wanted. During this time of the Harlem Renaissance, African Americans in all black communities often look down on their own kind for power in their community. Janie was one of many women were expected to be housewives and being discriminated in their own community.

Many African Americans were stripped of their identity and pride. The struggles of African Americans since the removal of federal enforcement in the south resulted in the input of Jim Crow laws. This soon resulted in violence, as many poets and writers of the African american race bloomed in the Harlem Renaissance era. They share the daily violence they had endured and what stripped their identity as Americans. The Supreme case of Plessy v. Ferguson began the first known American civil rights movement. Social movements led by activists, poets and writers share the struggle of the African American community in the 20th century.”