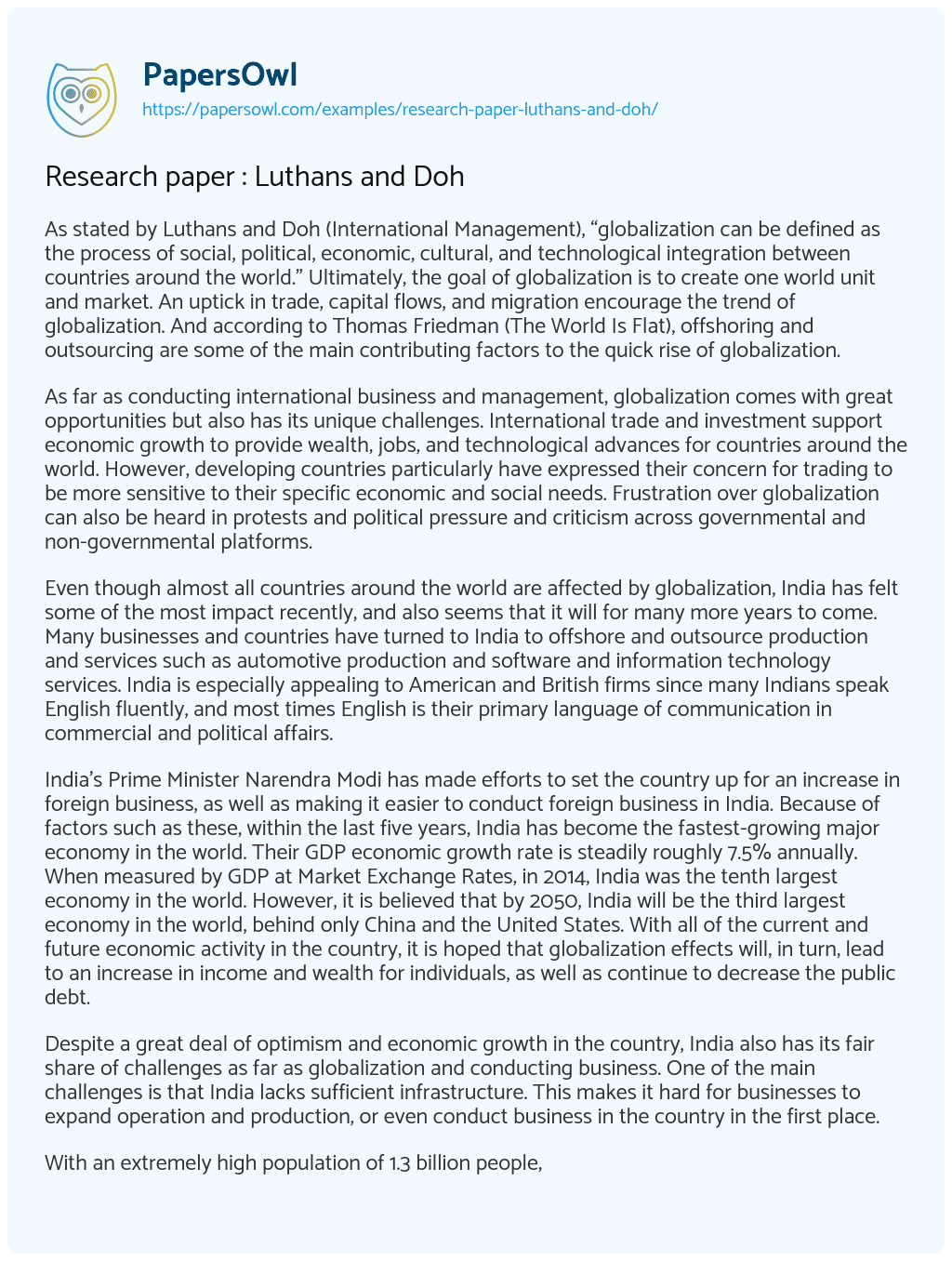 As stated by Luthans and Doh (International Management), “globalization can be defined as the process of social, political, economic, cultural, and technological integration between countries around the world.” Ultimately, the goal of globalization is to create one world unit and market. An uptick in trade, capital flows, and migration encourage the trend of globalization. And according to Thomas Friedman (The World Is Flat), offshoring and outsourcing are some of the main contributing factors to the quick rise of globalization.

As far as conducting international business and management, globalization comes with great opportunities but also has its unique challenges. International trade and investment support economic growth to provide wealth, jobs, and technological advances for countries around the world. However, developing countries particularly have expressed their concern for trading to be more sensitive to their specific economic and social needs. Frustration over globalization can also be heard in protests and political pressure and criticism across governmental and non-governmental platforms.

Even though almost all countries around the world are affected by globalization, India has felt some of the most impact recently, and also seems that it will for many more years to come. Many businesses and countries have turned to India to offshore and outsource production and services such as automotive production and software and information technology services. India is especially appealing to American and British firms since many Indians speak English fluently, and most times English is their primary language of communication in commercial and political affairs.

India’s Prime Minister Narendra Modi has made efforts to set the country up for an increase in foreign business, as well as making it easier to conduct foreign business in India. Because of factors such as these, within the last five years, India has become the fastest-growing major economy in the world. Their GDP economic growth rate is steadily roughly 7.5% annually. When measured by GDP at Market Exchange Rates, in 2014, India was the tenth largest economy in the world. However, it is believed that by 2050, India will be the third largest economy in the world, behind only China and the United States. With all of the current and future economic activity in the country, it is hoped that globalization effects will, in turn, lead to an increase in income and wealth for individuals, as well as continue to decrease the public debt.

Despite a great deal of optimism and economic growth in the country, India also has its fair share of challenges as far as globalization and conducting business. One of the main challenges is that India lacks sufficient infrastructure. This makes it hard for businesses to expand operation and production, or even conduct business in the country in the first place.

With an extremely high population of 1.3 billion people, the country’s once dominating industry of agriculture now only contributes to around 15% of India’s GDP. International influence has reduced government support of agriculture within the country, a decrease in agricultural subsidies, and an unwillingness to pay farmers. This leads to a constant price fluctuation for crops and as a result, reliance on imports.

The increasing difficulties of farming and domestic agriculture in India, as well as the increase in job opportunities in the services sector and foreign industry in cities, is causing a large migration of people from rural areas to urban areas. This migration and a new way of living are causing the younger generations of Indians to embrace the “western way of living” of individualism and independence. However, this is causing the older generations to become more vulnerable economically, emotionally, and in health in a concept of living that is completely new to them.

While younger generations are taking up new opportunities in the cities, there is also the problem of child labor due to globalization. Although child labor is deemed illegal by law, it is estimated that 300,000 children work in the hand-knotted carpet industry alone, an industry that exports $300 million worth of goods annually. Many other children who work in urban areas work in the manufacturing, processing, and servicing sectors.

Globalization is something that can and does have an impact on the social, political, economic, cultural, and technological scenery in developed countries and developing countries alike, such as India. Ultimately, the goal of globalization is to create one world unit and market. While there are unique challenges, globalization also comes with great opportunities. India contributes to this trend of globalization greatly with migration to urban cities and the large number of offshored and outsourced jobs within the country. Thanks in part to globalization, India’s economy is growing faster than any other major economy in the world and will hopefully lead to an increase in income and wealth for individuals, as well as continue to decrease the public debt of the country.

Research Paper on Gender Inequality in the Workforce in India