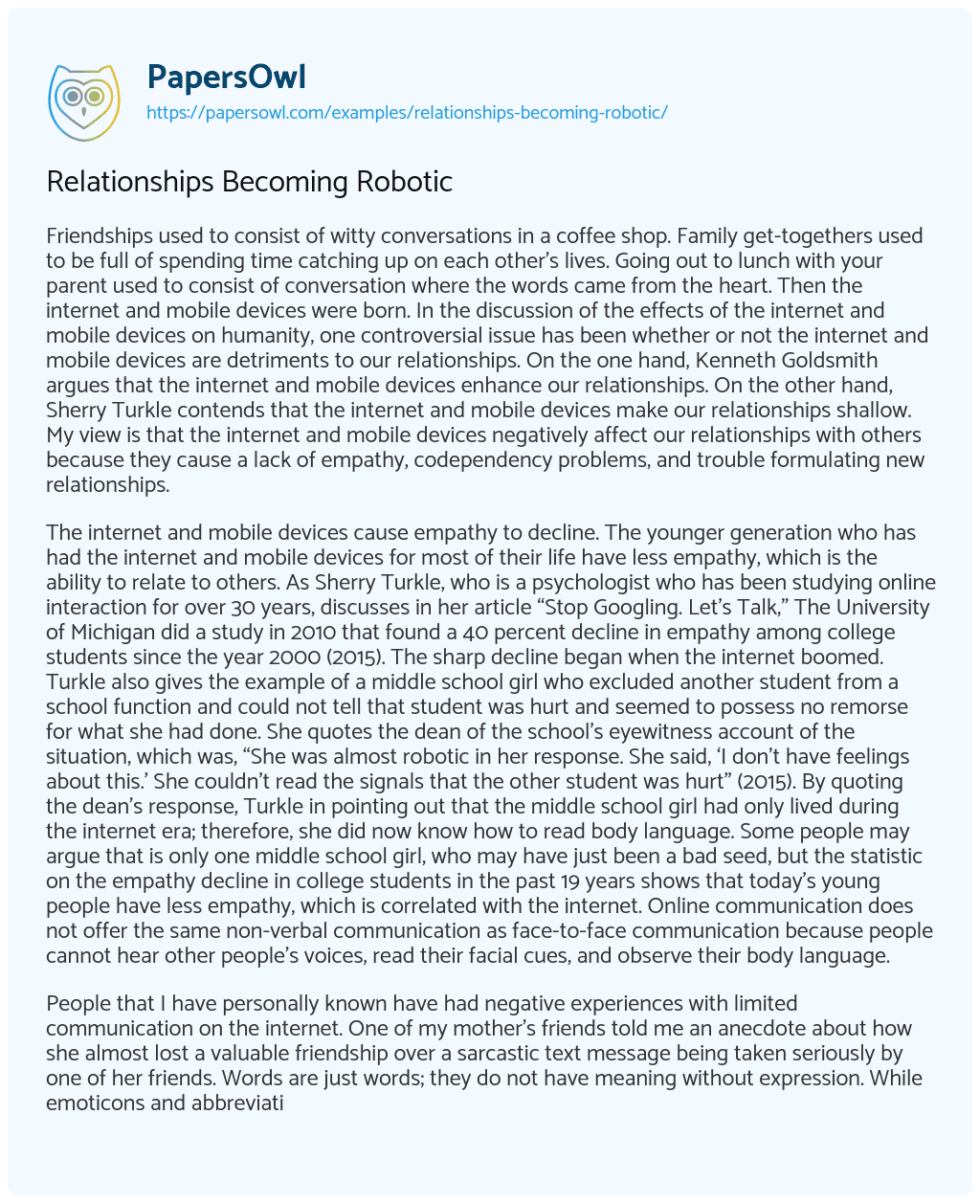 The internet and mobile devices cause empathy to decline. The younger generation who has had the internet and mobile devices for most of their life have less empathy, which is the ability to relate to others. As Sherry Turkle, who is a psychologist who has been studying online interaction for over 30 years, discusses in her article “Stop Googling. Let’s Talk,” The University of Michigan did a study in 2010 that found a 40 percent decline in empathy among college students since the year 2000 (2015). The sharp decline began when the internet boomed. Turkle also gives the example of a middle school girl who excluded another student from a school function and could not tell that student was hurt and seemed to possess no remorse for what she had done. She quotes the dean of the school’s eyewitness account of the situation, which was, “She was almost robotic in her response. She said, ‘I don’t have feelings about this.’ She couldn’t read the signals that the other student was hurt” (2015). By quoting the dean’s response, Turkle in pointing out that the middle school girl had only lived during the internet era; therefore, she did now know how to read body language. Some people may argue that is only one middle school girl, who may have just been a bad seed, but the statistic on the empathy decline in college students in the past 19 years shows that today’s young people have less empathy, which is correlated with the internet. Online communication does not offer the same non-verbal communication as face-to-face communication because people cannot hear other people’s voices, read their facial cues, and observe their body language.

People that I have personally known have had negative experiences with limited communication on the internet. One of my mother’s friends told me an anecdote about how she almost lost a valuable friendship over a sarcastic text message being taken seriously by one of her friends. Words are just words; they do not have meaning without expression. While emoticons and abbreviations such as “lol” assist in adding expression to a sentence, they are not unique to the individual, do not show the whole reaction of the individual, and can easily be manipulated. For example, a person can text a mean-spirited message and cover themselves by putting a smiley face on the end. Communicating via the internet and mobile devices hinders people from being able to recognize emotion in others and be mindful of it because it does not offer the same holistic communication like face-to-face communication. Just as my 7th-grade classmate’s mother said, “It is not what you say; it is how you say it.”

The internet and mobile devices fuel codependency, which is also known as an addictive relationship. Vince DiPasquale, the founder of the Starting Point Educational and Referral Center in Southern New Jersey and who has been working in the field of codependency and substance and behavioral addictions for over 40 years as a counselor and lecturer, discusses in his book Learn to Value Your Childhood: Your History is Your Teacher that one of the main roots of codependency is lacking a sense of self, which causes people to search for their identity in other people. “Identity is critical. If you do not have a clear sense of who you are, you lack serenity. Without serenity, you have sadness. When that persists, you develop depression, anxiety, addictions, and the other aspects of codependency” (2000, p.18). In this quote, he is stating that people must have healthy relationships with themselves to have healthy relationships with others. Turkle also emphasizes that solitude is important to building a healthy sense of self, which is the foundation for healthy relationships with others. She explains, “In solitude we find ourselves; we prepare ourselves to come to the conversation with something to say that is authentic, ours. If we can’t gather ourselves, we can’t recognize other people for who they are” (2015). Turkle’s profound explanation means people cannot know others if they do not know themselves. In the social media marketing course that I took my senior year of high school, my teacher showed a video titled “Being Thirteen: Inside the Secret World of Teens” about the effects of social media on middle schoolers. In the video, the parents took away their child’s phones to test their children’s reactions. Thirteen-year-olds regressed into the behavior of five-year-olds by throwing temper tantrums, which the experts said met the diagnostic criteria for “clinical addiction.” However, the experts said that the middle schoolers were “addicted to each other,” not their smartphones or social media (ConstantlySporadic, 2015). Having a society that is full of members who lack a sense of self and are therefore depending on others for their sense of identity will lead to a major mental health crisis.

I have personally struggled with codependency with my cousin who suffered from a substance use disorder. Social media, particularly Facebook, was my primary enabler. Much of my free time in middle school and high school was consumed by checking Facebook to find out the details of his active addiction. After he was released from prison, I discovered that he was immediately relapsing into his former addiction through his Facebook posts and who he was recently hanging out with, which made me crestfallen to the point that I spent much of my time sleeping that week and lost 10 pounds in one week. When I got into codependency recovery, I realized that I did not know a lot about myself and how to spend my free time. Social media is not merely a website; it is a place where people can go running from themselves and their issues by focusing on other people. Since people can use it to evade seemingly difficult, painful solitude, they do not have a solid foundation for healthy, fulfilling interpersonal relationships.

The internet and mobile devices are barriers to formulating new interpersonal relationships. Kenneth Goldsmith, a founding editor of the online archive UbuWeb, views the internet as a progressive communication tool. He expresses his belief in the article “Go Ahead: Waste Time on the Internet” by talking about his friend’s preteen gothic-style daughter who “was connecting with a community of girls her age who had similar interests” from a hotel room near the Grand Canyon (2016). Goldsmith was saying that the internet allows his friend’s daughter to meet people her age who also have the same rare interest without having to go searching every dimension of the earth, which would be impossible. While I agree that the internet can be used as a way to connect with people we may never see in person anymore or be able to meet in real life, I do not believe that it helps cultivate new face-to-face relationships. The virtual world and the real world are two separate entities. While I consider myself a progressive person, face-to-face conversation is essential to human relationships that cannot be replaced. People spend time in the virtual world instead of making the effort to meet new people in the real world. At my university, my classmates’ eyes are glued to their phones before class starts, and they pull their phones out the second that the professor concludes class. Their nose remains buried in the smartphone screen the entire time they walk to their next destination. They do not take the time to talk to their classmates to make a new acquaintance. The social norm at my university is for people to ask for each other’s Instagram usernames before their phone numbers. The internet and mobile devices are not just used as one form of communication; they are used as the only form of communication. Having communication in the palm of people’s hands distracts them from making an effort to communicate with their eyes, ears, and voices.

The internet and mobile devices that access it are a detriment to interpersonal relationships because how it changes how people relate to one another. While the internet and mobile devices can be useful as supplemental communication methods, they are becoming a monopoly of society’s communication methods. Face-to-face talk is dramatically decreasing and being replaced by typed messages that are full of misleading emoticons and expressive abbreviations. The pre-internet generation will most likely retain their social skills, but the younger generation will greatly suffer does not know anything different. Life can be painstakingly boring and desolate without human interaction. Mental health plays a crucial role in overall health as its independent form of health and influences physical health. The current abuse and misuse of the internet and mobile devices speaks dire consequences for the future. Scientist Albert Einstein said, ‘I fear the day that technology will surpass our human interaction. The world will have a generation of idiots.’ That day already is here. Unfortunately, the future of human civilization lies in tomorrow’s humans’ fingertips.

Does Technology Connect Us or Make more Alone?