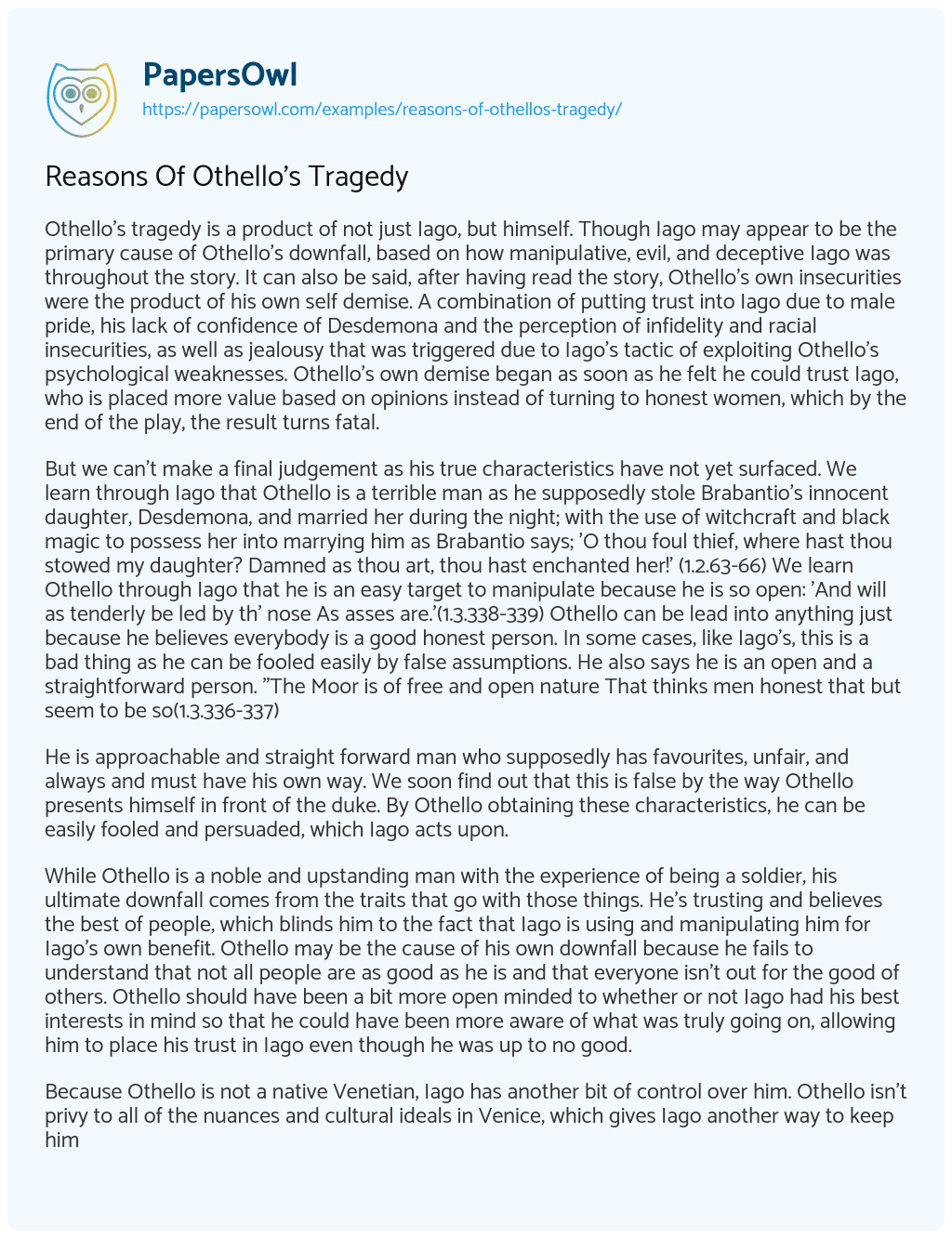 Othello’s tragedy is a product of not just Iago, but himself. Though Iago may appear to be the primary cause of Othello’s downfall, based on how manipulative, evil, and deceptive Iago was throughout the story. It can also be said, after having read the story, Othello’s own insecurities were the product of his own self demise. A combination of putting trust into Iago due to male pride, his lack of confidence of Desdemona and the perception of infidelity and racial insecurities, as well as jealousy that was triggered due to Iago’s tactic of exploiting Othello’s psychological weaknesses. Othello’s own demise began as soon as he felt he could trust Iago, who is placed more value based on opinions instead of turning to honest women, which by the end of the play, the result turns fatal.

But we can’t make a final judgement as his true characteristics have not yet surfaced. We learn through Iago that Othello is a terrible man as he supposedly stole Brabantio’s innocent daughter, Desdemona, and married her during the night; with the use of witchcraft and black magic to possess her into marrying him as Brabantio says; ‘O thou foul thief, where hast thou stowed my daughter? Damned as thou art, thou hast enchanted her!’ (1.2.63-66) We learn Othello through Iago that he is an easy target to manipulate because he is so open: ‘And will as tenderly be led by th’ nose As asses are.'(1.3.338-339) Othello can be lead into anything just because he believes everybody is a good honest person. In some cases, like Iago’s, this is a bad thing as he can be fooled easily by false assumptions. He also says he is an open and a straightforward person. “The Moor is of free and open nature That thinks men honest that but seem to be so(1.3.336-337)

He is approachable and straight forward man who supposedly has favourites, unfair, and always and must have his own way. We soon find out that this is false by the way Othello presents himself in front of the duke. By Othello obtaining these characteristics, he can be easily fooled and persuaded, which Iago acts upon.

While Othello is a noble and upstanding man with the experience of being a soldier, his ultimate downfall comes from the traits that go with those things. He’s trusting and believes the best of people, which blinds him to the fact that Iago is using and manipulating him for Iago’s own benefit. Othello may be the cause of his own downfall because he fails to understand that not all people are as good as he is and that everyone isn’t out for the good of others. Othello should have been a bit more open minded to whether or not Iago had his best interests in mind so that he could have been more aware of what was truly going on, allowing him to place his trust in Iago even though he was up to no good.

Because Othello is not a native Venetian, Iago has another bit of control over him. Othello isn’t privy to all of the nuances and cultural ideals in Venice, which gives Iago another way to keep him in the dark and control his actions to some degree. Rather than giving Othello the truth, Iago misleads him about Venetian culture and Venetian women, making Othello look silly and na??ve. This eventually leads to jealousy and a questioning of his wife, Desdemona. This jealousy takes over Othello’s existence and Iago exploits these feelings by keeping Othello in the dark about the culture in Venice so that he never really knows what is going on. Over time, Iago’s manipulation and lies cause Othello to kill Desdemona in an effort to keep her from doing the things that Iago has been telling him she has been doing. That includes having an affair, which Iago makes Othello believe is a normal part of the culture in Venice. However, he loves Desdemona and doesn’t want to think about her in the arms of another man. Killing her seems to be the answer to keeping her from doing the same to him again.

Although Othello seems to recognize his mistake in killing Desdemona and the fact that he had been pushed to this point by Iago’s manipulations, one of the most tragic elements of the play is that he never learns Iago’s motives. In fact, no character in the play is given the access to Iago’s reasoning that the audience gets, which means that when Iago refuses to explain “Why he hath thus ensnared Othello’s soul and body(5.2.315) Othello is left only knowing the things that Iago has arranged, but never why. Iago’s final words are cold, cruel, and surprisingly restrained, given his propensity for confessing his plans to the audience. He only says to Othello: “Demand of me nothing: what you know, you know: From this time forth I never will speak word. (5.2.316-317) Iago has lied to the characters, and only confided in us; although Iago may have not been completely honest, we are the only ones at the end to truly know how and why the play has come to this particular tragic end. So, the question really is, what does Othello know about what has happened and is it enough to truly understand his situation? His final confession suggests that he knows he has not loved wisely and has loved too well.

He also knows that he has been made jealous by Iago. He also seems to recognize another key element that has caused strain throughout the play: the power of one’s reputation. His final request to those who will tell his story that they “Speak of me as I am; nothing extenuate, Nor set down aught in malice (5.2.358-359) suggests that Othello wants to be remembered for who he truly was, yet the story he offers to them seems an insufficient representation of his character and the events. His identification of himself as “a malignant and a turban’d Turk also seems to replicate or internalize the characterization of Othello as a racial outsider, a characterization that Iago exploits in his disparagement of Othello’s character from the start. Given what Othello says at the end of the play, and Iago’s refusal to explain his motives, it seems that Othello has learned of and understood a large part of his situation. However, since he has come to identify with the dark, evil, racialized villain that Iago has moulded him into, he can only take responsibility for his actions without understanding the true motives that caused them to come about.

As evidenced by the actions of not just Iago, but by Othello, it is clear that despite being constantly in Othello’s head like a bad tumor, Iago isn’t the only reason for the bad things that happen to Othello, the lack of social knowledge Othello possessed while always being in battles, and having never known how to truly love are some of the results of his insecurities that caused Othello to let jealousy over power him leading to the death of Desdemona and himself by what he perceived to be the truth by listening to someone else, instead of thinking for himself and actually knowing the real truth.