Racism in Brent Staples’ Just Walk on by 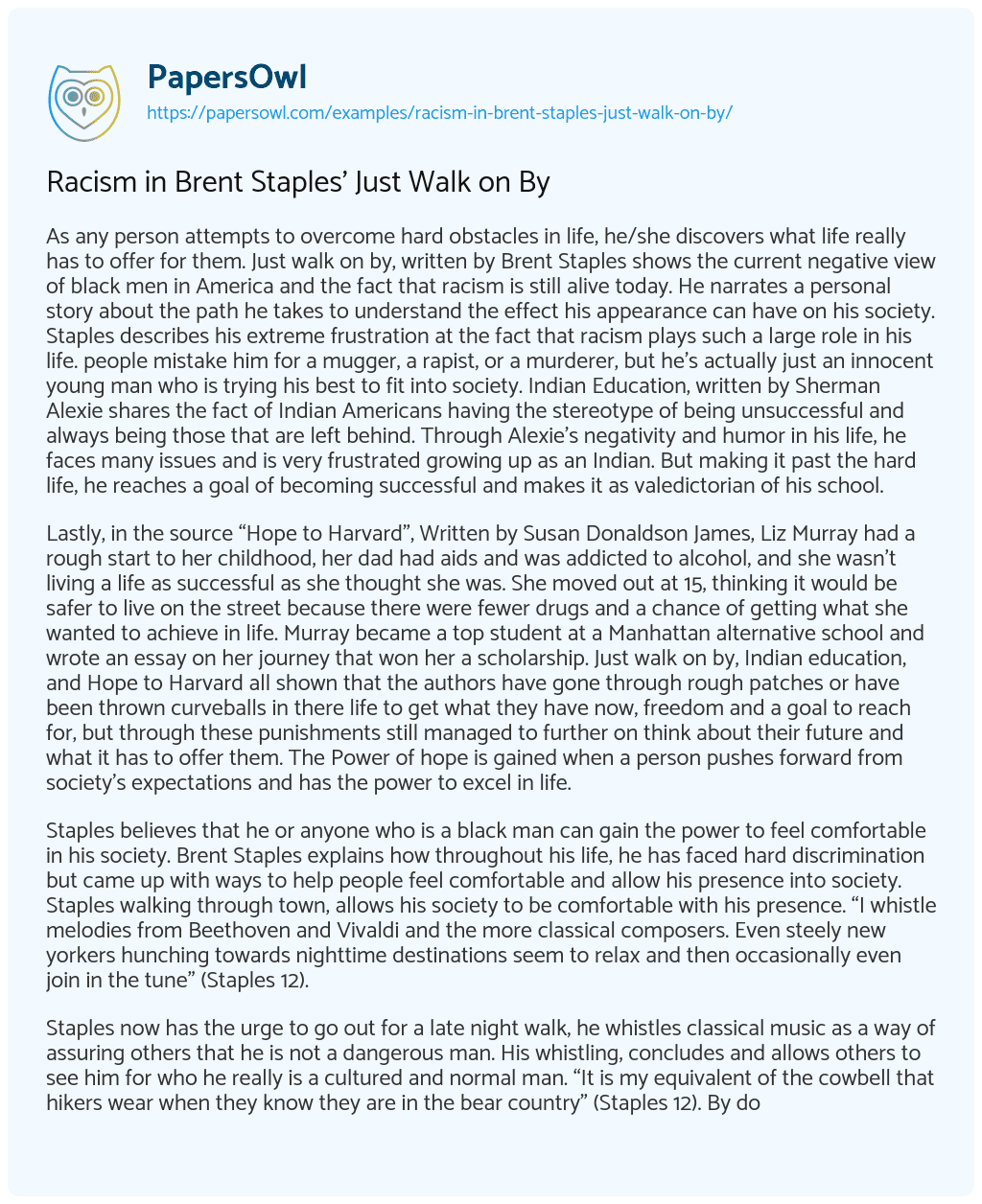 As any person attempts to overcome hard obstacles in life, he/she discovers what life really has to offer for them. Just walk on by, written by Brent Staples shows the current negative view of black men in America and the fact that racism is still alive today. He narrates a personal story about the path he takes to understand the effect his appearance can have on his society. Staples describes his extreme frustration at the fact that racism plays such a large role in his life. people mistake him for a mugger, a rapist, or a murderer, but he’s actually just an innocent young man who is trying his best to fit into society. Indian Education, written by Sherman Alexie shares the fact of Indian Americans having the stereotype of being unsuccessful and always being those that are left behind. Through Alexie’s negativity and humor in his life, he faces many issues and is very frustrated growing up as an Indian. But making it past the hard life, he reaches a goal of becoming successful and makes it as valedictorian of his school.

Lastly, in the source “Hope to Harvard”, Written by Susan Donaldson James, Liz Murray had a rough start to her childhood, her dad had aids and was addicted to alcohol, and she wasn’t living a life as successful as she thought she was. She moved out at 15, thinking it would be safer to live on the street because there were fewer drugs and a chance of getting what she wanted to achieve in life. Murray became a top student at a Manhattan alternative school and wrote an essay on her journey that won her a scholarship. Just walk on by, Indian education, and Hope to Harvard all shown that the authors have gone through rough patches or have been thrown curveballs in there life to get what they have now, freedom and a goal to reach for, but through these punishments still managed to further on think about their future and what it has to offer them. The Power of hope is gained when a person pushes forward from society’s expectations and has the power to excel in life.

Staples believes that he or anyone who is a black man can gain the power to feel comfortable in his society. Brent Staples explains how throughout his life, he has faced hard discrimination but came up with ways to help people feel comfortable and allow his presence into society. Staples walking through town, allows his society to be comfortable with his presence. “I whistle melodies from Beethoven and Vivaldi and the more classical composers. Even steely new yorkers hunching towards nighttime destinations seem to relax and then occasionally even join in the tune” (Staples 12).

Staples now has the urge to go out for a late night walk, he whistles classical music as a way of assuring others that he is not a dangerous man. His whistling, concludes and allows others to see him for who he really is a cultured and normal man. “It is my equivalent of the cowbell that hikers wear when they know they are in the bear country” (Staples 12). By doing this the hiker makes the bear feel at ease. Staples whistles classical music to show that he is an intelligent human being. The people near him can feel at ease and understand that Staples is not a rapist, murderers or mugger. Staples shows his personal experiences with racial stereotyping. He then calls for sympathy when he discusses his own family members, friends and colleagues that are also affected by this issue. “In that first year, my first away from my hometown, I was to become thoroughly familiar with the language of fear” (Staples 3). In the world, he was safe because people knew who he was. But, leaving his home, he had to learn the ways of the world. He had to prove himself to others which is impossible if his skin color prohibits him before he even gets a chance.

Sherman discusses the different stages of a Native Americans childhood compared to his white peers. He describes the discrimination he was faced from an Indian reservation, grade by grade. But despite the discrimination, he always uses his imagination to show what the future has to offer for him. Sherman realized basketball might be something he wanted to pursue. “I picked up a basketball for the first time and made my first shot. But it felt good, that ball in my hands, all those possibilities, and angles. It was mathematics, geometry. It was beautiful”(Alexie Fifth grade). Alexie seems to find an outlet through basketball that he can enjoy an escape from his mind and his abusive society. Basketball allows him to be social and not be pressured into abusing substances like his peers where. Coming from a rough start, Sherman still managed to take his education to the next level, graduating as valedictorian of his class.“I walk down the aisle, valedictorian of this farm town high school. Later, I stand as the school-board chairman recites my awards, accomplishments, and scholarships” (Alexie 12th grade).

Sherman is able to look toward the future because of his decision to remove himself from his society. It Put him on a path to be successful and desist from his bad decisions in life and to always being hopeful no matter your circumstances. Giving the opportunities his peers recite to him, he can help heal the people that were in rough stages like him. ‘You should be a doctor when you grow up,’ Mr. Schluter said. ‘Why should I be a doctor?’ I asked Mr. Schluter.’So you can come back and help the tribe. So you can heal people’ (Alexie 4th grade). The opportunities that Sherman’s teachers encourage him to pursue, make him feel like his future has something to offer him, He engages with his imagination to see what life would really be like living off the reservation. This makes Sherman feel hopeful.

Coming from a place where you can’t learn to be socially accepted, makes it hard to fulfill your later dreams, but Murray listened to the one wise person in her life, her mother, and with that confidence boost, was able to follow her dreams. Her mom taught her that confidence was the next big step in fulfilling her dreams. Murray had a spiritual epiphany and while crouching outside other families’ apartments, felt ‘[her] mother’s presence.’ “Her mother asked her to promise to excel in school and her daughter decided to fulfill that pledge” (James 5-6). With the confidence boost from her mother, she felt like her future wasn’t just a bust, after all, she felt hope to continue her dreams even if her mother wasn’t entirely there to support her. Murray’s dream was to get a good education but after having to take care of her dad and dealing with the pain of losing her mom she thought that was the end of her future but after telling her story she made her dream of getting into Harvard a reality.

“Murray became a top student at a Manhattan alternative school and wrote an essay on her personal journey that won her an Ivy League scholarship” (James 7). Murray didn’t give up on her dream, she kept on pushing and held onto the idea of hope to make her dream a reality. Her goal kept on going from getting into Harvard to writing her own story, and telling all about her journey and being able to connect with others that where faced with the same story as her. “Murray’s story of resiliency was fodder for her 2010 memoir, ‘Breaking Night.’ By the time she was 19, she was motivating others on speaking tours and by 22, she was conducting workshops to guide others struggling with life’s curveballs” (James 10). Through life’s rough patches, Murray made it possible to live out her dream, all because of her mother’s confidence boost and being able to agree with the world.

The power of hope is gained in these articles when each person realizes society’s expectations and learns how they can excel from society. Our nature is biologically and inherently spiritual. It may take its expression through religious tradition, but every single one of us is innately born with a spiritual capacity in our genes. — Lisa Miller, director, Spirituality & Mind/Body Institute

Racism in Brent Staples' Just Walk on By. (2021, Mar 27). Retrieved from https://papersowl.com/examples/racism-in-brent-staples-just-walk-on-by/

Superman and me Theme

The Walk of Life

Walk by Faith in myself

What you Redeem, i Will Write (About)

Injustice of Racism in i Know why the Caged Bird Sings