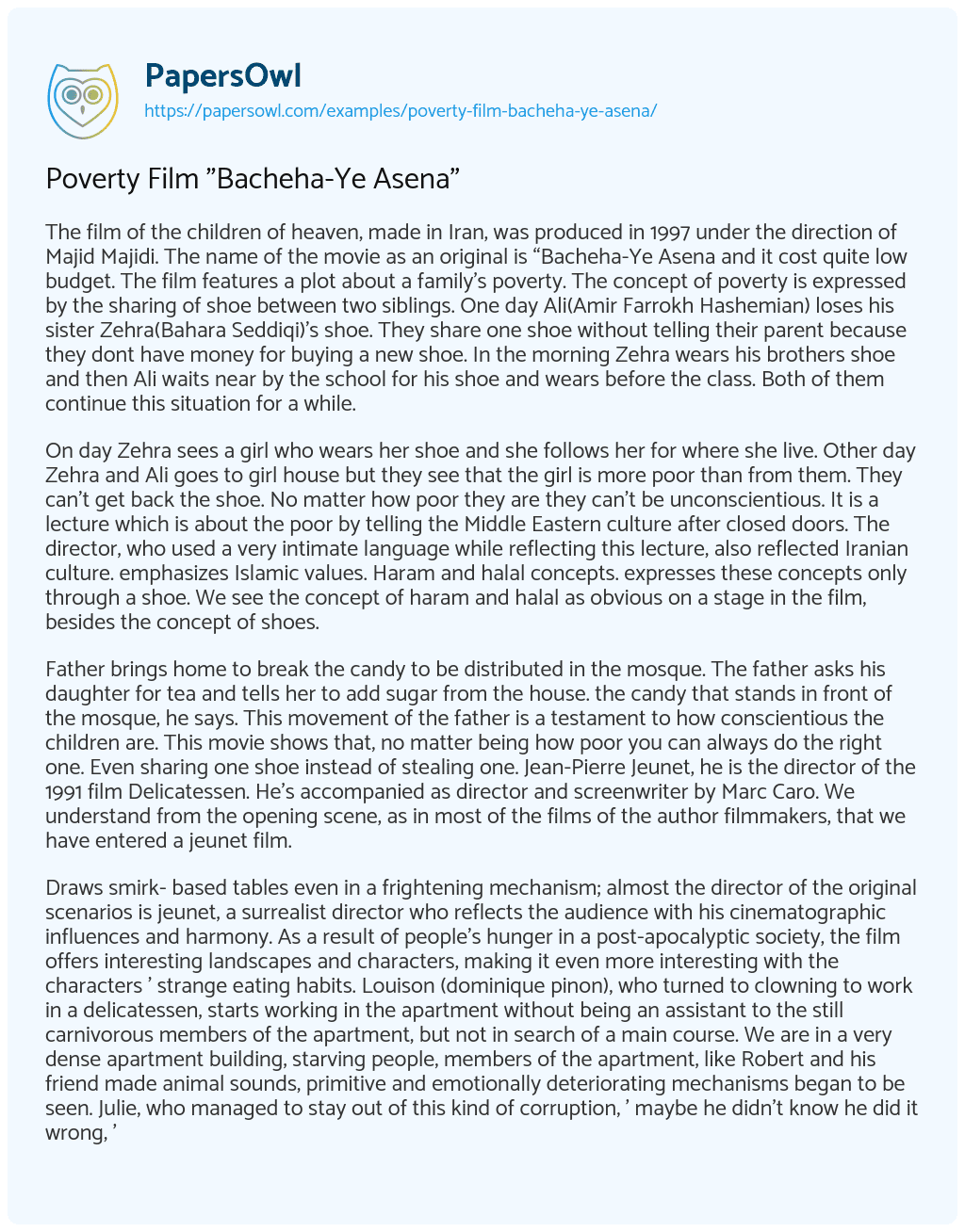 The film of the children of heaven, made in Iran, was produced in 1997 under the direction of Majid Majidi. The name of the movie as an original is “Bacheha-Ye Asena and it cost quite low budget. The film features a plot about a family’s poverty. The concept of poverty is expressed by the sharing of shoe between two siblings. One day Ali(Amir Farrokh Hashemian) loses his sister Zehra(Bahara Seddiqi)’s shoe. They share one shoe without telling their parent because they dont have money for buying a new shoe. In the morning Zehra wears his brothers shoe and then Ali waits near by the school for his shoe and wears before the class. Both of them continue this situation for a while.

On day Zehra sees a girl who wears her shoe and she follows her for where she live. Other day Zehra and Ali goes to girl house but they see that the girl is more poor than from them. They can’t get back the shoe. No matter how poor they are they can’t be unconscientious. It is a lecture which is about the poor by telling the Middle Eastern culture after closed doors. The director, who used a very intimate language while reflecting this lecture, also reflected Iranian culture. emphasizes Islamic values. Haram and halal concepts. expresses these concepts only through a shoe. We see the concept of haram and halal as obvious on a stage in the film, besides the concept of shoes.

Father brings home to break the candy to be distributed in the mosque. The father asks his daughter for tea and tells her to add sugar from the house. the candy that stands in front of the mosque, he says. This movement of the father is a testament to how conscientious the children are. This movie shows that, no matter being how poor you can always do the right one. Even sharing one shoe instead of stealing one. Jean-Pierre Jeunet, he is the director of the 1991 film Delicatessen. He’s accompanied as director and screenwriter by Marc Caro. We understand from the opening scene, as in most of the films of the author filmmakers, that we have entered a jeunet film.

Draws smirk- based tables even in a frightening mechanism; almost the director of the original scenarios is jeunet, a surrealist director who reflects the audience with his cinematographic influences and harmony. As a result of people’s hunger in a post-apocalyptic society, the film offers interesting landscapes and characters, making it even more interesting with the characters ‘ strange eating habits. Louison (dominique pinon), who turned to clowning to work in a delicatessen, starts working in the apartment without being an assistant to the still carnivorous members of the apartment, but not in search of a main course. We are in a very dense apartment building, starving people, members of the apartment, like Robert and his friend made animal sounds, primitive and emotionally deteriorating mechanisms began to be seen. Julie, who managed to stay out of this kind of corruption, ‘ maybe he didn’t know he did it wrong, ‘ led his father, the butcher, to the fascism of the apartment building he formed. He takes the legumes from everyone else in the apartment building and gives them meat. the meat he gives here is actually human flesh, and the butcher keeps control of the hunger in humans. The butcher even kept them in control, and even allowed them to sacrifice one of their own. We can see that hungry makes people desperate and even more makes them cannibal. The authority of the dominance over the helpless people has been revealed very easily.

Film Adaptation of Everything is Illuminated: Hit or Miss?

The Glass Castle Novel Vs. Film