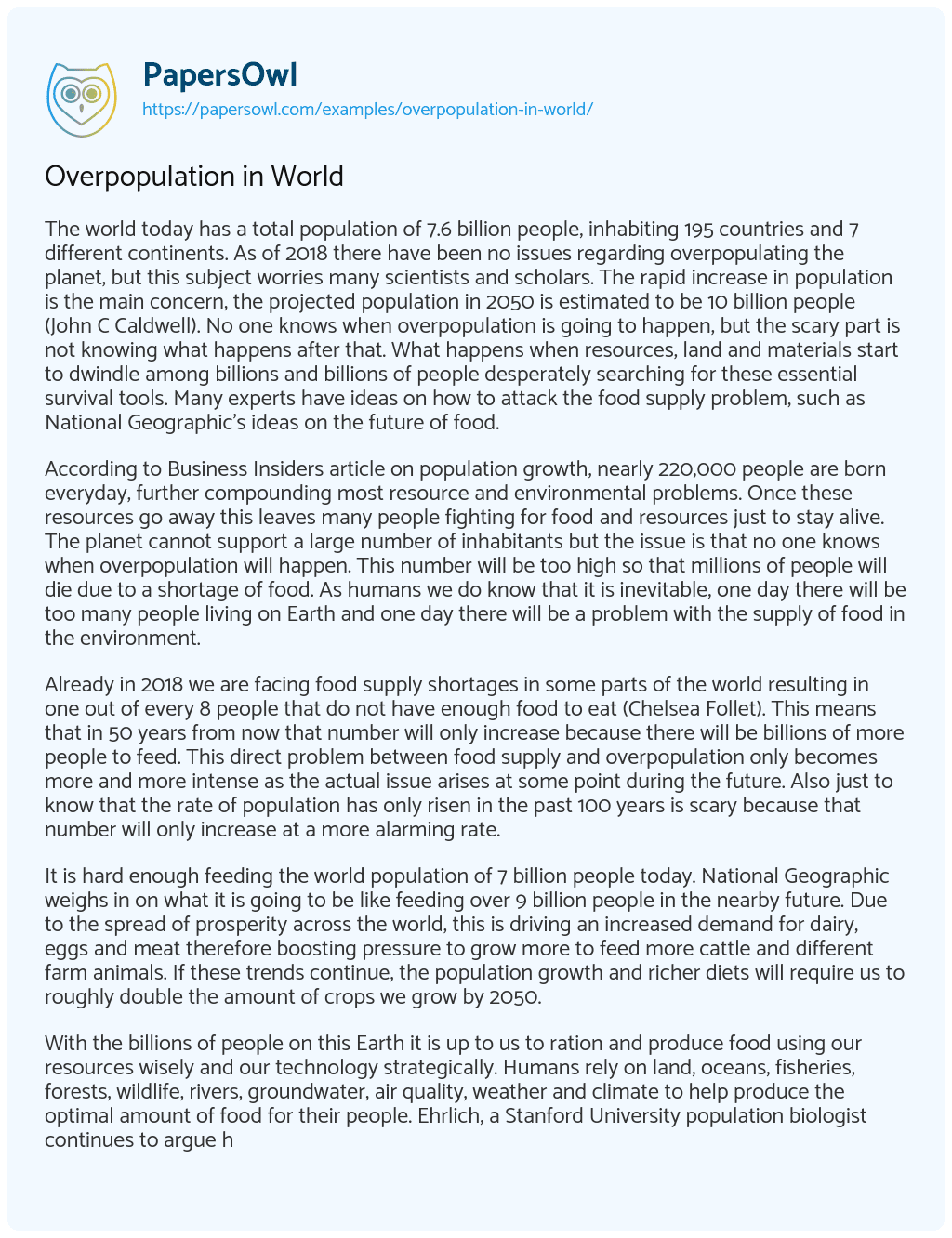 The world today has a total population of 7.6 billion people, inhabiting 195 countries and 7 different continents. As of 2018 there have been no issues regarding overpopulating the planet, but this subject worries many scientists and scholars. The rapid increase in population is the main concern, the projected population in 2050 is estimated to be 10 billion people (John C Caldwell). No one knows when overpopulation is going to happen, but the scary part is not knowing what happens after that. What happens when resources, land and materials start to dwindle among billions and billions of people desperately searching for these essential survival tools. Many experts have ideas on how to attack the food supply problem, such as National Geographic’s ideas on the future of food.

According to Business Insiders article on population growth, nearly 220,000 people are born everyday, further compounding most resource and environmental problems. Once these resources go away this leaves many people fighting for food and resources just to stay alive. The planet cannot support a large number of inhabitants but the issue is that no one knows when overpopulation will happen. This number will be too high so that millions of people will die due to a shortage of food. As humans we do know that it is inevitable, one day there will be too many people living on Earth and one day there will be a problem with the supply of food in the environment.

Already in 2018 we are facing food supply shortages in some parts of the world resulting in one out of every 8 people that do not have enough food to eat (Chelsea Follet). This means that in 50 years from now that number will only increase because there will be billions of more people to feed. This direct problem between food supply and overpopulation only becomes more and more intense as the actual issue arises at some point during the future. Also just to know that the rate of population has only risen in the past 100 years is scary because that number will only increase at a more alarming rate.

It is hard enough feeding the world population of 7 billion people today. National Geographic weighs in on what it is going to be like feeding over 9 billion people in the nearby future. Due to the spread of prosperity across the world, this is driving an increased demand for dairy, eggs and meat therefore boosting pressure to grow more to feed more cattle and different farm animals. If these trends continue, the population growth and richer diets will require us to roughly double the amount of crops we grow by 2050.

With the billions of people on this Earth it is up to us to ration and produce food using our resources wisely and our technology strategically. Humans rely on land, oceans, fisheries, forests, wildlife, rivers, groundwater, air quality, weather and climate to help produce the optimal amount of food for their people. Ehrlich, a Stanford University population biologist continues to argue how humanity is heading for calamity. He believes that our biggest issue is not just the number of people on this Earth but the amount of food consumption of natural resources.

Since World War II the world population has nearly tripled resulting in a dramatic increase of human activity through the damming of rivers, excessive water use, expansion of cropland, increased use of irrigation, a loss of forests, and motor vehicles polluting airways. The most important activity however is the expansion of cropland. Many farms have begun to expand their land not only for an increase in revenue for them, but for an overall food increase that will be disbursed around the world.

Our biggest impact we make on the rising issue of the populations’ food supply is agriculture. As viewed by National Geographic they believe that humans must follow a 5 step process to increase food supply amongst billions of people. Step one is to freeze agriculture’s footprint. This means that humans must stop clearing land in certain areas for more agriculture to be produced. Destroying ecosystems and trading tropical forest for farmland is one of the most destructive things we do to the environment. It has barely done anything to benefit the 850 million people in the world who are still hungry. Most of the land cleared for agriculture in the tropics does not contribute much to the world’s food security but is instead used to produce certain things like soybeans, timber and palm oil. All of these resources are essential for survival yet don’t contribute to the food supply in an effective way.

Step 2 of the National Geographic plan to increase food supply for the world population is to produce more crops on the existing farms we have today. Starting in the 1960’s using better crop varieties, more fertilizer, irrigation and machines has had major environmental costs to the planet. In places like Latin America, Africa and Europe this problem is more apparent where there are yield gaps between current production levels and those possible with improved farming practices. Using high-tech farming systems, as well as approaches borrowed from organic farming, we could boost yields in these places several times over.

Similar to step 2 by using farms more efficiently we must also use our resources more efficiently. Commercial farming has started to make huge strides, finding innovative ways to better apply fertilizers and pesticides by using computerized tractors equipped with advanced sensors and GPS. Many growers apply customized blends of fertilizer tailored to their exact soil conditions, which helps minimize the runoff of chemicals into nearby waterways. Different from commercial farming, organic farming can greatly reduce the use of water and chemicals by incorporating cover crops, mulches, and compost to improve soil quality, conserve water, and build up nutrients. Many farmers have also gotten smarter about water, replacing inefficient irrigation systems with more precise methods, like subsurface drip irrigation. Advances in both conventional and organic farming can give us more crop per drop from our water and nutrients.

During step 4 it is strongly advised we change our diets. Finding more efficient ways to grow meat and shifting to less meat-intensive diets even just switching from grain-fed beef to meats like chicken, pork, or pasture-raised beef could free up substantial amounts of food across the world. People in developing countries are unlikely to eat less meat in the near future, given their newfound prosperity, we can first focus on countries that already have meat-rich diets such as those in Europe and North America. Curtailing the use of food crops for biofuels could also go a long way toward enhancing food availability.

Finally step 5 includes reducing waste to help keep a clean and nutrient filled planet. In poor countries food is often lost between the farmer and the market, due to unreliable storage and transportation. Consumers in developed countries could reduce waste by taking such simple steps as serving smaller portions, eating leftovers, and encouraging cafeterias, restaurants, and supermarkets to develop waste-reducing measures. Of all of the options for boosting food availability, tackling waste would be one of the most effective.

By following these 5 steps we have a good chance at controlling our population to food ratio much better. When this problem of starvation and lack of resources occurs is unclear in the near future but allowing ourselves to respect our land will have a great impact on the food supply worldwide. Overpopulation is inevitable but it is our job as humans to control the amount of food and resources we consume.