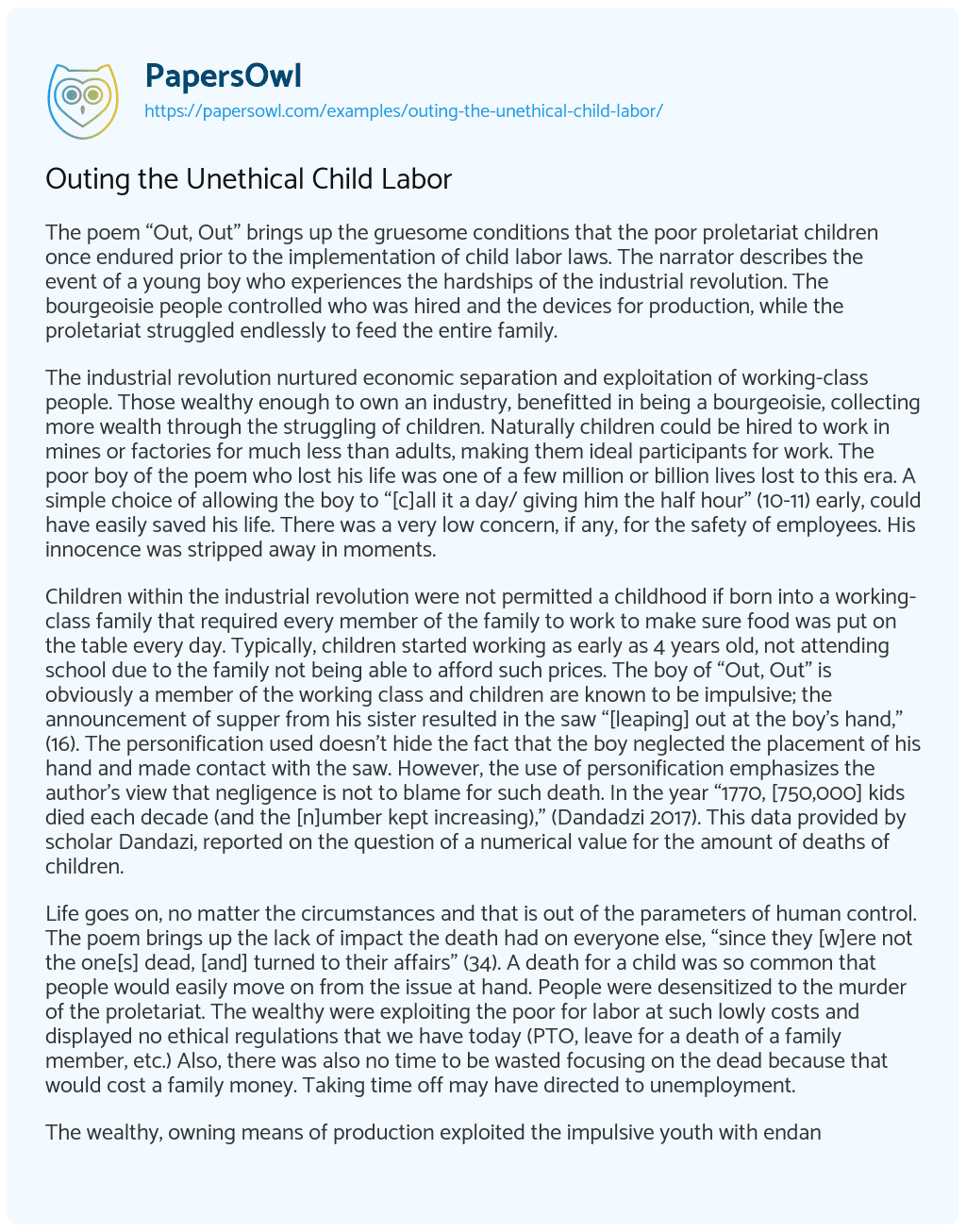 The poem “Out, Out” brings up the gruesome conditions that the poor proletariat children once endured prior to the implementation of child labor laws. The narrator describes the event of a young boy who experiences the hardships of the industrial revolution. The bourgeoisie people controlled who was hired and the devices for production, while the proletariat struggled endlessly to feed the entire family.

The industrial revolution nurtured economic separation and exploitation of working-class people. Those wealthy enough to own an industry, benefitted in being a bourgeoisie, collecting more wealth through the struggling of children. Naturally children could be hired to work in mines or factories for much less than adults, making them ideal participants for work. The poor boy of the poem who lost his life was one of a few million or billion lives lost to this era. A simple choice of allowing the boy to “[c]all it a day/ giving him the half hour” (10-11) early, could have easily saved his life. There was a very low concern, if any, for the safety of employees. His innocence was stripped away in moments.

Children within the industrial revolution were not permitted a childhood if born into a working-class family that required every member of the family to work to make sure food was put on the table every day. Typically, children started working as early as 4 years old, not attending school due to the family not being able to afford such prices. The boy of “Out, Out” is obviously a member of the working class and children are known to be impulsive; the announcement of supper from his sister resulted in the saw “[leaping] out at the boy’s hand,” (16). The personification used doesn’t hide the fact that the boy neglected the placement of his hand and made contact with the saw. However, the use of personification emphasizes the author’s view that negligence is not to blame for such death. In the year “1770, [750,000] kids died each decade (and the [n]umber kept increasing),” (Dandadzi 2017). This data provided by scholar Dandazi, reported on the question of a numerical value for the amount of deaths of children.

Life goes on, no matter the circumstances and that is out of the parameters of human control. The poem brings up the lack of impact the death had on everyone else, “since they [w]ere not the one[s] dead, [and] turned to their affairs” (34). A death for a child was so common that people would easily move on from the issue at hand. People were desensitized to the murder of the proletariat. The wealthy were exploiting the poor for labor at such lowly costs and displayed no ethical regulations that we have today (PTO, leave for a death of a family member, etc.) Also, there was also no time to be wasted focusing on the dead because that would cost a family money. Taking time off may have directed to unemployment.

The wealthy, owning means of production exploited the impulsive youth with endangering environments. Wedging apart the economical gap between classes through low wages. The boy of the poem unfortunately was one of many victims of this epidemic.