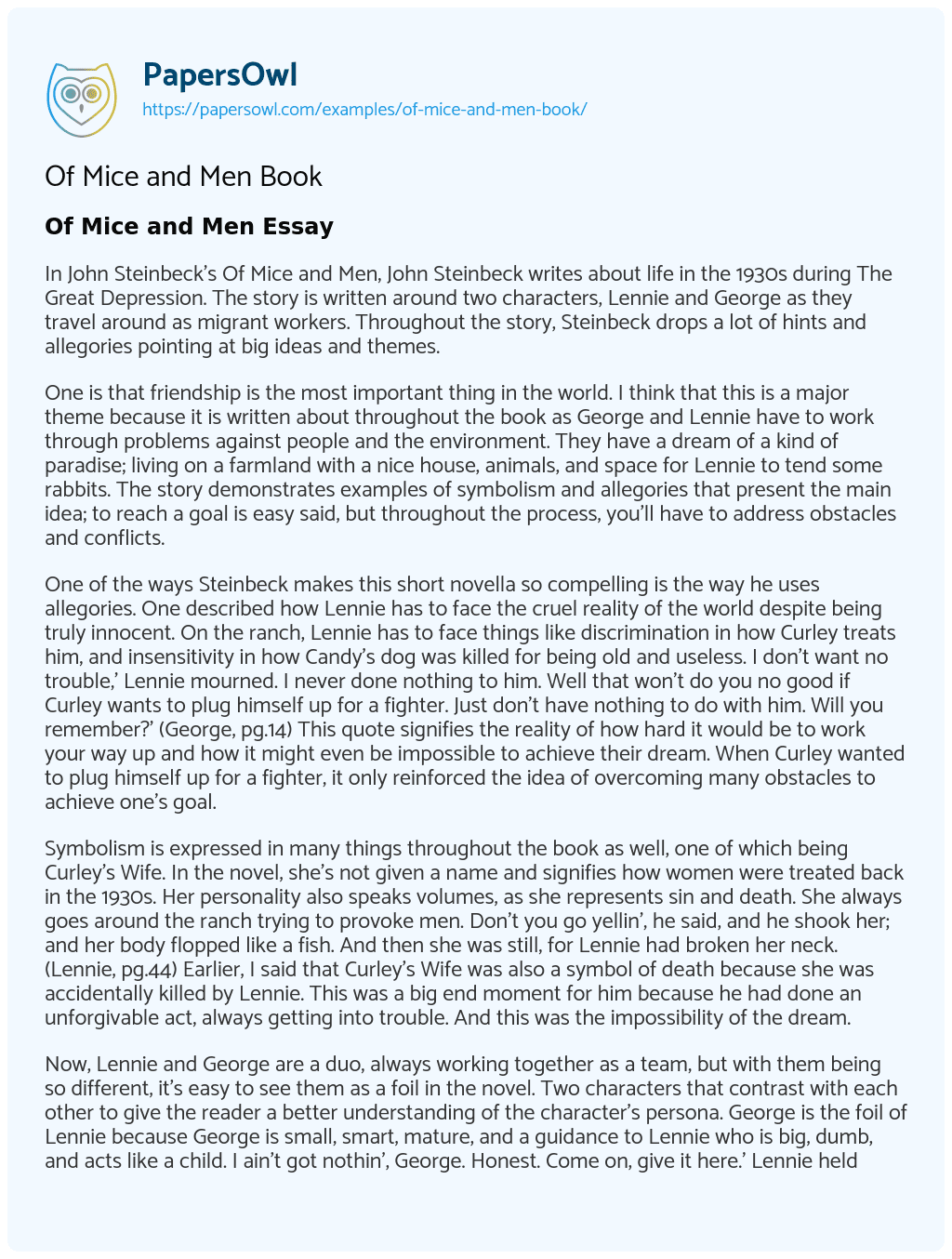 Of Mice and Men Essay

In John Steinbeck’s Of Mice and Men, John Steinbeck writes about life in the 1930s during The Great Depression. The story is written around two characters, Lennie and George as they travel around as migrant workers. Throughout the story, Steinbeck drops a lot of hints and allegories pointing at big ideas and themes.

One is that friendship is the most important thing in the world. I think that this is a major theme because it is written about throughout the book as George and Lennie have to work through problems against people and the environment. They have a dream of a kind of paradise; living on a farmland with a nice house, animals, and space for Lennie to tend some rabbits. The story demonstrates examples of symbolism and allegories that present the main idea; to reach a goal is easy said, but throughout the process, you’ll have to address obstacles and conflicts.

One of the ways Steinbeck makes this short novella so compelling is the way he uses allegories. One described how Lennie has to face the cruel reality of the world despite being truly innocent. On the ranch, Lennie has to face things like discrimination in how Curley treats him, and insensitivity in how Candy’s dog was killed for being old and useless. I don’t want no trouble,’ Lennie mourned. I never done nothing to him. Well that won’t do you no good if Curley wants to plug himself up for a fighter. Just don’t have nothing to do with him. Will you remember?’ (George, pg.14) This quote signifies the reality of how hard it would be to work your way up and how it might even be impossible to achieve their dream. When Curley wanted to plug himself up for a fighter, it only reinforced the idea of overcoming many obstacles to achieve one’s goal.

Symbolism is expressed in many things throughout the book as well, one of which being Curley’s Wife. In the novel, she’s not given a name and signifies how women were treated back in the 1930s. Her personality also speaks volumes, as she represents sin and death. She always goes around the ranch trying to provoke men. Don’t you go yellin’, he said, and he shook her; and her body flopped like a fish. And then she was still, for Lennie had broken her neck. (Lennie, pg.44) Earlier, I said that Curley’s Wife was also a symbol of death because she was accidentally killed by Lennie. This was a big end moment for him because he had done an unforgivable act, always getting into trouble. And this was the impossibility of the dream.

Now, Lennie and George are a duo, always working together as a team, but with them being so different, it’s easy to see them as a foil in the novel. Two characters that contrast with each other to give the reader a better understanding of the character’s persona. George is the foil of Lennie because George is small, smart, mature, and a guidance to Lennie who is big, dumb, and acts like a child. I ain’t got nothin’, George. Honest. Come on, give it here.’ Lennie held his closed hand away from George’s direction. It’s on’y a mouse, George.’ On the ranch, as they work with others on the ranch, the other workers also realize this. Sometimes, Lennie makes bad decisions and has to be guided. George at times talks about how much easier life might be to work alone without Lennie getting into all sorts of troubles. Making this decision to kill Lennie a choice of solitude, a barrier to overcome, looking towards that goal.

John Steinbeck presents his ideas on the social world through the idea that achieving a goal is easier said than done. He writes about the tragedy of these character’s lives on a short walk as they persevere and overcome obstacles. Some might even say that Steinbeck was telling us the aspects of life and how you might even look back on life differently.