Oedipus is a Tragic Hero 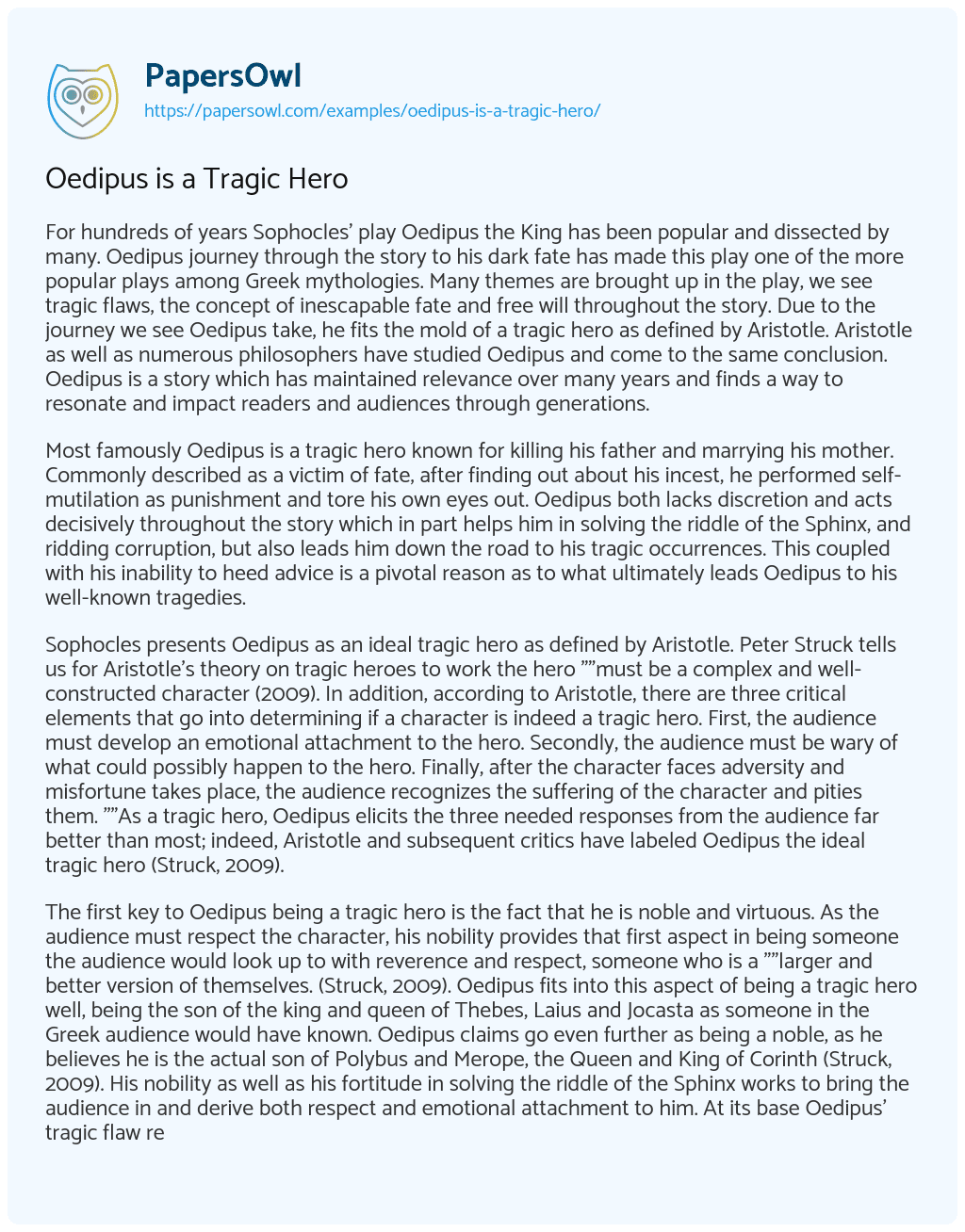 For hundreds of years Sophocles’ play Oedipus the King has been popular and dissected by many. Oedipus journey through the story to his dark fate has made this play one of the more popular plays among Greek mythologies. Many themes are brought up in the play, we see tragic flaws, the concept of inescapable fate and free will throughout the story. Due to the journey we see Oedipus take, he fits the mold of a tragic hero as defined by Aristotle. Aristotle as well as numerous philosophers have studied Oedipus and come to the same conclusion. Oedipus is a story which has maintained relevance over many years and finds a way to resonate and impact readers and audiences through generations.

Most famously Oedipus is a tragic hero known for killing his father and marrying his mother. Commonly described as a victim of fate, after finding out about his incest, he performed self-mutilation as punishment and tore his own eyes out. Oedipus both lacks discretion and acts decisively throughout the story which in part helps him in solving the riddle of the Sphinx, and ridding corruption, but also leads him down the road to his tragic occurrences. This coupled with his inability to heed advice is a pivotal reason as to what ultimately leads Oedipus to his well-known tragedies.

Sophocles presents Oedipus as an ideal tragic hero as defined by Aristotle. Peter Struck tells us for Aristotle’s theory on tragic heroes to work the hero “”must be a complex and well-constructed character (2009). In addition, according to Aristotle, there are three critical elements that go into determining if a character is indeed a tragic hero. First, the audience must develop an emotional attachment to the hero. Secondly, the audience must be wary of what could possibly happen to the hero. Finally, after the character faces adversity and misfortune takes place, the audience recognizes the suffering of the character and pities them. “”As a tragic hero, Oedipus elicits the three needed responses from the audience far better than most; indeed, Aristotle and subsequent critics have labeled Oedipus the ideal tragic hero (Struck, 2009).

The first key to Oedipus being a tragic hero is the fact that he is noble and virtuous. As the audience must respect the character, his nobility provides that first aspect in being someone the audience would look up to with reverence and respect, someone who is a “”larger and better version of themselves. (Struck, 2009). Oedipus fits into this aspect of being a tragic hero well, being the son of the king and queen of Thebes, Laius and Jocasta as someone in the Greek audience would have known. Oedipus claims go even further as being a noble, as he believes he is the actual son of Polybus and Merope, the Queen and King of Corinth (Struck, 2009). His nobility as well as his fortitude in solving the riddle of the Sphinx works to bring the audience in and derive both respect and emotional attachment to him. At its base Oedipus’ tragic flaw revolves around his idea of his own identity, in that it is incorrect. There is nothing Oedipus could do to change this as it is completely out of his control or ability to understand, essentially this flaw is not something you can blame on Oedipus. Due to this flaw being out of the characters control, the audience inherently fears for Oedipus’ fate because there is little to nothing that can be done on the characters part to change the outcome.

According to Aristotle, after the character has elicited an emotional response and attachment from the audience, coupled with respect, the audience must fear for the characters downfall. Oedipus fits this mold well. Aristotle defines a tragic flaw as something that “”indicates that a truly tragic character must have a failing that is neither idiosyncratic nor arbitrary but is somehow more deeply imbedded — a kind of human failing and human weakness (Struck, 2009). While his pride had helped lead to his eventual downfall, fate played the most crucial role in the events unfolding as they did. This sense of unavoidable fate works to simultaneously make the audience fear for the character while not making the audience lose any of the respect they have gained for the character.

Charles Reeves tells us as it relates to the Aristotelian role of a tragic hero is one “”whose misfortune, however, brought upon him not by vice and depravity but by some error of judgment, of the number of those in the enjoyment of great reputation and prosperity; e.g. Oedipus (1952). This concept of a tragic hero is met with Oedipus’ strength of being a decisive leader, while in contrast he is unable to listen to advice and act with discretion and is ignorant, through no fault of his own to his true identity. Marjorie Barstow goes deeper into what kind of a man Oedipus is and tells us “”when we analyze the character of Oedipus, we discover that, in spite of much natural greatness of soul, he is, in one vital respect, the exact antithesis of Aristotle’s ideal man. He has no clear vision which enables him to examine every side of a matter with unclouded eyes and see all things in due perspective (1912, p.3). One thing that helped lead us to the notion that Oedipus is a tragic hero is that his downfall is preceded with him becoming the king after saving the population of Thebes. Following this he finds that he has really married his mother and killed his own father. This drastic change or switch in fortune coupled with our respect for the Oedipus and fear of his downfall leads us the last aspect of being a tragic hero according to Aristotle.

The respect as well as the fear of disaster the audience feels for Oedipus leads to a true and great sense of pity for the character following his downfall. Oedipus actions following his tragedy help cement this sense of pity. “”First, by blinding himself, as opposed to committing suicide, Oedipus achieves a kind of surrogate death that intensifies his suffering (Struck, 2009). After doing this he basically receives none of the benefits of those who are alive, while not technically being dead. In a sense this is a fate worse than death which resonates with the audience and furthers their pity of him. Sophocles goes one step further in that he ends Oedipus the King with Oedipus suffering, while this suffering lets the audience know that the suffering will have no end, there is a simultaneous feeling of closure. “”This odd amalgam of continued suffering and closure make the audience feel as if Oedipus’ suffering is his proper and natural state. Clearly, Oedipus’ unique downfall demands greater pity form the audience (Strock, 2009).

Aristotle’s own words seem to further this notion when said “”even without the aid of the eye, he who hears the tale told will thrill with horror and melt to pity at what takes place (Barstow, 1912). While Oedipus was a work of fiction it draws certain parallels to the story of Joseph in the Bible. They are similar in that Joseph also received prophecies. In an attempt to prevent the prophecy, his brothers left Joseph for death in a pit. Josephs brothers doing this actually end up leading to the fulfillment of the prophesy, that Joseph would rule over his brothers and become king of Egypt. “”Can we find a man like this, in whom is the Spirit of God? Then pharaoh said to Joseph, ‘Since God has shown you all this, there is none so discerning and wise as you are. You shall be over my house, and all my people shall order themselves as you command. (Genisis 41: 38-40, ESV). While there are clearly great differences in the story of Joseph and the fiction of Oedipus, there are certain parallels that are worth looking into.

Oedipus meets or exceeds all of the parameters of what it means to be a tragic hero within Aristotle’s definition. He is character with a lot of depth who and is successful in bonding with the audience. This bonding with the audience as well as the respect the audience has for his position helps lead to a genuine fear of what could become of him and importantly this fear does not come at the cost of any respect for Oedipus. The final aspect of being a true Aristotelian tragic hero, is a profound sense of pity for the character. This is where Oedipus is almost in a characterization of his own. The pity elicited from the audience comes in waves, first as he realizes he killed his father and married his mother, then as what was just gained is now lost. This is followed by the cutting out of his own eyes, and the state of perpetual misery that takes place and does not finalize as it continues through the plays end and leaves the audience feeling that the end of the story is the never-ending suffering of Oedipus. Using Aristotle’s own words, he not just a tragic hero because of this but was given the title as “”the ideal tragic hero.

Oedipus is a Tragic Hero. (2019, Aug 07). Retrieved from https://papersowl.com/examples/oedipus-is-a-tragic-hero/

The Tragic Hero Death of a Salesman