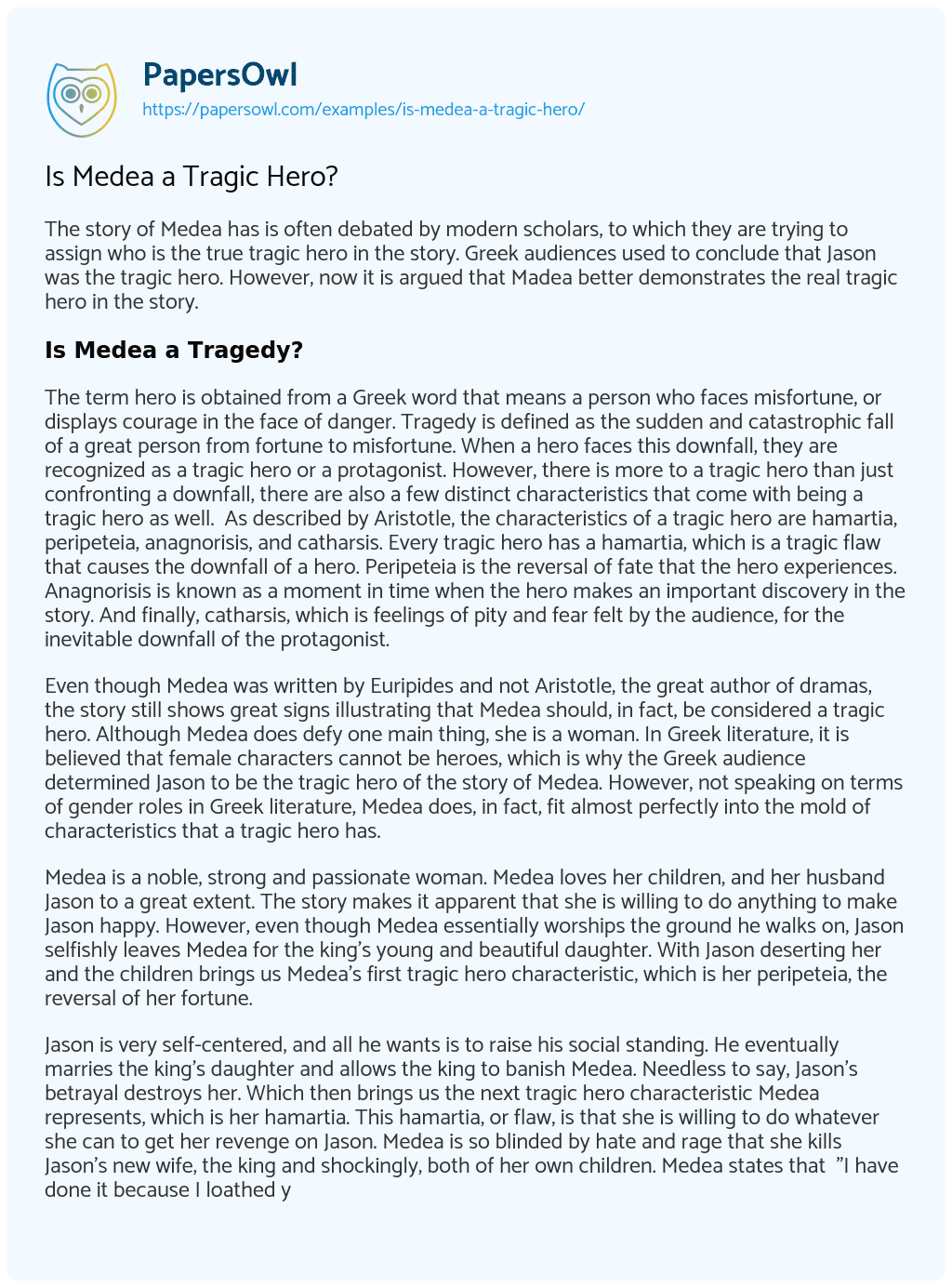 Is Medea a Tragedy?

The term hero is obtained from a Greek word that means a person who faces misfortune, or displays courage in the face of danger. Tragedy is defined as the sudden and catastrophic fall of a great person from fortune to misfortune. When a hero faces this downfall, they are recognized as a tragic hero or a protagonist. However, there is more to a tragic hero than just confronting a downfall, there are also a few distinct characteristics that come with being a tragic hero as well.  As described by Aristotle, the characteristics of a tragic hero are hamartia, peripeteia, anagnorisis, and catharsis. Every tragic hero has a hamartia, which is a tragic flaw that causes the downfall of a hero. Peripeteia is the reversal of fate that the hero experiences. Anagnorisis is known as a moment in time when the hero makes an important discovery in the story. And finally, catharsis, which is feelings of pity and fear felt by the audience, for the inevitable downfall of the protagonist.

Even though Medea was written by Euripides and not Aristotle, the great author of dramas,  the story still shows great signs illustrating that Medea should, in fact, be considered a tragic hero. Although Medea does defy one main thing, she is a woman. In Greek literature, it is believed that female characters cannot be heroes, which is why the Greek audience determined Jason to be the tragic hero of the story of Medea. However, not speaking on terms of gender roles in Greek literature, Medea does, in fact, fit almost perfectly into the mold of characteristics that a tragic hero has.

Medea is a noble, strong and passionate woman. Medea loves her children, and her husband Jason to a great extent. The story makes it apparent that she is willing to do anything to make Jason happy. However, even though Medea essentially worships the ground he walks on, Jason selfishly leaves Medea for the king’s young and beautiful daughter. With Jason deserting her and the children brings us Medea’s first tragic hero characteristic, which is her peripeteia, the reversal of her fortune.

Jason is very self-centered, and all he wants is to raise his social standing. He eventually marries the king’s daughter and allows the king to banish Medea. Needless to say, Jason’s betrayal destroys her. Which then brings us the next tragic hero characteristic Medea represents, which is her hamartia. This hamartia, or flaw, is that she is willing to do whatever she can to get her revenge on Jason. Medea is so blinded by hate and rage that she kills Jason’s new wife, the king and shockingly, both of her own children. Medea states that  “I have done it because I loathed you more than I loved them…” (Medea, lines 326-327).

After letting her hamartia get the best of her resulting in rash acts, follows Medea’s anagnorisis. This is where she realizes the truth of her tragic situation. Medea started her life as a strong, powerful woman. She lost control of her life because of her vast love for Jason. She had a sudden, compelling realization once Jason abandoned her that it was all a fraud of his selfish ways. The gods are on Medea’s side, and they sent her a chariot pulled by dragons to allow her to escape. To which she then moves on to be a strong character with a new life in Athens.

The story of Medea also has the characteristic of catharsis, as that is where the audience comes into place. The story is set up to release the audience’s emotions of anger and revenge. The audience experiences this when Jason betrays her and runs off with another woman, and they watch Medea’s anger and rage rise throughout the story. Another form of catharsis shown is fear, the audience experiences this fear of Medea as she kills the king, his daughter, and her own children.

Is Medea a Tragic Hero?. (2020, Jan 21). Retrieved from https://papersowl.com/examples/is-medea-a-tragic-hero/

Relationship of Jason, Creon and Medea

Oedipus is a Tragic Hero