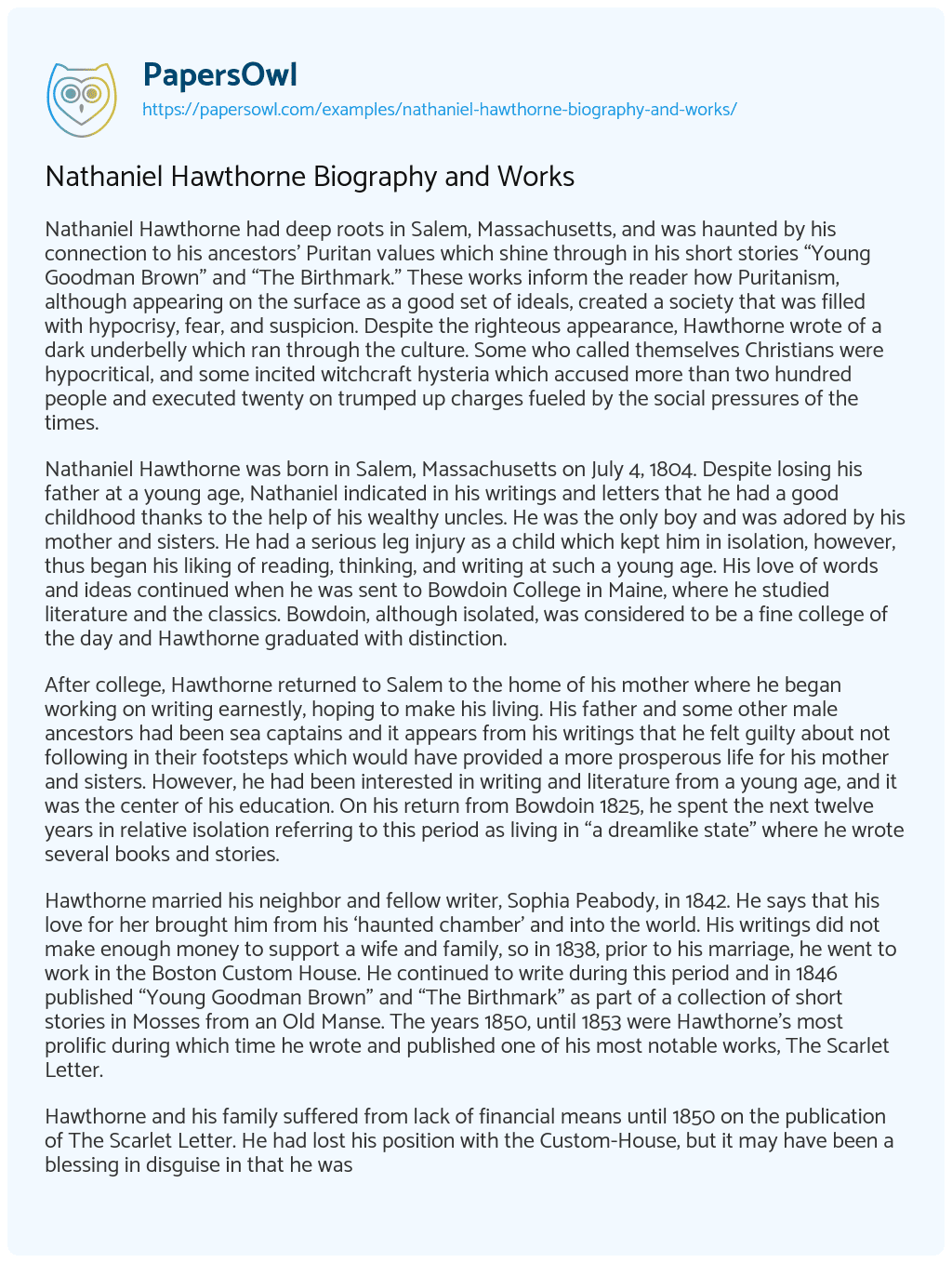 Nathaniel Hawthorne had deep roots in Salem, Massachusetts, and was haunted by his connection to his ancestors’ Puritan values which shine through in his short stories “Young Goodman Brown” and “The Birthmark.” These works inform the reader how Puritanism, although appearing on the surface as a good set of ideals, created a society that was filled with hypocrisy, fear, and suspicion. Despite the righteous appearance, Hawthorne wrote of a dark underbelly which ran through the culture. Some who called themselves Christians were hypocritical, and some incited witchcraft hysteria which accused more than two hundred people and executed twenty on trumped up charges fueled by the social pressures of the times.

Nathaniel Hawthorne was born in Salem, Massachusetts on July 4, 1804. Despite losing his father at a young age, Nathaniel indicated in his writings and letters that he had a good childhood thanks to the help of his wealthy uncles. He was the only boy and was adored by his mother and sisters. He had a serious leg injury as a child which kept him in isolation, however, thus began his liking of reading, thinking, and writing at such a young age. His love of words and ideas continued when he was sent to Bowdoin College in Maine, where he studied literature and the classics. Bowdoin, although isolated, was considered to be a fine college of the day and Hawthorne graduated with distinction.

After college, Hawthorne returned to Salem to the home of his mother where he began working on writing earnestly, hoping to make his living. His father and some other male ancestors had been sea captains and it appears from his writings that he felt guilty about not following in their footsteps which would have provided a more prosperous life for his mother and sisters. However, he had been interested in writing and literature from a young age, and it was the center of his education. On his return from Bowdoin 1825, he spent the next twelve years in relative isolation referring to this period as living in “a dreamlike state” where he wrote several books and stories.

Hawthorne married his neighbor and fellow writer, Sophia Peabody, in 1842. He says that his love for her brought him from his ‘haunted chamber’ and into the world. His writings did not make enough money to support a wife and family, so in 1838, prior to his marriage, he went to work in the Boston Custom House. He continued to write during this period and in 1846 published “Young Goodman Brown” and “The Birthmark” as part of a collection of short stories in Mosses from an Old Manse. The years 1850, until 1853 were Hawthorne’s most prolific during which time he wrote and published one of his most notable works, The Scarlet Letter.

Hawthorne and his family suffered from lack of financial means until 1850 on the publication of The Scarlet Letter. He had lost his position with the Custom-House, but it may have been a blessing in disguise in that he was able to concentrate on completing the book. Once The Scarlet Letter was published, the family had some financial relief and eventually he bought the house formerly owned by Louisa May Alcott’s family.

Much of Hawthorne’s work consists of morality, warning tales about guilt, sin, and retribution for his obsession with his family’s role in the Salem Witch trials of two hundred years prior. He believed he was guilty of sharing his blood with not only his great-great grandfather, John Hathorne, who had been a judge during the trials but with William Hathorne who had been a magistrate. John Hathorne had been the only judge who had not taken responsibility for his part in sentencing innocent people to death for witchcraft. He was haunted by this connection and much of his writing centered around that time and place.

Young Goodman Brown, a short story about one night in a young man’s life that changes his life forever is an example of this connection. It is a tale of tragedy with supernatural tones about a young man who, before his wedding, goes into the woods for an experience he knows to be wrong, but is drawn to it anyway. He meets many of his neighbors and acquaintances all participating in a night of debauchery and sin and he is shocked, appalled and disgusted. He even thinks that he sees his wife-to-be in a compromised state.

Upon his return home, he is unsure if he were in a dream or if he actually met his community members, but it doesn’t matter to him. The memory remains—he has judged them. He has judged himself. He will never again trust that what he sees before him is real. He no longer trusts his wife, his neighbors, and his friends. His life becomes dark and pessimistic through this one experience which he is unable to get beyond. “It will not be the first time that Hawthorne character comes home trapped, confused and lonely.” (Wineapple, 78)

Hawthorne’s haunted thoughts of life in Salem during the witch trials are apparent in this tale. The hypocrisy of his neighbors appearing and acting morally perfect on the outside and evil devil worshippers on that night. His guilt of participating changed his life forever as it must have for many of the Salem community during the witch trials. Even though many involved publicly confessed their guilt, it was through duress. It wasn’t until 1711, years later, that a bill was passed restoring the good names of the victims. Hawthorne’s ancestor was not among those who confessed and that may have been what drove Hawthorne’s obsession with the times.

“The Birthmark,” while not as clearly a comparison to the Salem of the witch trials, does tell us of the need for the main character to see perfection in everything, even risking destruction of the woman he loves most. It tells the story of a scientist, Dr. Alymer, who has a stunning wife, Georgianna, who has a slight defect on her cheek which becomes an obsession to him. Again, it’s obsession. He sees this tiny mark as being a fatal flaw in her beauty so much so that he can see nothing else but the mark when he looks at her. His background in science lets him believe that he may be able to remove it surgically. We learn that he is not as skilled a scientist as he thinks he is.

The wife, although terrified, goes along with him, not because she believes in him, but because she can’t disappoint him. He is an intelligent man, but he has no wisdom. He can’t see the inner beauty. Aylmer shows himself to Georgiana as a brilliant scientist obsessed with perfection; he hides his faults from her. But after reading his journals and learning about the many failures of his experiments, Georgiana realizes that Aylmer, indeed, is a person who makes mistakes.

Like the Puritans, it’s what’s seen on the surface that’s judged. Their world was about behavior, making no allowances for imperfections. Although the small mark on her face is a physical imperfection, it becomes a symbol of the judgment of the Puritan way of life. Hawthorne used symbolism a great deal in his writing. In his laboratory, Aylmer uses pleasant odors and perfumes to relax Georgiana. Hawthorne uses this as a way of pointing out the sinister undertones of his experiments, symbolizing the covering of inadequacy with sweet smells..

Hawthorne wrote about the darkness of the world. He wrote of gloom, guilt, and retribution. The scientist killed his wife because she was flawed. She was human. All humans are flawed. If she had lived, would he have been happy? Would she have still been human had she not be flawed?

Hawthorne uses themes solitude, judgment and the need for perfection. Their inner lives drive them to actions – like Alymer who is driven by ego – like Georgina who gave herself entirely to her husband’s ego knowing she will die – like Goodman Brown who lives a life of isolation after losing faith in his family and community.

Nathaniel Hawthorne Biography and Works. (2021, May 10). Retrieved from https://papersowl.com/examples/nathaniel-hawthorne-biography-and-works/