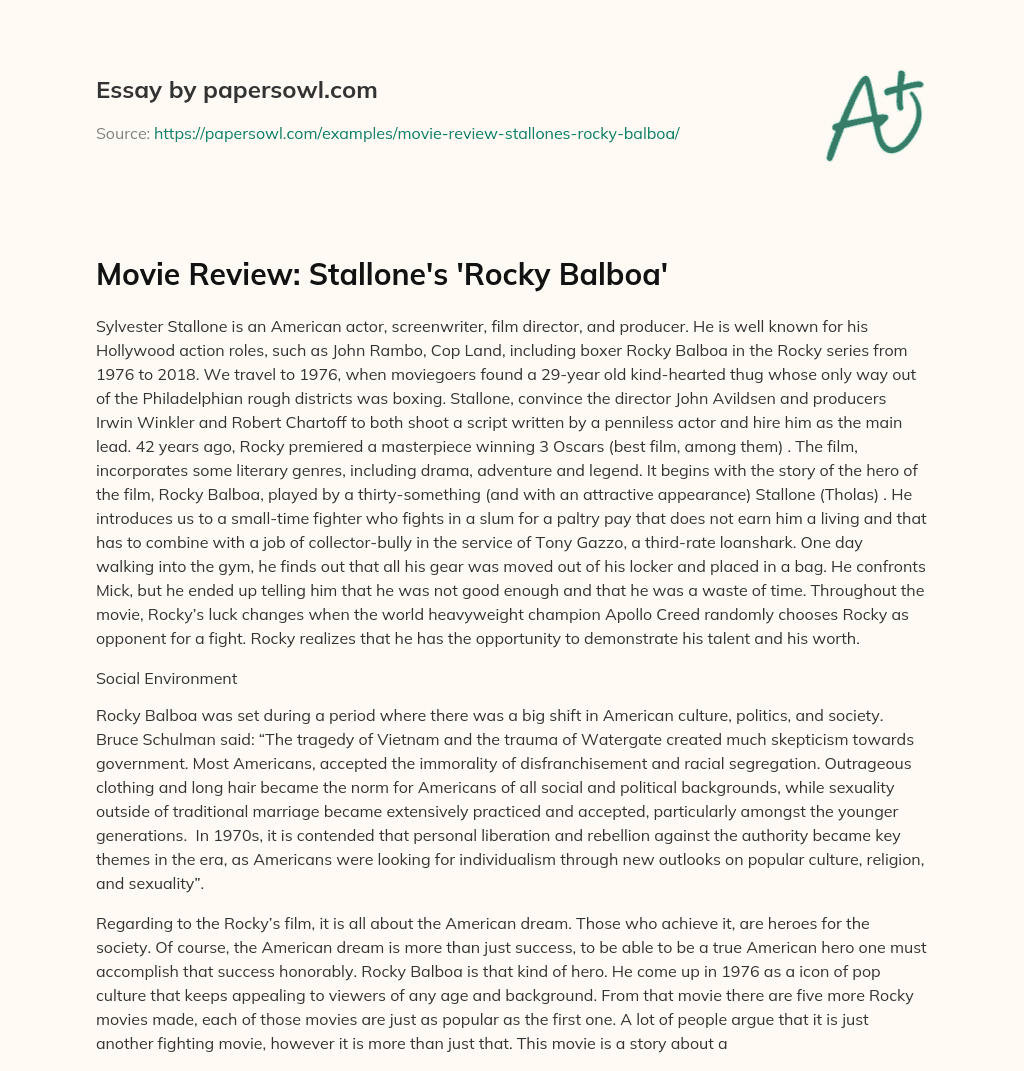 Sylvester Stallone is an American actor, screenwriter, film director, and producer. He is well known for his Hollywood action roles, such as John Rambo, Cop Land, including boxer Rocky Balboa in the Rocky series from 1976 to 2018. We travel to 1976, when moviegoers found a 29-year old kind-hearted thug whose only way out of the Philadelphian rough districts was boxing. Stallone, convince the director John Avildsen and producers Irwin Winkler and Robert Chartoff to both shoot a script written by a penniless actor and hire him as the main lead. 42 years ago, Rocky premiered a masterpiece winning 3 Oscars (best film, among them) . The film, incorporates some literary genres, including drama, adventure and legend. It begins with the story of the hero of the film, Rocky Balboa, played by a thirty-something (and with an attractive appearance) Stallone (Tholas) . He introduces us to a small-time fighter who fights in a slum for a paltry pay that does not earn him a living and that has to combine with a job of collector-bully in the service of Tony Gazzo, a third-rate loanshark. One day walking into the gym, he finds out that all his gear was moved out of his locker and placed in a bag. He confronts Mick, but he ended up telling him that he was not good enough and that he was a waste of time. Throughout the movie, Rocky’s luck changes when the world heavyweight champion Apollo Creed randomly chooses Rocky as opponent for a fight. Rocky realizes that he has the opportunity to demonstrate his talent and his worth.

Rocky Balboa was set during a period where there was a big shift in American culture, politics, and society. Bruce Schulman said: “The tragedy of Vietnam and the trauma of Watergate created much skepticism towards government. Most Americans, accepted the immorality of disfranchisement and racial segregation. Outrageous clothing and long hair became the norm for Americans of all social and political backgrounds, while sexuality outside of traditional marriage became extensively practiced and accepted, particularly amongst the younger generations.  In 1970s, it is contended that personal liberation and rebellion against the authority became key themes in the era, as Americans were looking for individualism through new outlooks on popular culture, religion, and sexuality”.

Regarding to the Rocky’s film, it is all about the American dream. Those who achieve it, are heroes for the society. Of course, the American dream is more than just success, to be able to be a true American hero one must accomplish that success honorably. Rocky Balboa is that kind of hero. He come up in 1976 as a icon of pop culture that keeps appealing to viewers of any age and background. From that movie there are five more Rocky movies made, each of those movies are just as popular as the first one. A lot of people argue that it is just another fighting movie, however it is more than just that. This movie is a story about a fighter, that should not be interpreted as a super muscular fighter, but as a humble character. Rocky represents a story that talks about surpass tragedies, rough times, and broken dreams to find true love, happiness, and, hope. Rocky will always remain as an American hero just because Americans with all kinds of backgrounds and all ethnicities find in him a faithful and caring father, brother, and husband, an example of values, and a huge inspiration to continue fighting against anything that can be presented in life (Tholas).

Balboa born in Italy, never had an easy life. He was a poor immigrant, without education, and with not much hope for his future. He lived alone in a really poor apartment on the streets of Philadelphia, working for a loan shark, boxing in clubs in the local area. His boxing was just enough to pay his bills, and his smoking, drinking and lack of motivation, brought him to get fired (Eval). For his great luck, Apollo Creed, the heavy-weight champion challenge him to a lifetime fight. Even that Apollo is using the fight against him as a charity case, he accepts the challenge. This is the moment when Rocky’s spirit rises as he gives his heart and mind into training fo the great fight. While he trains, the song “Gonna fly now”, is a 70s cop drama guitar, with lyrics saying “Trying hard now, It’s so hard now. Trying har now, getting strong now, won’t be long now”. It became really popular in American culture, and it is often played in sport events because of the movie. Right before the fight started Balboa said “It really don’t matter if I lose this fight…all I wanna do is go the distance…[when] that bell rings, and I’m still standing,

I’m gonna know for the first time in my life…that I weren’t just another bum from the neighborhood.”; starting the fight, Apollo mocks Rocky (Rocky Balboa Movie). However, after all the punches, Balboa was bloody, but still standing in the final round. The sound in the background of this fight, shows an environment where tells its audience to keep fighting, giving all his heart and hope. The crowd cheered enthusiastically, and even that Rocky lost the fight, he definitely won something that is more important, his dignity. He now believes on himself, on what he really is, and on his ability to achieve anything he puts into his mind (Rocky Balboa movie).

First, a huge part of the popularity of Balboa is that his attraction breaks through any ethnic lines. He is a second-generation, poor Italian, who can relate to the rising tide of immigrants in the 70s. Rocky remains popular today because gives a tremendous message to all immigrants that are struggling to accept American culture, and showing that the American dream is possible and open for anyone. Secondly, this film appeals to African Americans as well. In this era, Muhammad Ali was one of the best fighters in the history of boxing. He appeared on the boxing scene more than 50 years ago as an Olympic heavy-weight champion. Even more important, he was a symbol against racism.

Muhammad Ali was first known as Cassius Marcellus Clay, until he adopted his name after his conversion to Islam in 1964, for issues of religion, politics, and race. He refused to go to the military institution, and under those circumstances his heavyweight championship title was taken away and he was forbidden from boxing for three years in the prime of his successful career. It was here where he became an example of battle inside and outside the ring (history.com). On college campuses, Muhammad spoke against the Vietnam war. He had a really hard time fighting for black people’s rights, but he had a huge influence in the Civil Rights Movement. The greatest, got his boxing license reinstated in 1970, and had ten more years of great fights and in 1981 he retired with a career record of 56 wins, five losses and 37 knockouts. After that, he suffered from Parkinson’s disease and later on died on June of 2016 (history.com). For this reason, I completely believe that Muhammad Ali influences Rocky’s film because this movie was one of earliest movies to present a black man, as a leader, educated, wealthy, and, admire figure, seeing there the big arise of civil rights.

Finally, he was not admired just for immigrants and for other people that was struggling, but he also was followed by people that were disappointed by their political leaders. When the movie came out, was in the time where they lost the Vietnam War, and people felt that Watergate failed to them. America was suffering of a downfall and of course needed of someone, a hero, to help the to get out of it. Balboa was that hero for the people. The Rocky film seen as a way to escape from the difficulties that the people in America were confronting. His fight, his spirit, and his effort and passion helped to remind each American that America is a fighter country and Americans do not quit. Americans have support and continue in the fight. Rocky gave people hope again, and healed the broken spirit.

Rocky connects with the people throughout the whole political aspirations because, as I mentioned before, he represents the American dream. In 1984, Ronald Reagan, the conservative leader played Rocky’s song in Ireland. In his National Rifle Association speech, Reagan said “I believe with all my heart that we have turned the corner… and like that fighter, Rocky Balboa, America is getting stronger now”. In the victory speech of Hilary Clinton, she also compared herself to Rocky and played the same theme song saying, ‘When it comes to finishing the fight, Rocky and I have a lot in common. I never quit, and neither do the American people”.

Throughout Balboa’s boxing career, he had to face many obstacles, such as losing his wife to ovarian cancer, losing the championship tittle, the death of two close friends, poverty, and losing part of his vision in one eye. But, he never lost his determination and passion. He will always be the American hero, since 1976 till today. Over four decades that he shows us the courage to keep going and keep fighting.

I really enjoyed this movie because I feel a big connection to the movie, not because I am an American, or because of the history of American in that era. But, just because I am an athlete, a volleyball athlete that has had the opportunity to play against big teams from another universities or even another countries with the Mexican National Team. Countries like Russia, China, Italy, United Stated among others. This movie has taught me that with courage, passion, and heart everything can be possible. The first movie and the series of Rocky Balboa gives me a message and I really like how the movies are presented. Finally, this is one of my favorite quotes by Rocky , ‘The world ain’t all sunshine and rainbows…you…ain’t never gonna hit as hard as life; but it ain’t about how hard you can hit…it’s about how hard you can get hit and keep moving forward”. I really gives you a motivation to keep fighting, that does not matter what comes, what struggles you have, or what you have to face, how you takes those obstacles in your life and overcome them to grow, is what really matters.

Rocky Balboa is my Heroe

Me before you Movie Review