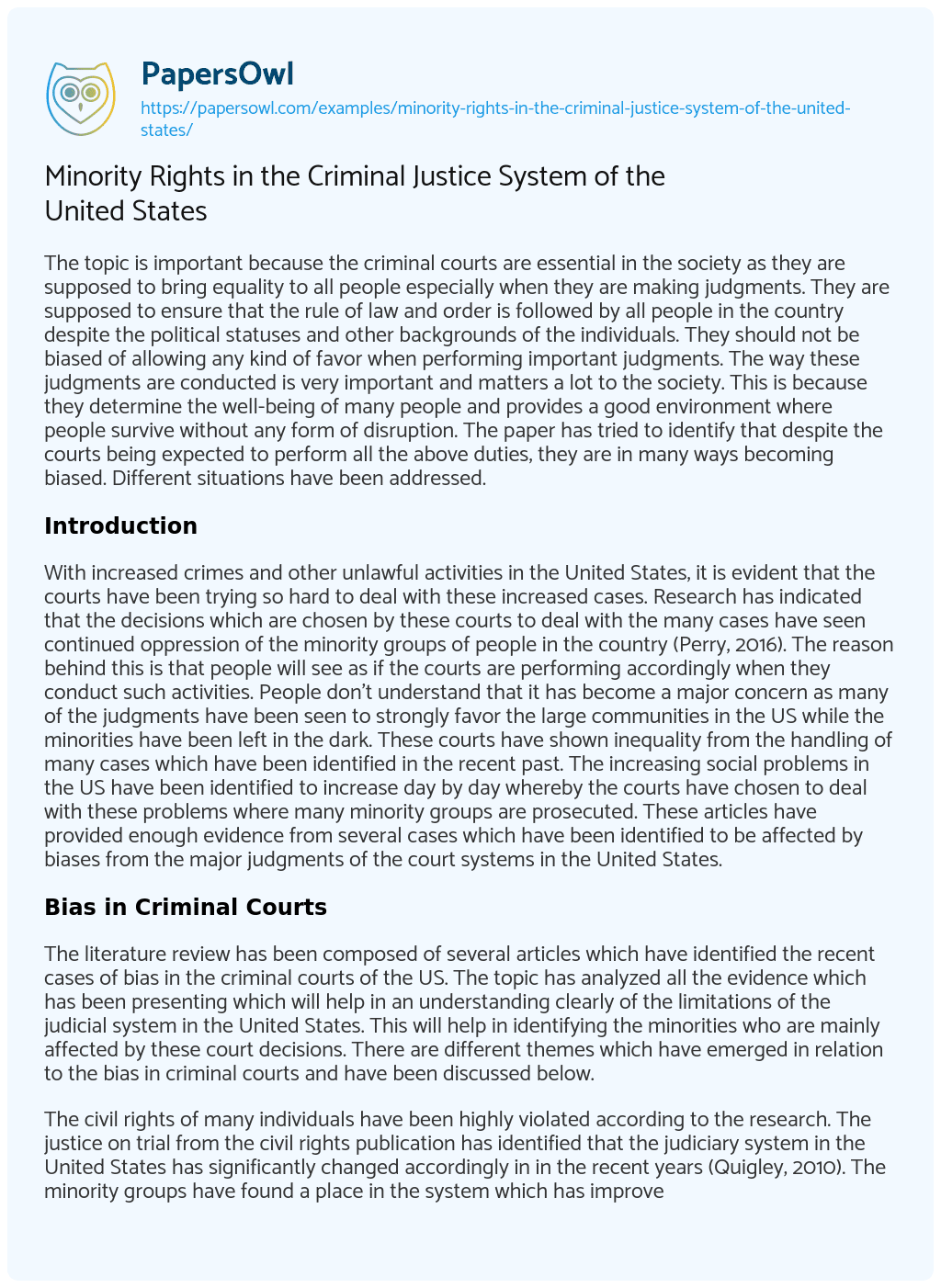 The topic is important because the criminal courts are essential in the society as they are supposed to bring equality to all people especially when they are making judgments. They are supposed to ensure that the rule of law and order is followed by all people in the country despite the political statuses and other backgrounds of the individuals. They should not be biased of allowing any kind of favor when performing important judgments. The way these judgments are conducted is very important and matters a lot to the society. This is because they determine the well-being of many people and provides a good environment where people survive without any form of disruption. The paper has tried to identify that despite the courts being expected to perform all the above duties, they are in many ways becoming biased. Different situations have been addressed.

With increased crimes and other unlawful activities in the United States, it is evident that the courts have been trying so hard to deal with these increased cases. Research has indicated that the decisions which are chosen by these courts to deal with the many cases have seen continued oppression of the minority groups of people in the country (Perry, 2016). The reason behind this is that people will see as if the courts are performing accordingly when they conduct such activities. People don’t understand that it has become a major concern as many of the judgments have been seen to strongly favor the large communities in the US while the minorities have been left in the dark. These courts have shown inequality from the handling of many cases which have been identified in the recent past. The increasing social problems in the US have been identified to increase day by day whereby the courts have chosen to deal with these problems where many minority groups are prosecuted. These articles have provided enough evidence from several cases which have been identified to be affected by biases from the major judgments of the court systems in the United States.

The literature review has been composed of several articles which have identified the recent cases of bias in the criminal courts of the US. The topic has analyzed all the evidence which has been presenting which will help in an understanding clearly of the limitations of the judicial system in the United States. This will help in identifying the minorities who are mainly affected by these court decisions. There are different themes which have emerged in relation to the bias in criminal courts and have been discussed below.

The civil rights of many individuals have been highly violated according to the research. The justice on trial from the civil rights publication has identified that the judiciary system in the United States has significantly changed accordingly in in the recent years (Quigley, 2010). The minority groups have found a place in the system which has improved the policy on the fair employment of all people in the country. Such developments have been however affected by many racial injustices in the same courts when handling several cases in the country. This has shown that the minority people are being affected by several judgments in the country’s courts are enforced in a manner that is seen to be massively biased (Wilson, 2014). These injustices have been seen to be a long-term challenge especially after the court system in the country had fought for many years in order to ensure equal justices and appropriateness when making rules in the country. The criminal justice system has been seen to stay away from the deals which were made during these years where unequal treatment has been identified to characterize every stage of their processes. Such disparities affect only the guilty and the minority people in the country which are an enough evidence which shows why there are many minority citizens being detained by the police in the country.

Increased racism has been evident in the criminal courts. Quigley has identified the fourteen examples of racism in the criminal justice in the most recent cases which have been against the will and rights of the people (Quigley, 2010). This has given all the cases where the judges were seen to be unfair to the minority groups when their cases were being handled. The information gathered here is very important as it shows the many pieces of evidence in which the research paper is trying to address. Taking into consideration of these cases, one is able to make judgments concerning the effectiveness of the judiciary system in the United States. They have been identified to be unlawful and the minority are treated with fewer concerns where their rights are seen to be highly violated each day (Wilson, 2014). Such treatments are seen to be unacceptable and really disturbing for such communities living in the United States. There is no fair trial for the minorities who are being arrested on several occasions in the country (Quigley, 2010). The information that has been provided is strong from the various evidence in which it has brought to light so that people understand the matter being discussed. The black Americans are greatly failed by the inherently biased legal system, this has shown that despite the many approaches that have been made to ensure justice in the courts of law, there are many barriers which are affecting the system in the United States (Bowcott, 2015). The laws which have been made are being violated and the black people have nowhere to turn to. There is strong provided evidence of the cases despite having black people serving as judges.

The world socialist web site provided evidence of the continuing racial biases in the United States’ criminal justice courts (Wilson, 2014). They have seen that a report from the coalition of civil rights has made sense of the increasing injustices which are being witnessed in these courts. The US police have also been seen to be the greatest causes of these injustices with the many arrests being made to the minority groups of people. They have been violating these people’s rights and being unfair when handling their cases. The study is strong in that it has provided the various citations from the constitution in which they have explained what the requirements of such law keepers are. A paradox of bias has examined the role the race play when it comes to the handling of criminal judgments in the US (Perry, 2016). Whereas there are many guidelines which have been evident of the equal treatment of the African American people, there is a growing concern of the unequal treatments for the blacks in the criminal justice systems. This has investigated the role of race when the system is used.

Hatred has increased in the criminal courts where only minority groups are being prosecuted (Quigley, 2010). The hate crime in America written by Shively has shown that the many cases being handled by the US courts are full of minimal evidence and based on discrimination of the small groups of people in the country. These cases have shown that with the continuing activities to make sure that the rights of people are safeguarded accordingly, there have been many cases whereby the small groups have been denied their say and some rights (Shively, 2007). There is evidence on a number of cases which have been evidence in different parts of the country.

Corruption is another theme which has been identified in the study. Corruption in our courts has shown that judicial corruption is increasingly becoming a major concern in the United States (Pahis, 2009). This shows that there have been many forms of bribery which have been witnessed in the law courts and have prevented major and important decisions from being made to effect. There is evidence that when minority groups take matters to the courts especially where the another member is from the large communities, the courts is more likely to close the case or end it with an unfair trial. The information gathered has compiled several pieces of evidence which are proof of many corrupt judicial leaders who are said to take part in the receiving of bribes which led to making of unfair judgments.

Use of unfair trials has been seen to be a huge problem in the judicial courts of the United States. The use of unfair trials whereby the people from specific regions are favored by the many judgments being made in the courts today (Jones, 2000). Those who are from specific parts or those of different color are being humiliated and denied their say in the trials. This has caused inequality when making these judgments and the minority groups continue to be oppressed each day. The cases are based on favors where judges receive various forms of rewards failure to which the accused will always find themselves on the wrong. Dictatorship has been found present in the cases and these judges often fear to make decisions appropriately due to the threats from those people in power (Pahis, 2009).

Gender bias is increasingly affecting judgments in the criminal courts. There is gender bias in the criminal courts especially when it comes to rape cases (Murphy, 2001). The constitution has provided a due process which should be followed when making appropriate judgments when handling these cases. The process has been violated in the recent past especially from the provision of the rape victims with personal legal presentations in the court of law. The gender bias has been witnessed from how judgments are provided in the many cases in the courts (Quigley, 2010). There is the lack of appropriate use of the guidelines which are meant to reduce gender bias in the country.

The study has shown that there is increasing violation of the minority rights in the criminal justice system of the United States. They have shown that many cases being held are judged unfairly with increased corruption and other racism activities in these courts. This has made it difficult for the minority groups to have a stable environment whereby they are always exposed to harassment from the police and other law institutions. There has been evidence of inequality in these courts based on gender and the minority groups are not given any chance to participate in them. It is the responsibility of the government to ensure that law and order are restored in the judiciary. They should also uphold the several fair treatment laws which have been made in the constitution.

Minority Rights in the Criminal Justice System of the United States. (2021, May 17). Retrieved from https://papersowl.com/examples/minority-rights-in-the-criminal-justice-system-of-the-united-states/

The Criminal Justice System in the United States

How the Criminal Justice System Discriminates