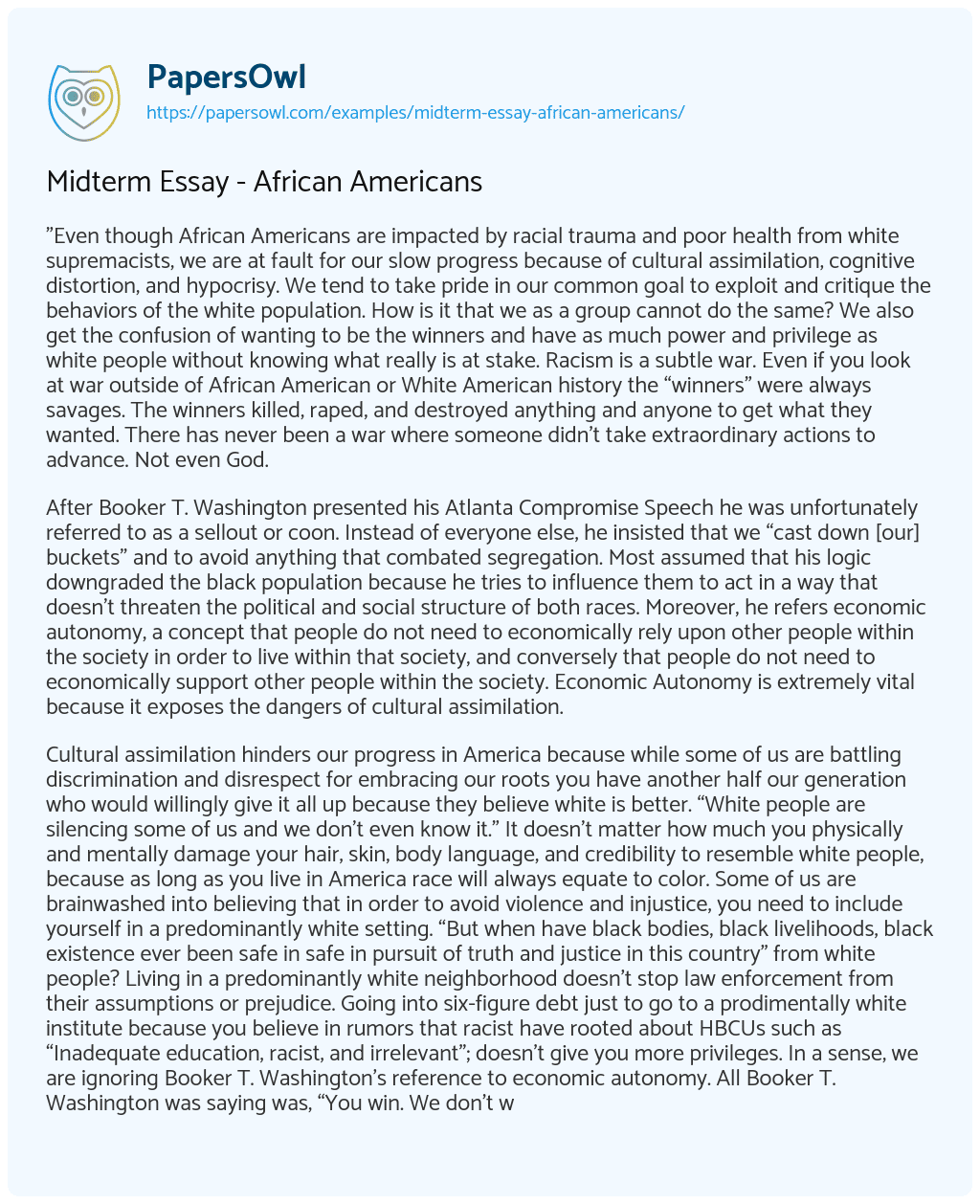 “Even though African Americans are impacted by racial trauma and poor health from white supremacists, we are at fault for our slow progress because of cultural assimilation, cognitive distortion, and hypocrisy. We tend to take pride in our common goal to exploit and critique the behaviors of the white population. How is it that we as a group cannot do the same? We also get the confusion of wanting to be the winners and have as much power and privilege as white people without knowing what really is at stake. Racism is a subtle war. Even if you look at war outside of African American or White American history the “winners” were always savages. The winners killed, raped, and destroyed anything and anyone to get what they wanted. There has never been a war where someone didn’t take extraordinary actions to advance. Not even God.

After Booker T. Washington presented his Atlanta Compromise Speech he was unfortunately referred to as a sellout or coon. Instead of everyone else, he insisted that we “cast down [our] buckets” and to avoid anything that combated segregation. Most assumed that his logic downgraded the black population because he tries to influence them to act in a way that doesn’t threaten the political and social structure of both races. Moreover, he refers economic autonomy, a concept that people do not need to economically rely upon other people within the society in order to live within that society, and conversely that people do not need to economically support other people within the society. Economic Autonomy is extremely vital because it exposes the dangers of cultural assimilation.

Cultural assimilation hinders our progress in America because while some of us are battling discrimination and disrespect for embracing our roots you have another half our generation who would willingly give it all up because they believe white is better. “White people are silencing some of us and we don’t even know it.” It doesn’t matter how much you physically and mentally damage your hair, skin, body language, and credibility to resemble white people, because as long as you live in America race will always equate to color. Some of us are brainwashed into believing that in order to avoid violence and injustice, you need to include yourself in a predominantly white setting. “But when have black bodies, black livelihoods, black existence ever been safe in safe in pursuit of truth and justice in this country” from white people? Living in a predominantly white neighborhood doesn’t stop law enforcement from their assumptions or prejudice. Going into six-figure debt just to go to a prodimentally white institute because you believe in rumors that racist have rooted about HBCUs such as “Inadequate education, racist, and irrelevant”; doesn’t give you more privileges. In a sense, we are ignoring Booker T. Washington’s reference to economic autonomy. All Booker T. Washington was saying was, “You win. We don’t want the right to vote. We just want to till our farms, better ourselves, and be left alone. Leave us in peace, and you’ll hear no more of this voting or integration business”.

In addition to cultural assimilation, cognitive distortions also prohibits us as a race to better. It is no lie that people have always believed in the myth of a “lazy nigga” but that doesn’t mean we need to feed into learned helplessness. We sometimes carry this mindset that when success is present, consequences, stress and struggle should be absent. We ignore every possibility such as sins and pure laziness to be a reason why we are struggling and only except the fact that being a minority is why we will always be the lower- middle class. Name one point in American history where no matter how many times African Americans have “proved our loyalty in the past, nursed the [white mans’] children, watched the sick-bed of their mothers and fathers, and often followed them with tear-dimmed eyes to their graves”, become lawyers, doctors , entrepreneurs, poets or activists and still didn’t have to put with racial and sexual trauma? For you to believe that even though you are blessed with civil rights, amendments, employment, education you can’t achieve something or prohibit yourself for committing a crime or sin because of your race.

Problem of Discrimination against African-Americans