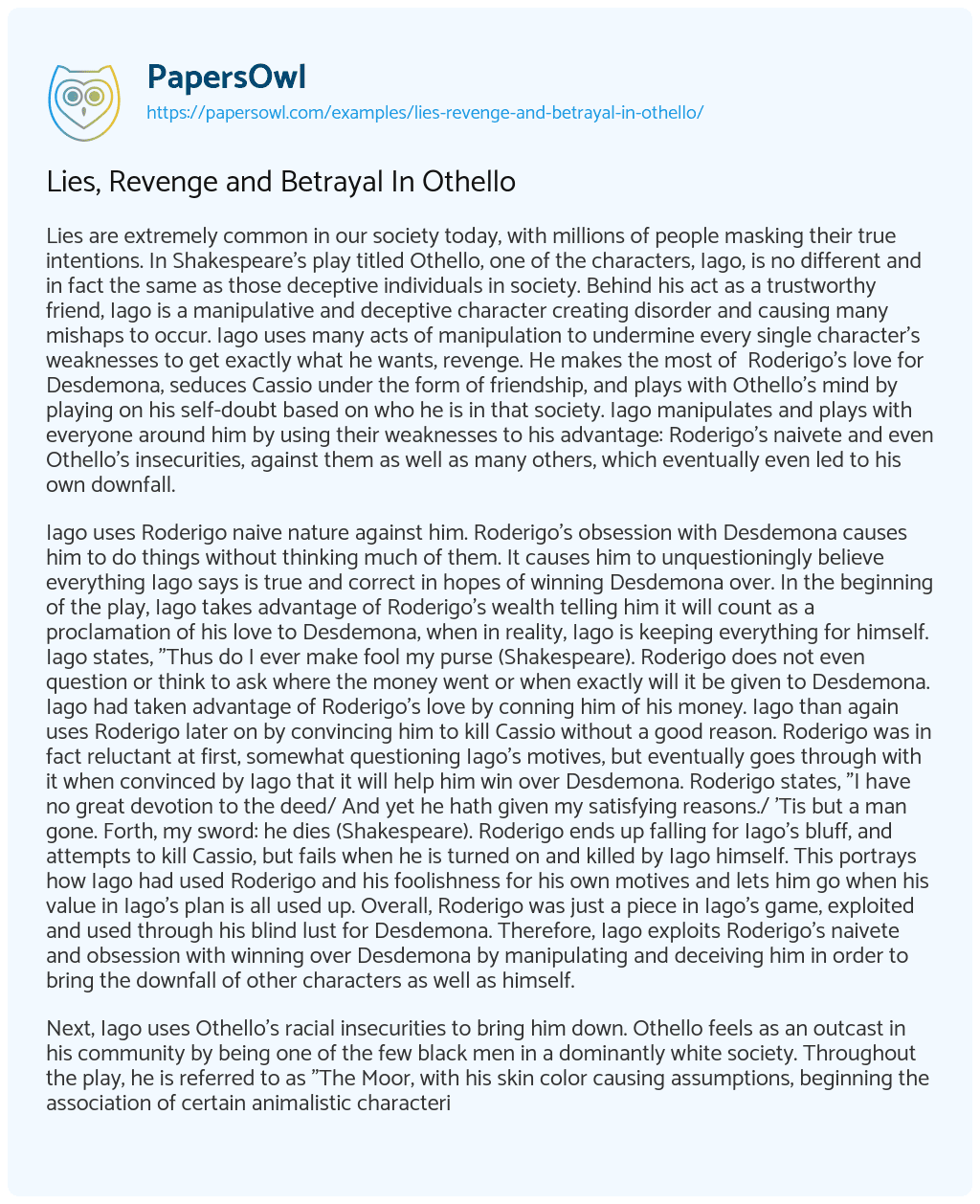 Lies are extremely common in our society today, with millions of people masking their true intentions. In Shakespeare’s play titled Othello, one of the characters, Iago, is no different and in fact the same as those deceptive individuals in society. Behind his act as a trustworthy friend, Iago is a manipulative and deceptive character creating disorder and causing many mishaps to occur. Iago uses many acts of manipulation to undermine every single character’s weaknesses to get exactly what he wants, revenge. He makes the most of  Roderigo’s love for Desdemona, seduces Cassio under the form of friendship, and plays with Othello’s mind by playing on his self-doubt based on who he is in that society. Iago manipulates and plays with everyone around him by using their weaknesses to his advantage: Roderigo’s naivete and even Othello’s insecurities, against them as well as many others, which eventually even led to his own downfall.

Iago uses Roderigo naive nature against him. Roderigo’s obsession with Desdemona causes him to do things without thinking much of them. It causes him to unquestioningly believe everything Iago says is true and correct in hopes of winning Desdemona over. In the beginning of the play, Iago takes advantage of Roderigo’s wealth telling him it will count as a proclamation of his love to Desdemona, when in reality, Iago is keeping everything for himself. Iago states, “Thus do I ever make fool my purse (Shakespeare). Roderigo does not even question or think to ask where the money went or when exactly will it be given to Desdemona. Iago had taken advantage of Roderigo’s love by conning him of his money. Iago than again uses Roderigo later on by convincing him to kill Cassio without a good reason. Roderigo was in fact reluctant at first, somewhat questioning Iago’s motives, but eventually goes through with it when convinced by Iago that it will help him win over Desdemona. Roderigo states, “I have no great devotion to the deed/ And yet he hath given my satisfying reasons./ ‘Tis but a man gone. Forth, my sword: he dies (Shakespeare). Roderigo ends up falling for Iago’s bluff, and attempts to kill Cassio, but fails when he is turned on and killed by Iago himself. This portrays how Iago had used Roderigo and his foolishness for his own motives and lets him go when his value in Iago’s plan is all used up. Overall, Roderigo was just a piece in Iago’s game, exploited and used through his blind lust for Desdemona. Therefore, Iago exploits Roderigo’s naivete and obsession with winning over Desdemona by manipulating and deceiving him in order to bring the downfall of other characters as well as himself.

Next, Iago uses Othello’s racial insecurities to bring him down. Othello feels as an outcast in his community by being one of the few black men in a dominantly white society. Throughout the play, he is referred to as “The Moor, with his skin color causing assumptions, beginning the association of certain animalistic characteristics. Even the time in which his relationship with Desdemona is, is “in a period when such a marriage would be rare and controversial (Baker and Womack). Society’s prejudice, as a result, diminished what was left of Othello’s self-esteem, allowing Iago to come take full advantage of his insecurities to fuel the feeling of jealousy inside of him. Iago first accomplishes this by hinting that Desdemona, Othello’s wife, has been unfaithful, because she prefers only people of her ‘type’, a type that Othello could never belong to. Iago states that, “As, to be bold with you,/Not to affect many proposed /Of her own clime, complexion, and degree,/Whereto we see in all things nature tends (Shakespeare). With that same logic, Desdemona would prefer Cassio over Othello, because he is just like her in age, race, and class, as opposed to Othello who is older, black, and considered unattractive (Baker and Womack). Similarly, Iago uses Desdemona’s gender and past to convince Othello of her infidelity. This causes the jealousy in him to rise. Since Desdemona betrayed her father, it is easy and more likely to betray Othello as well. Many women of that time period were known to be unfaithful towards their husbands. This knowledge pushed Othello into major jealousy and doubt. Iago messed with Othello’s mind to the point where he did not believe in what anyone was saying besides Iago. Iago used his tricks and lies to turn Othello against his own wife who in fact did nothing of the sort. Othello states, ” Oh, damn her, damn her!/ Come, go with me apart. I will withdraw/ To furnish me with some swift means of death/ For the fair devil. Now art thou my lieutenant (III.iii.) Othello makes a world of truth from all of Iago’s deceits and believes them all to be true, but he does not believe Desdemona’s sincere pleas to be all a complete fabrication. Iago completely takes advantage of Othello’s racial insecurity to put him in a false environment and “dehumanises the noble general, making him into a brute against his own wife (Baker and Womack). Iago throughout the play uses Othello’s racial insecurities and self-doubt to toy with his mind into believing that his wife, Desdemona, was being unfaithful and having an affair with Cassio.

As a matter of fact, everything that Iago had done throughout the play to get his revenge came back to him. He spun a web of lies that he eventually got trapped in at the end. Iago had asked his wife to get the handkerchief from Desdemona that was given to her by Othello. It was special in the family and considered sort of an heirloom that he wanted to pass down. While everyone was in a room after they had caught Iago, Othello mentioned something about the handkerchief. Iago’s wife came forth and said that Desdemona never gave anyone the handkerchief and in fact Iago had told her to get it for him from Desdemona. Everyone soon found out that Iago had set the entire thing up and Desdemona was truly innocent. He was the one who “gave the handkerchief to Cassio, then fed complete lies to Othello’s mind to turn him against his wife. Othello killed himself because he had already killed Desdemona, the one he truly and only loved, and couldn’t believe that he did not believe her and that he also had killed her. Cassio became next in charge and Iago was punished for what he did. Everything he had worked so hard on, had caught up with him in the end and actually caused his own downfall as well as numerous other characters, from Othello to Desdemona, Roderigo, and even his own wife.

Lies, Revenge and Betrayal In Othello. (2019, Jun 04). Retrieved from https://papersowl.com/examples/lies-revenge-and-betrayal-in-othello/