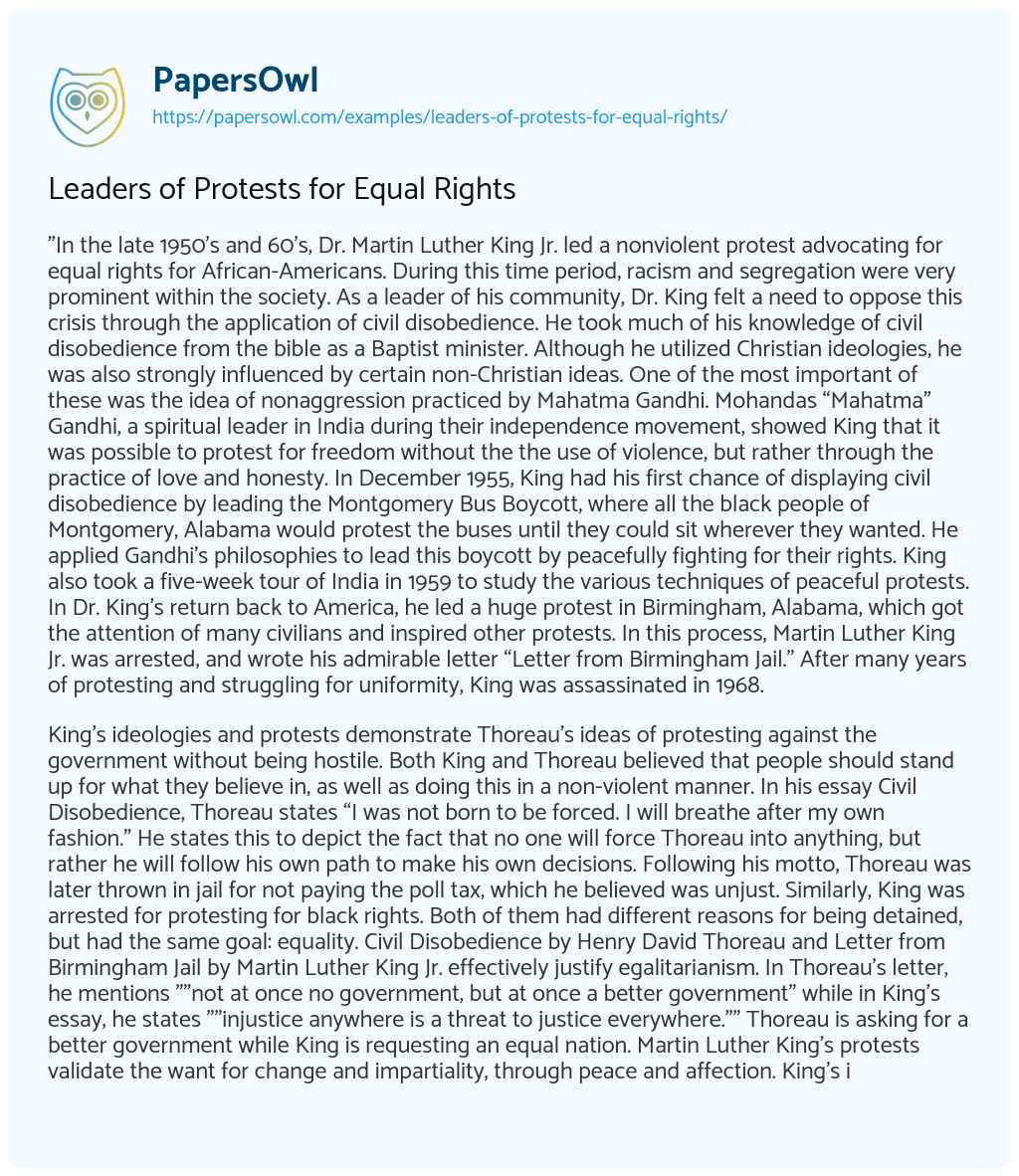 “In the late 1950’s and 60’s, Dr. Martin Luther King Jr. led a nonviolent protest advocating for equal rights for African-Americans. During this time period, racism and segregation were very prominent within the society. As a leader of his community, Dr. King felt a need to oppose this crisis through the application of civil disobedience. He took much of his knowledge of civil disobedience from the bible as a Baptist minister. Although he utilized Christian ideologies, he was also strongly influenced by certain non-Christian ideas. One of the most important of these was the idea of nonaggression practiced by Mahatma Gandhi. Mohandas “Mahatma” Gandhi, a spiritual leader in India during their independence movement, showed King that it was possible to protest for freedom without the the use of violence, but rather through the practice of love and honesty. In December 1955, King had his first chance of displaying civil disobedience by leading the Montgomery Bus Boycott, where all the black people of Montgomery, Alabama would protest the buses until they could sit wherever they wanted. He applied Gandhi’s philosophies to lead this boycott by peacefully fighting for their rights. King also took a five-week tour of India in 1959 to study the various techniques of peaceful protests. In Dr. King’s return back to America, he led a huge protest in Birmingham, Alabama, which got the attention of many civilians and inspired other protests. In this process, Martin Luther King Jr. was arrested, and wrote his admirable letter “Letter from Birmingham Jail.” After many years of protesting and struggling for uniformity, King was assassinated in 1968.

King’s ideologies and protests demonstrate Thoreau’s ideas of protesting against the government without being hostile. Both King and Thoreau believed that people should stand up for what they believe in, as well as doing this in a non-violent manner. In his essay Civil Disobedience, Thoreau states “I was not born to be forced. I will breathe after my own fashion.” He states this to depict the fact that no one will force Thoreau into anything, but rather he will follow his own path to make his own decisions. Following his motto, Thoreau was later thrown in jail for not paying the poll tax, which he believed was unjust. Similarly, King was arrested for protesting for black rights. Both of them had different reasons for being detained, but had the same goal: equality. Civil Disobedience by Henry David Thoreau and Letter from Birmingham Jail by Martin Luther King Jr. effectively justify egalitarianism. In Thoreau’s letter, he mentions “”not at once no government, but at once a better government” while in King’s essay, he states “”injustice anywhere is a threat to justice everywhere.”” Thoreau is asking for a better government while King is requesting an equal nation. Martin Luther King’s protests validate the want for change and impartiality, through peace and affection. King’s ideologies would be most likely to connect to those of Thoreau because of standing up for their beliefs and fighting for change.”

Leaders of Protests for Equal Rights. (2021, May 27). Retrieved from https://papersowl.com/examples/leaders-of-protests-for-equal-rights/

Gandhi Vs. Thoreau: Philosophies of Non-Violent Resistance and Protests