Lack of Parity in STEM Drives Women Away 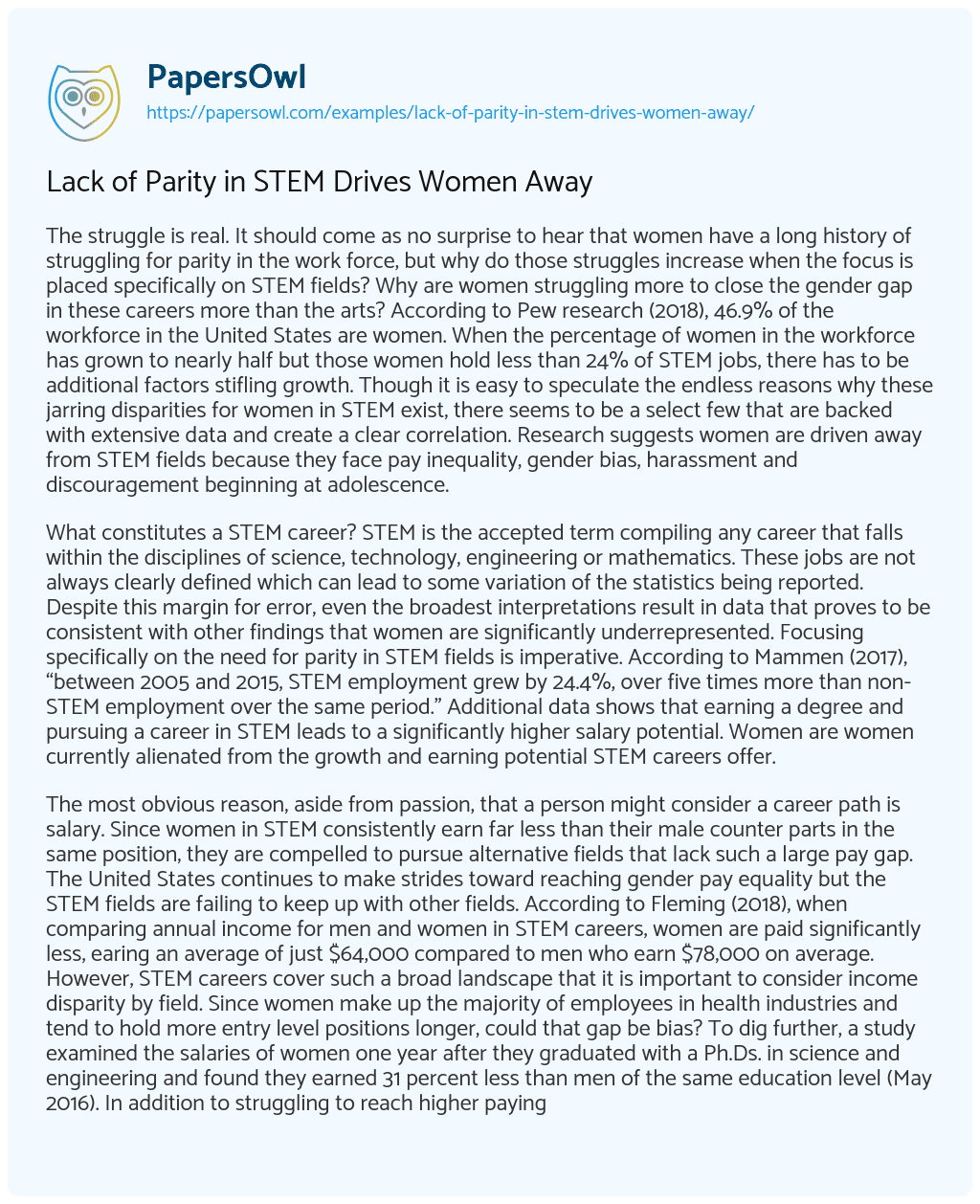 The struggle is real. It should come as no surprise to hear that women have a long history of struggling for parity in the work force, but why do those struggles increase when the focus is placed specifically on STEM fields? Why are women struggling more to close the gender gap in these careers more than the arts? According to Pew research (2018), 46.9% of the workforce in the United States are women. When the percentage of women in the workforce has grown to nearly half but those women hold less than 24% of STEM jobs, there has to be additional factors stifling growth. Though it is easy to speculate the endless reasons why these jarring disparities for women in STEM exist, there seems to be a select few that are backed with extensive data and create a clear correlation. Research suggests women are driven away from STEM fields because they face pay inequality, gender bias, harassment and discouragement beginning at adolescence.

What constitutes a STEM career? STEM is the accepted term compiling any career that falls within the disciplines of science, technology, engineering or mathematics. These jobs are not always clearly defined which can lead to some variation of the statistics being reported. Despite this margin for error, even the broadest interpretations result in data that proves to be consistent with other findings that women are significantly underrepresented. Focusing specifically on the need for parity in STEM fields is imperative. According to Mammen (2017), “between 2005 and 2015, STEM employment grew by 24.4%, over five times more than non-STEM employment over the same period.” Additional data shows that earning a degree and pursuing a career in STEM leads to a significantly higher salary potential. Women are women currently alienated from the growth and earning potential STEM careers offer.

The most obvious reason, aside from passion, that a person might consider a career path is salary. Since women in STEM consistently earn far less than their male counter parts in the same position, they are compelled to pursue alternative fields that lack such a large pay gap. The United States continues to make strides toward reaching gender pay equality but the STEM fields are failing to keep up with other fields. According to Fleming (2018), when comparing annual income for men and women in STEM careers, women are paid significantly less, earing an average of just $64,000 compared to men who earn $78,000 on average. However, STEM careers cover such a broad landscape that it is important to consider income disparity by field. Since women make up the majority of employees in health industries and tend to hold more entry level positions longer, could that gap be bias? To dig further, a study examined the salaries of women one year after they graduated with a Ph.Ds. in science and engineering and found they earned 31 percent less than men of the same education level (May 2016). In addition to struggling to reach higher paying jobs, once there, women in STEM careers make x for every dollar their male peers earn. When looking at the total workforce pay gap in the United States, women earned $.85 to the dollar in 2018, a difference of only 15 percent (Graf, Brown, & Patten 2019). STEM employers need to aggressively attempt to close this gap in order to attract the smartest and most qualified candidates into such fields.

Fiscal inequality is only one of the ways gender impacts STEM. Women face gender bias from peers, teachers and employers as well as when they apply for grants. A study found that women applying for grant funding faced a 4 percent bias when the applicants were evaluated rather than their proposed research. Qaiser (2019) explains that the reason this is an issue is that, “bias in grant review prevents the best research from being funded.”

“Women’s underrepresentation in STEM fields may also be a factor in the gender patenting gap. Although women have more than quadrupled their representation among patent holders since 1977, fewer than one in five of all patents had at least one women inventor in 2010.” IWPR.org

Discouragement- A possible explanation for the disproportionately low presence of women in STEM is a desire for a better work-family balance, as opposed to being pushed out (Willliams 2015). Even if stronger evidence for this existed, the discouragement girls face in STEM is a prime reason these careers lack such balance. To further disprove the notion a quick Google search returns dozens of articles dedicated to high paying work from home STEM jobs including biostatistician, contracted engineer, online math instructor and content writer. This theory attempts to put a bow on the issue but instead this assertion is so weak it only serves as an additional example of the innumerable way’s women are being discouraged from STEM. insurmountable evidence that indicates girls face discouragement from all directions. Beginning at youth, the false assertion that boys are better at math and science is instilled and, because teachers tend to perpetuate this myth, they tend to discourage young girls and possibly even limit opportunities for them to explore these areas further. Munoz-Boudet and Revenga (2017) point out, “even when girls do better than boys in math and science in grade 4 this difference tends to disappear by grade 8.” Even those who persevere will realize this was only the first of many hurdles as they will continue to endure the same discouragement as they age. In 1978, after being prohibited from taking STEM classes in public school, Eileen Pollack became one of only two women to ever graduate with a physics degree from Yale University. Despite graduating with honors, she did not pursue a career in physics maintaining the primary reason was her later experience with discouragement. Pollock (2013) states:

I didn’t go on in physics because not a single professor — not even the adviser who supervised my senior thesis — encouraged me to go to graduate school. Certain this meant I wasn’t talented enough to succeed in physics, I left the rough draft of my senior thesis outside my adviser’s door and slunk away in shame.

Over forty years later statistics show this is far from an isolated experience. Despite women accounting for 60 percent of all undergraduate degrees in the United States they account for only 35 percent of all STEM graduates (Munoz-Boudet & Revenga 2017).

Lack of Parity in STEM Drives Women Away. (2021, Apr 10). Retrieved from https://papersowl.com/examples/lack-of-parity-in-stem-drives-women-away/

The Need for more Women in STEM Fields

About Women in STEM Careers