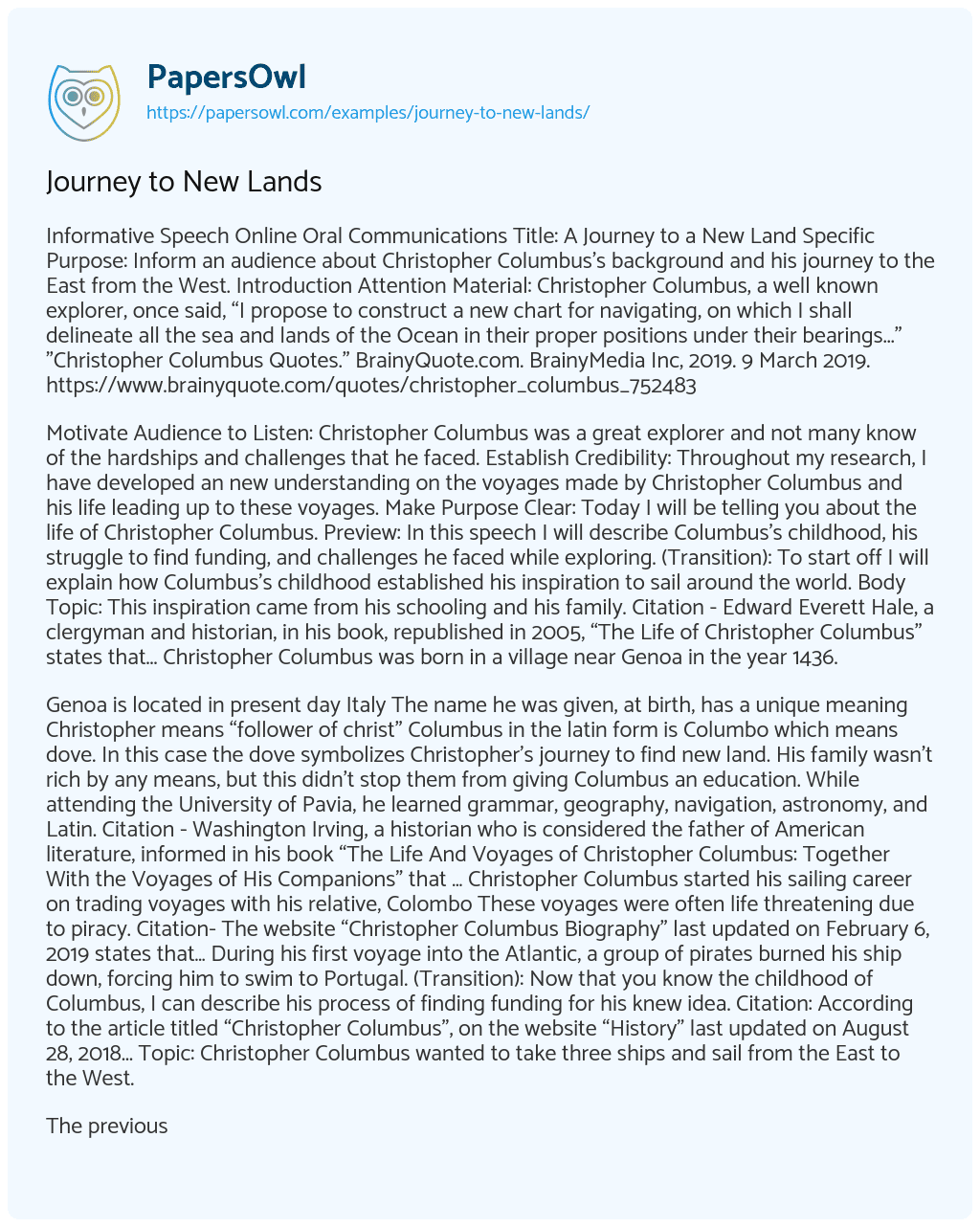 Informative Speech Online Oral Communications Title: A Journey to a New Land Specific Purpose: Inform an audience about Christopher Columbus’s background and his journey to the East from the West. Introduction Attention Material: Christopher Columbus, a well known explorer, once said, “I propose to construct a new chart for navigating, on which I shall delineate all the sea and lands of the Ocean in their proper positions under their bearings…” “Christopher Columbus Quotes.” BrainyQuote.com. BrainyMedia Inc, 2019. 9 March 2019. https://www.brainyquote.com/quotes/christopher_columbus_752483

Genoa is located in present day Italy The name he was given, at birth, has a unique meaning Christopher means “follower of christ” Columbus in the latin form is Columbo which means dove. In this case the dove symbolizes Christopher’s journey to find new land. His family wasn’t rich by any means, but this didn’t stop them from giving Columbus an education. While attending the University of Pavia, he learned grammar, geography, navigation, astronomy, and Latin. Citation – Washington Irving, a historian who is considered the father of American literature, informed in his book “The Life And Voyages of Christopher Columbus: Together With the Voyages of His Companions” that … Christopher Columbus started his sailing career on trading voyages with his relative, Colombo These voyages were often life threatening due to piracy. Citation- The website “Christopher Columbus Biography” last updated on February 6, 2019 states that… During his first voyage into the Atlantic, a group of pirates burned his ship down, forcing him to swim to Portugal. (Transition): Now that you know the childhood of Columbus, I can describe his process of finding funding for his knew idea. Citation: According to the article titled “Christopher Columbus”, on the website “History” last updated on August 28, 2018… Topic: Christopher Columbus wanted to take three ships and sail from the East to the West.

The previous way of getting to the West was going around Africa, however this path was to long and dangerous. Christopher was able to calculate the Earth’s circumference and found that he would be able to sail from Europe to Asia in a shorter amount of time. His calculations, however, were extremely off. Before he could take off to sea, he had to find someone willing fund his trip. He proposed his idea and calculations with Portugal and England, but was turned down, finally in the year 1491, the Spanish monarchs agreed to help because they wanted to spread christianity around the world. The Spanish gave him three ships. These ships included the Nina, Pinta, and Santa Maria. (Transtition): Now that you know how he received the means to explore, I can know describe his four voyages. Topic: His first voyage. In 1492, after setting sail from a port in Spain, he and his crew landed on an island and thought they had reached Asia. In reality, he discovered an island in the present day Bahamas. He then went to other Islands in Cuba and ended up in Hispaniola. While there, the Santa Maria was damaged and had to be left behind along with 39 men, so that the rest could sail back to Spain, believing that they had reached Asia. In the year 1493, Columbus went off on his second voyage. This time he explored the Caribbean and discovered that Hispaniola was destroyed and the men they left behind were killed. Columbus’s brothers stayed behind to help rebuild the settlement, while Columbus sailed farther thinking he had discovered islands off of China. On his third voyage, Columbus finally reached the mainland of South America landing in Venezuela.

While there he discovered that the settlement of Hispaniola had gotten worse. After pleading Columbus was able to convince the King that he could find more riches. In 1502 he went on his fourth voyage and explored the eastern coast of South America. This voyage like the others was unsuccessful. (Transtition): Now that I have explained the life of Christopher Columbus, let me review some of the key points. Conclusion Final Review Growing up his relatives and schooling were the inspiration for his love of sailing. He had support from the Spanish monarchs to pursue his explorations. While on the his voyages, he faced many challenges. Concluding Remarks While it is said that Christopher Columbus discovered the Americas, he actually only rediscovered it for Spain. His goal was to reach Asia from Europe, however, he never made it because of the rediscovery of the Americas, which he believed to be Asia. I hope you have learned more about Christopher Columbus and thank you for your time.

Journey to New Lands. (2021, May 24). Retrieved from https://papersowl.com/examples/journey-to-new-lands/