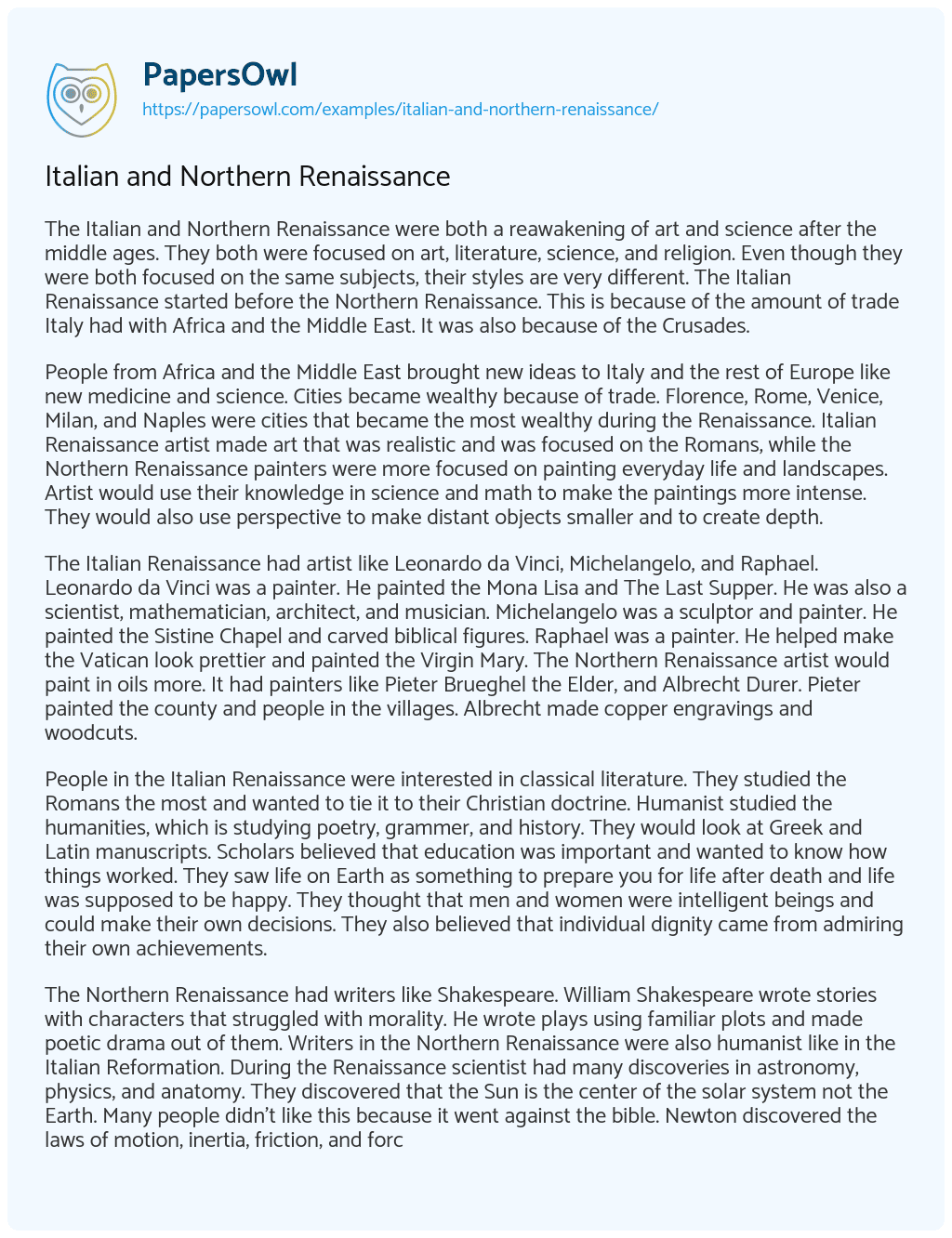 People from Africa and the Middle East brought new ideas to Italy and the rest of Europe like new medicine and science. Cities became wealthy because of trade. Florence, Rome, Venice, Milan, and Naples were cities that became the most wealthy during the Renaissance. Italian Renaissance artist made art that was realistic and was focused on the Romans, while the Northern Renaissance painters were more focused on painting everyday life and landscapes. Artist would use their knowledge in science and math to make the paintings more intense. They would also use perspective to make distant objects smaller and to create depth.

The Italian Renaissance had artist like Leonardo da Vinci, Michelangelo, and Raphael. Leonardo da Vinci was a painter. He painted the Mona Lisa and The Last Supper. He was also a scientist, mathematician, architect, and musician. Michelangelo was a sculptor and painter. He painted the Sistine Chapel and carved biblical figures. Raphael was a painter. He helped make the Vatican look prettier and painted the Virgin Mary. The Northern Renaissance artist would paint in oils more. It had painters like Pieter Brueghel the Elder, and Albrecht Durer. Pieter painted the county and people in the villages. Albrecht made copper engravings and woodcuts.

People in the Italian Renaissance were interested in classical literature. They studied the Romans the most and wanted to tie it to their Christian doctrine. Humanist studied the humanities, which is studying poetry, grammer, and history. They would look at Greek and Latin manuscripts. Scholars believed that education was important and wanted to know how things worked. They saw life on Earth as something to prepare you for life after death and life was supposed to be happy. They thought that men and women were intelligent beings and could make their own decisions. They also believed that individual dignity came from admiring their own achievements.

The Northern Renaissance had writers like Shakespeare. William Shakespeare wrote stories with characters that struggled with morality. He wrote plays using familiar plots and made poetic drama out of them. Writers in the Northern Renaissance were also humanist like in the Italian Reformation. During the Renaissance scientist had many discoveries in astronomy, physics, and anatomy. They discovered that the Sun is the center of the solar system not the Earth. Many people didn’t like this because it went against the bible. Newton discovered the laws of motion, inertia, friction, and force, and also discovered gravity. In anatomy they discovered the cell. They also discovered calculus in math.

Representation of Athleticism in Greek and Early Italian Renaissance Art