Isolation: Frankenstein and the Heart of Darkness 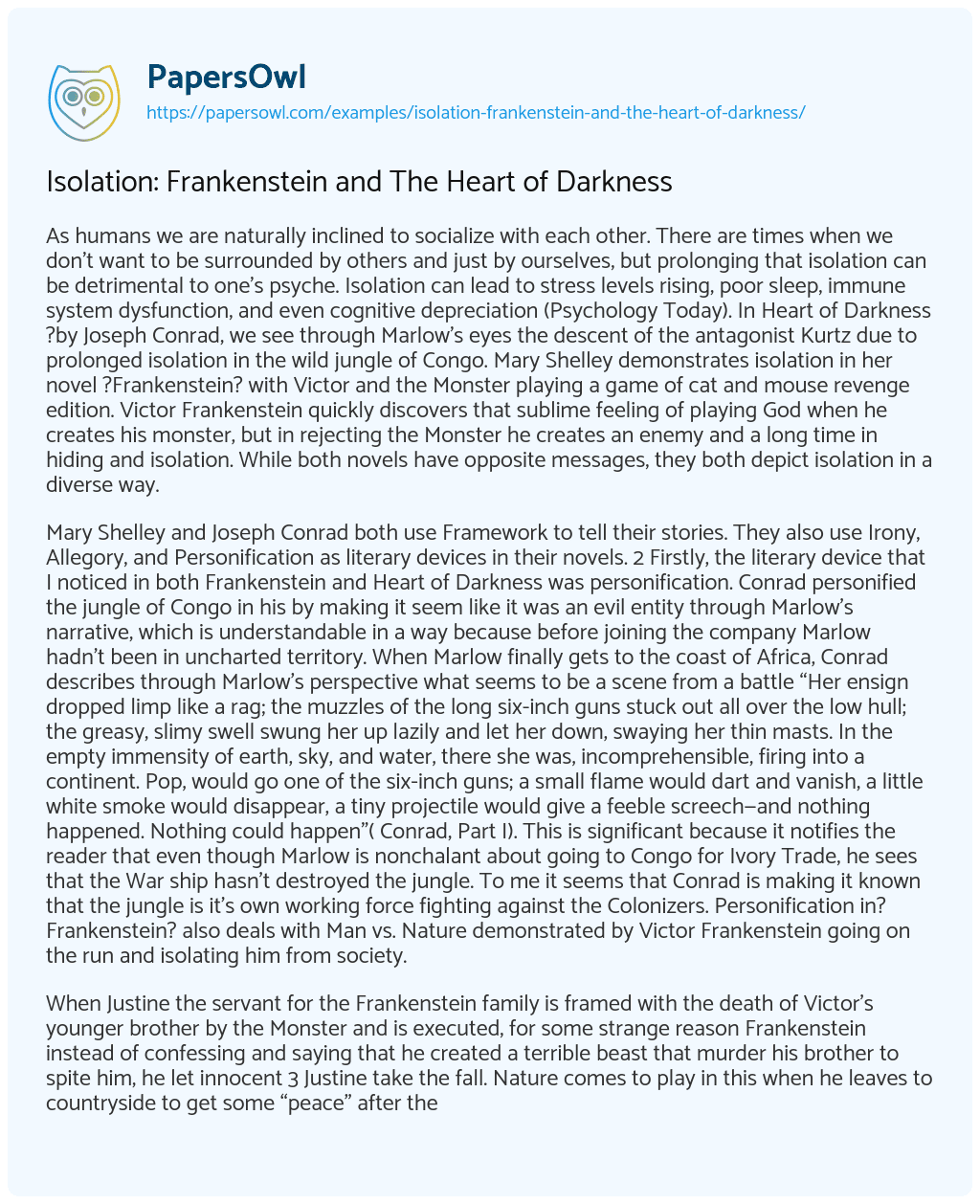 As humans we are naturally inclined to socialize with each other. There are times when we don’t want to be surrounded by others and just by ourselves, but prolonging that isolation can be detrimental to one’s psyche. Isolation can lead to stress levels rising, poor sleep, immune system dysfunction, and even cognitive depreciation (Psychology Today). In Heart of Darkness ?by Joseph Conrad, we see through Marlow’s eyes the descent of the antagonist Kurtz due to prolonged isolation in the wild jungle of Congo. Mary Shelley demonstrates isolation in her novel ?Frankenstein? with Victor and the Monster playing a game of cat and mouse revenge edition. Victor Frankenstein quickly discovers that sublime feeling of playing God when he creates his monster, but in rejecting the Monster he creates an enemy and a long time in hiding and isolation. While both novels have opposite messages, they both depict isolation in a diverse way.

Mary Shelley and Joseph Conrad both use Framework to tell their stories. They also use Irony, Allegory, and Personification as literary devices in their novels. 2 Firstly, the literary device that I noticed in both Frankenstein and Heart of Darkness was personification. Conrad personified the jungle of Congo in his by making it seem like it was an evil entity through Marlow’s narrative, which is understandable in a way because before joining the company Marlow hadn’t been in uncharted territory. When Marlow finally gets to the coast of Africa, Conrad describes through Marlow’s perspective what seems to be a scene from a battle “Her ensign dropped limp like a rag; the muzzles of the long six-inch guns stuck out all over the low hull; the greasy, slimy swell swung her up lazily and let her down, swaying her thin masts. In the empty immensity of earth, sky, and water, there she was, incomprehensible, firing into a continent. Pop, would go one of the six-inch guns; a small flame would dart and vanish, a little white smoke would disappear, a tiny projectile would give a feeble screech—and nothing happened. Nothing could happen”( Conrad, Part I). This is significant because it notifies the reader that even though Marlow is nonchalant about going to Congo for Ivory Trade, he sees that the War ship hasn’t destroyed the jungle. To me it seems that Conrad is making it known that the jungle is it’s own working force fighting against the Colonizers. Personification in? Frankenstein? also deals with Man vs. Nature demonstrated by Victor Frankenstein going on the run and isolating him from society.

When Justine the servant for the Frankenstein family is framed with the death of Victor’s younger brother by the Monster and is executed, for some strange reason Frankenstein instead of confessing and saying that he created a terrible beast that murder his brother to spite him, he let innocent 3 Justine take the fall. Nature comes to play in this when he leaves to countryside to get some “peace” after the execution of Justine, “?A tingling long-lost sense of pleasure often came across me during this journey. Some turn in the road, some new object suddenly perceived and recognised, reminded me of days gone by, and were associated with the lighthearted gaiety of boyhood. The very winds whispered in soothing accents, and maternal Nature bade me weep no more. Then again the kindly influence ceased to act—I found myself fettered again to grief and indulging in all the misery of reflection. Then I spurred on my animal, striving so to forget the world, my fears, and more than all, myself—or, in a more desperate fashion, I alighted and threw myself on the grass, weighed down by horror and despair.”( Shelley, Chapter 9). I believe Shelley wanted readers to imagine the solitude Victor put himself through.

I mean he was already paranoid about the monster coming after him and the ones he loved, thus driving him to isolate himself from the very thing that connected to him humanity. Secondly, Irony seems to play a special part in ?Frankenstein?. Shelley uses it to get the attention of the reader to look and examine the relationship of Victor Frankenstein and the Monster, you come to realize that it’s ironic that Victor’s thirst in knowledge is his downfall. In creating and neglecting his responsibilities towards the Monster, he subjugated himself to a life of isolation and regret. It’s ironic that he created something and in the end the creation killed him, by making him chase after him to end the torment and suffering. The irony in Heart of Darkness ?is Kurtz coming to the Congo in hopes to bring “light” and civilization to 4 a backwards society. He is a highly educated, refined gentleman; yet, in the end, the brutal nature of the Congo forces him to resort to the life of a murderer and pilferer.? ?It’s ironic because that false superiority and ignorant thinking is what drove Kurtz to realize in the end that he was the true Heart of Darkness, not the jungle or the uneducated natives. Lastly, the third and final literary device is Allegory and Mary Shelley alludes to the biblical book Genesis with the creation of Frankenstein’s Monster. It’s said that when Victor Frankenstein creates his Monster it’s like God creating Adam in the book of Genesis.

Victor Frankenstein was so caught up in being right about life reanimation that when he saw how ugly the monster was he couldn’t bring himself to look after him. Sharp mentions this in critical analysis, “On page 43, Victor describes ” How can I describe my emotions at this catastrophe, or how delineate the wretch whom with such infinite pains and care I had endeavored to form?”. This quote directly interprets to Victor’s feelings of dislike toward his creation and how he will eventually leave it and the creation will get that feeling of abandonment that is so present in this book especially when dealing with treatment toward the creation/pieces.” (Sharp,2001). I totally agree with her statement because it’s that abandonment that creates the resentment and isolation in the Monster and Victor himself. In Conclusion, I believe Shelley was trying to tell readers that every action we commit has good or bad consequences. I also believe that Victor had a God complex and he bite off more than he can chew. I would also say that Kurtz thought too highly of himsel?f that 5 he actually thought he could change how the natives controlled their lives. Conrad was smart to talk about Colonialism and the effects it had on people and you can truly see the greed of the company and Mr.Kurtz. Overall, I still believe isolation in both books caused the downfall of both Victor Frankenstein and Mr. Kurtz!

Isolation: Frankenstein and The Heart of Darkness. (2021, Apr 03). Retrieved from https://papersowl.com/examples/isolation-frankenstein-and-the-heart-of-darkness/