Integration of Preschools and Nursing Homes an Intervention for Loneliness 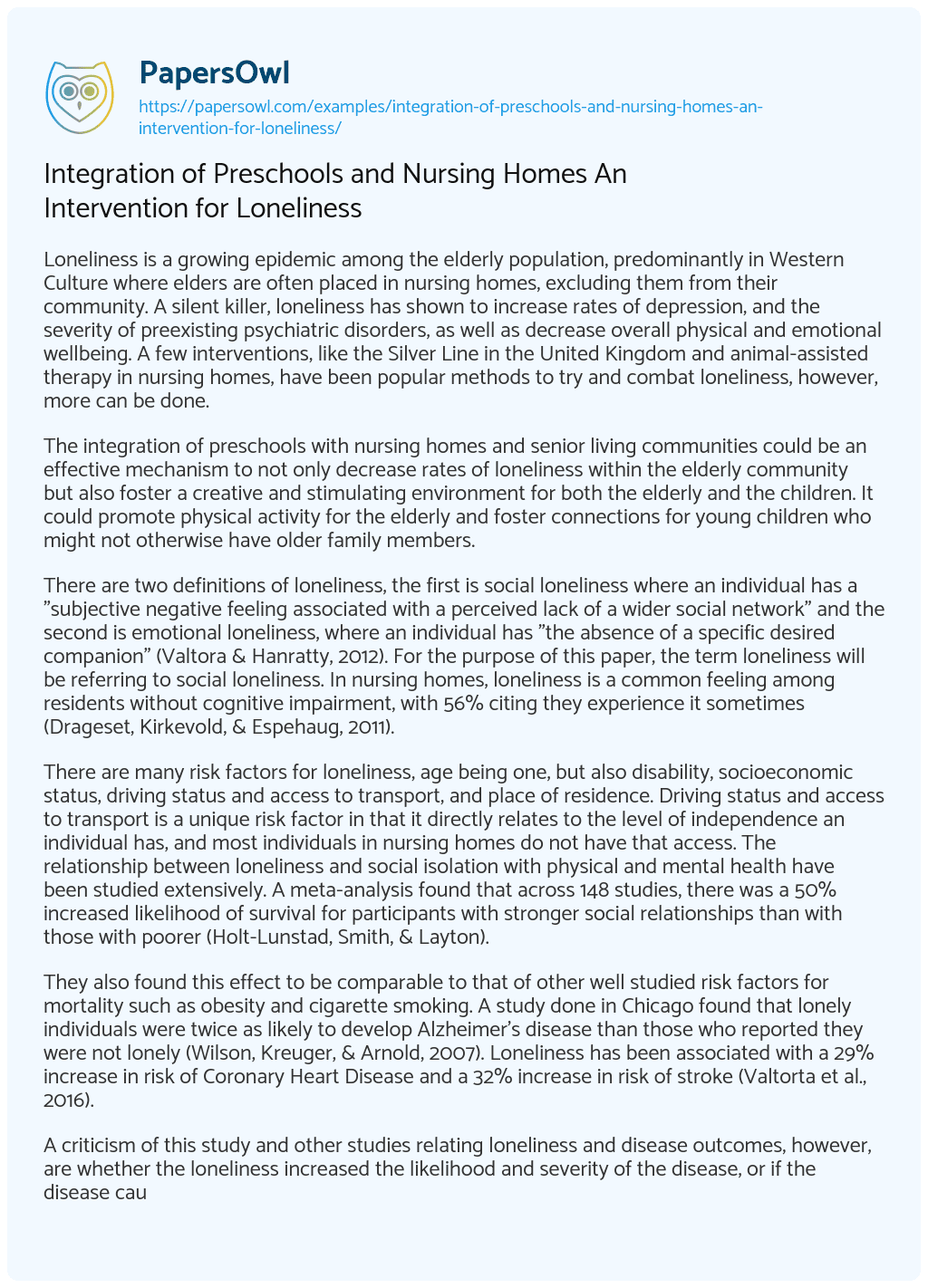 Loneliness is a growing epidemic among the elderly population, predominantly in Western Culture where elders are often placed in nursing homes, excluding them from their community. A silent killer, loneliness has shown to increase rates of depression, and the severity of preexisting psychiatric disorders, as well as decrease overall physical and emotional wellbeing. A few interventions, like the Silver Line in the United Kingdom and animal-assisted therapy in nursing homes, have been popular methods to try and combat loneliness, however, more can be done.

The integration of preschools with nursing homes and senior living communities could be an effective mechanism to not only decrease rates of loneliness within the elderly community but also foster a creative and stimulating environment for both the elderly and the children. It could promote physical activity for the elderly and foster connections for young children who might not otherwise have older family members.

There are two definitions of loneliness, the first is social loneliness where an individual has a “subjective negative feeling associated with a perceived lack of a wider social network” and the second is emotional loneliness, where an individual has “the absence of a specific desired companion” (Valtora & Hanratty, 2012). For the purpose of this paper, the term loneliness will be referring to social loneliness. In nursing homes, loneliness is a common feeling among residents without cognitive impairment, with 56% citing they experience it sometimes (Drageset, Kirkevold, & Espehaug, 2011).

There are many risk factors for loneliness, age being one, but also disability, socioeconomic status, driving status and access to transport, and place of residence. Driving status and access to transport is a unique risk factor in that it directly relates to the level of independence an individual has, and most individuals in nursing homes do not have that access. The relationship between loneliness and social isolation with physical and mental health have been studied extensively. A meta-analysis found that across 148 studies, there was a 50% increased likelihood of survival for participants with stronger social relationships than with those with poorer (Holt-Lunstad, Smith, & Layton).

They also found this effect to be comparable to that of other well studied risk factors for mortality such as obesity and cigarette smoking. A study done in Chicago found that lonely individuals were twice as likely to develop Alzheimer’s disease than those who reported they were not lonely (Wilson, Kreuger, & Arnold, 2007). Loneliness has been associated with a 29% increase in risk of Coronary Heart Disease and a 32% increase in risk of stroke (Valtorta et al., 2016).

A criticism of this study and other studies relating loneliness and disease outcomes, however, are whether the loneliness increased the likelihood and severity of the disease, or if the disease caused the loneliness because of lack of movement, or separation as a result of being hospitalized from the disease. This can be hard to measure in a scientific study. Loneliness is also a major risk factor for depression.

Depression is highly prevalent within nursing home communities, with one study finding 46.2% of elderly in nursing homes experience some form of depression (Jongenelis, et al., 2004). The perception of loneliness and social isolation is agreed upon to have long-term negative effects on an individual physically and mentally, however it is hard to recognize. Many nursing homes have introduced individual or group level interventions to try to combat the high prevalence of loneliness and depression within their communities.

Examples of group-level interventions are social gatherings, video conferences, and community activities, while individual-level interventions are one-on-one visiting, telephone support, and reading. The majority of these interventions, however, are reliant on the visiting of friends and family and therefore are neglecting a population of elderly who don’t have family that are willing or able to participate.

Two notable examples of group and individual level interventions are the Silver Line in the United Kingdom, and Animal-Assisted Therapy. The Silver Line is a free and confidential helpline for people over the age of 55 available 24/7 all year round. This helpline provides friendship, advice, and information for elderly who call in. They also have programs like Telephone Friends and Silver Letters where a volunteer is matched to an elderly person and either calls them or writes them a letter once a week or Silver Circles where a group of people with shared interests discuss topics over the phone.

This charity was created specifically to combat loneliness in the UK and the hotline has been running for 5 years. An evaluation of The Silver Line in 2015 found that while the hotline does a great job of accessibility of services to their targeted demographic, they argue that depending on the nature of a caller’s loneliness, a few calls a week might have a very limited impact. The evaluation recommended that the charity should focus more on directing to local services rather than the call itself ((Moore, Preston, Markkanen, & Parker, 2015). Animal-Assisted Therapy (AAT) has been a very popular intervention to combat loneliness, depression, and dementia in nursing homes for decades. The goal is to improve a patient’s social, emotional, or cognitive functioning (Phillips & McQuarrie, 2010).

AAT is with a trained animal and usually one-on-one therapy, versus Animal-Assisted Activities (AAA) which are group activities involving the animal, or entertainment animals who are not trained. However, the term AAT is used very loosely since it is a widely unregulated field. The effectiveness of AAT has been documented well in research and literature. Researchers have found that 30 minute AAT sessions just once a week improved loneliness scores significantly in nursing homes in 6 weeks. (Banks & Banks, 2002). One main criticism of AAT is that they are not goal oriented and are therefore hard to evaluate (Edwards & Beck, 2002). Also, with respects to loneliness, long-term AAT or AAA programs are not very common, leading to an individual to fall back into a state of loneliness after the program is finished.

This is not a long-term solution to help decrease loneliness, but rather a short-term exercise. An increasingly popular trend in Japan, Canada, and the United States is the integration of preschools in nursing homes. Intertwining these two groups could make significant positive changes in the mental and physical health of the elderly, as well as increase positive perceptions and relationships between the elderly and children. Little research has been done specifically on this intervention, however, it shows promise to be beneficial for both the children and the elderly who participate.

An example of this intervention in practice is the Intergenerational Learning Center (ILC) in Seattle, Washington which is a non-profit child care center and preschool on the grounds of a nursing home. Established in 1991, the ILC fosters intergenerational engagement between the older residents and children five days a week, all year round. Each day, the children visit with the residents for between 20 minutes and 60 minutes, dependent on the age of the child. Residents also have the opportunity to observe the classrooms and participate in structured activities with the children each day.

This constant engagement gives more opportunity to form meaningful connections, decrease social isolation, and also allows residents the freedom to spend as much or as little time with the children as possible. This connection between the children and the elderly can decrease the perception of loneliness long-term, especially with the engagement being a stable aspect of their daily living, a previous criticism of AAT.

The opportunities to participate in structured activities with the children can also improve physical health of the elderly. Young children are quite active, and engaging in activities with them can encourage the residents to participate and make different movements than they normally would. Greater involvement in positive social relationships and leisure activity is shown to increase physical health of older adults (Chang, Wray, & Lin, 2014).

Lastly, a study found that intergenerational programs with preschool children allow for smiling and conversation between the elder and child, which correspond to increased interpersonal acceptance and self-efficacy of the resident (Morita & Kobayashi, 2013). Giving meaningful roles to older adults remind them of their ability to contribute to society. On the other side of the relationship, young children have also shown to benefit from engagement with older adults.

Children who have more frequent contact with older adults are more likely to hold positive perceptions and positive stereotypes associated with them (Carstensen, Mason, & Caldwell, 1982) (See & Nicoladis, 2009). This could decrease the possibility of ageism in the future. In the context of the ILC program, the integration of children with the elderly could also lead to bonding, filling a familial connection in children who otherwise would not have this opportunity. Many of the parents whose children attend the ILC also attest that the children feel more comfortable around those with disabilities and impairments than their peers who lack this experience (Jansen, 2016).

Young children being surrounded by older role models have shown to positively affect their learning, development, and perception of the elderly. These effects have the potential to positively change their outlook permanently. Integrating preschools and nursing homes have the potential to decrease loneliness and social isolation within entire communities of older people which then can decrease the severity of other physical and mental conditions like Alzheimer’s, heart disease, and depression.

However, they also open up the possibilities to positively increase other aspects of a resident’s life. They foster social integration by allowing participation in activities, allowing smiling and conversation on a daily basis, and providing a constant and stable part of a resident’s life. Compared to previous interventions mentioned, integrated homes could be more beneficial in that they provide real activities and interaction every single day, versus the Silver Line, where talking once a week might not have that much long-term effect on loneliness.

They also are a year-round, stable and dependable program, unlike Animal-Assisted Therapies (AAT) and Animal-Assisted Activities (AAA) which can be sporadic and inconsistent in nature. They can also positively impact the children in the program as well, giving them opportunities to socialize and learn from a group they otherwise would not have associated with. It can change the mindset of children to look more positively towards the elderly population. This intervention could also feasibly save money by housing two businesses in one building and combining resources. The integration of preschools and nursing homes should be a common approach to improving the quality of life of the elderly population.

Integration of Preschools and Nursing Homes An Intervention for Loneliness. (2019, Nov 14). Retrieved from https://papersowl.com/examples/integration-of-preschools-and-nursing-homes-an-intervention-for-loneliness/

What is Cost of Loneliness

What is a Feeling of Loneliness