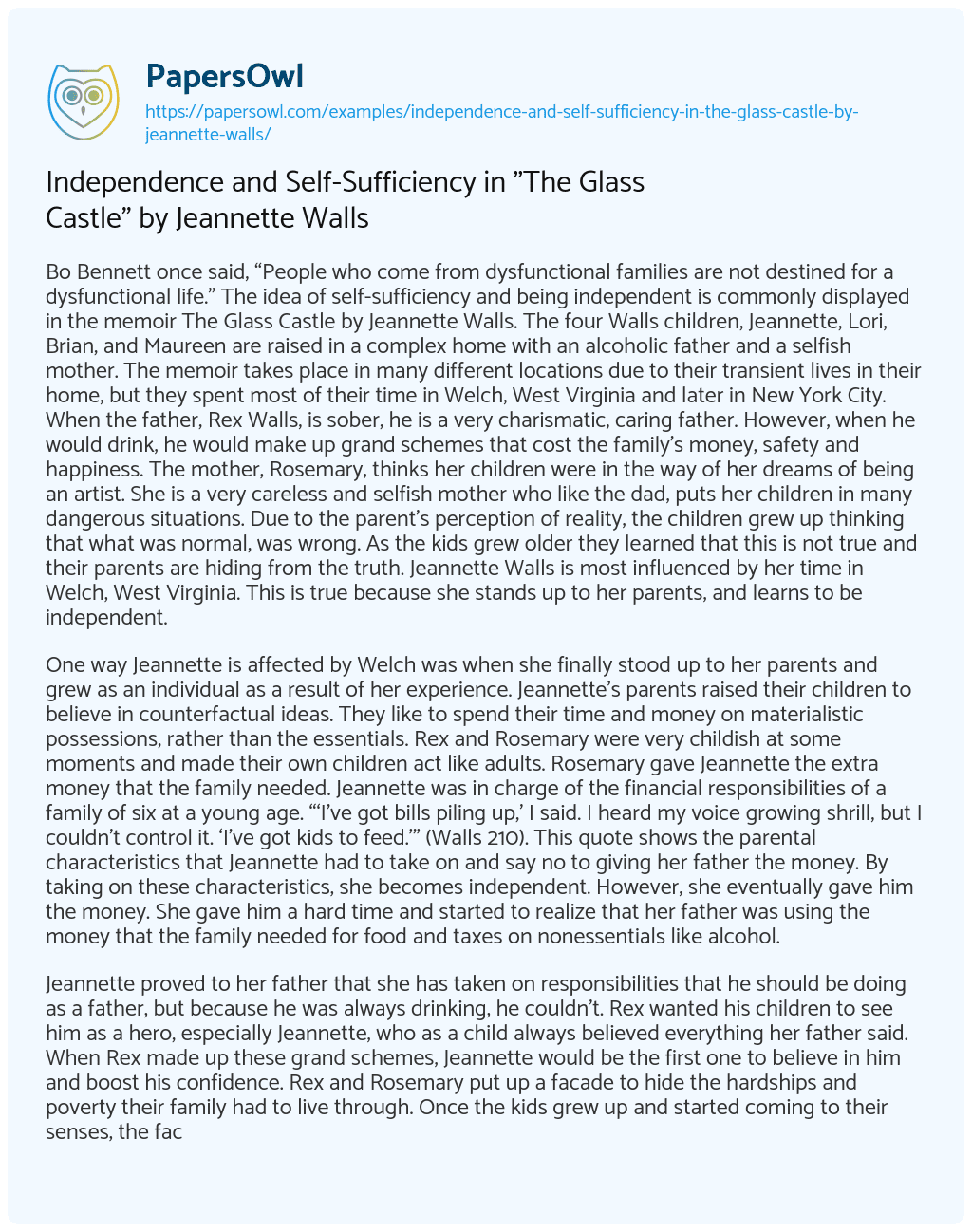 Bo Bennett once said, “People who come from dysfunctional families are not destined for a dysfunctional life.” The idea of self-sufficiency and being independent is commonly displayed in the memoir The Glass Castle by Jeannette Walls. The four Walls children, Jeannette, Lori, Brian, and Maureen are raised in a complex home with an alcoholic father and a selfish mother. The memoir takes place in many different locations due to their transient lives in their home, but they spent most of their time in Welch, West Virginia and later in New York City. When the father, Rex Walls, is sober, he is a very charismatic, caring father. However, when he would drink, he would make up grand schemes that cost the family’s money, safety and happiness. The mother, Rosemary, thinks her children were in the way of her dreams of being an artist. She is a very careless and selfish mother who like the dad, puts her children in many dangerous situations. Due to the parent’s perception of reality, the children grew up thinking that what was normal, was wrong. As the kids grew older they learned that this is not true and their parents are hiding from the truth. Jeannette Walls is most influenced by her time in Welch, West Virginia. This is true because she stands up to her parents, and learns to be independent.

One way Jeannette is affected by Welch was when she finally stood up to her parents and grew as an individual as a result of her experience. Jeannette’s parents raised their children to believe in counterfactual ideas. They like to spend their time and money on materialistic possessions, rather than the essentials. Rex and Rosemary were very childish at some moments and made their own children act like adults. Rosemary gave Jeannette the extra money that the family needed. Jeannette was in charge of the financial responsibilities of a family of six at a young age. “‘I’ve got bills piling up,’ I said. I heard my voice growing shrill, but I couldn’t control it. ‘I’ve got kids to feed.’” (Walls 210). This quote shows the parental characteristics that Jeannette had to take on and say no to giving her father the money. By taking on these characteristics, she becomes independent. However, she eventually gave him the money. She gave him a hard time and started to realize that her father was using the money that the family needed for food and taxes on nonessentials like alcohol.

Jeannette proved to her father that she has taken on responsibilities that he should be doing as a father, but because he was always drinking, he couldn’t. Rex wanted his children to see him as a hero, especially Jeannette, who as a child always believed everything her father said. When Rex made up these grand schemes, Jeannette would be the first one to believe in him and boost his confidence. Rex and Rosemary put up a facade to hide the hardships and poverty their family had to live through. Once the kids grew up and started coming to their senses, the facade started to fade and they got to see their true colors. The Glass Castle was a fantasy that represented the dream life that the Walls were always chasing. This kept the kids believing, even when times were tough. Jeannette realized that the Glass Castle was just her father’s fantasy and was not obtainable. “‘Dad,’ I said, ‘you’ll never build the Glass Castle.’ ‘Are you saying you don’t have faith in your old man?’ ‘Even if you do, I’ll be gone. In less than three months, I’m leaving for New York City.’” (Walls 238). This quote displays the loss of faith that Jeannette has for her dad. She finally admitted that she does not believe in the fantasies anymore. This is a prime example of Jeannette losing her innocence and the facade from her parents fading. Once the facade faded, the kids fully realized how they needed to run off to New York to escape the childish ideas presented from their parents.

Another way Jeannette was affected by her experience in Welch, was by learning to be independent and self-sufficient. Due to the lack of parental guidance from a young age, Jeannette learned many lessons as a young girl. These lessons were portrayed during her time in Welch. She had to do many mature tasks to take care of herself, her siblings, and her own parents. Jeannette’s parents were very financially unstable, so she started to babysit to get some money to spend for herself. She soon realized that she not only wanted braces, but she needed them. The Walls children have never been to any dentist, so Jeannette decides to make her own braces. The text states,” Mom and Dad had no money for braces, of course…I decided to make my own braces.” (Walls 201). Jeannette understands her family life and understands she is going to have to work for the things she wants by herself. This action shows her independence because she did her own research, and created them by herself. Since Jeannette’s parents were not feeding her appropriately, she had to scavenge for food wherever she could find it. She went through garbage cans countless times to provide for her and her siblings. The text states, ”When other girls came in and threw away their lunch bags in the garbage pails, I’d go retrieve them. I couldn’t get over the way kids tossed out all this perfectly good food…” (Walls 173). Jeannette does not like when other kids throw away their perfectly good food since she does not eat normally. Jeannette knows that she has to do whatever it takes to provide for her siblings. She cares about her siblings so much and would do anything for them. She’s selfless in this situation and this shows how she becomes more independent while in Welch.

Jeannette is influenced most by Welch, West Virginia. The ways in which she developed most were standing up to her parents and becoming more independent. She stands up to her parents when she took on the financial responsibilities, and the loss of faith Jeannette has in her dad. She became more independent when she dug through garbage at school to find food, and when she made her own braces. Jeannette Walls is affected most during her time in Welch, rather than any other locations.

Independence and Self-Sufficiency in "The Glass Castle" by Jeannette Walls. (2020, Apr 05). Retrieved from https://papersowl.com/examples/independence-and-self-sufficiency-in-the-glass-castle-by-jeannette-walls/

“The Glass Castle” by Jeannette Walls