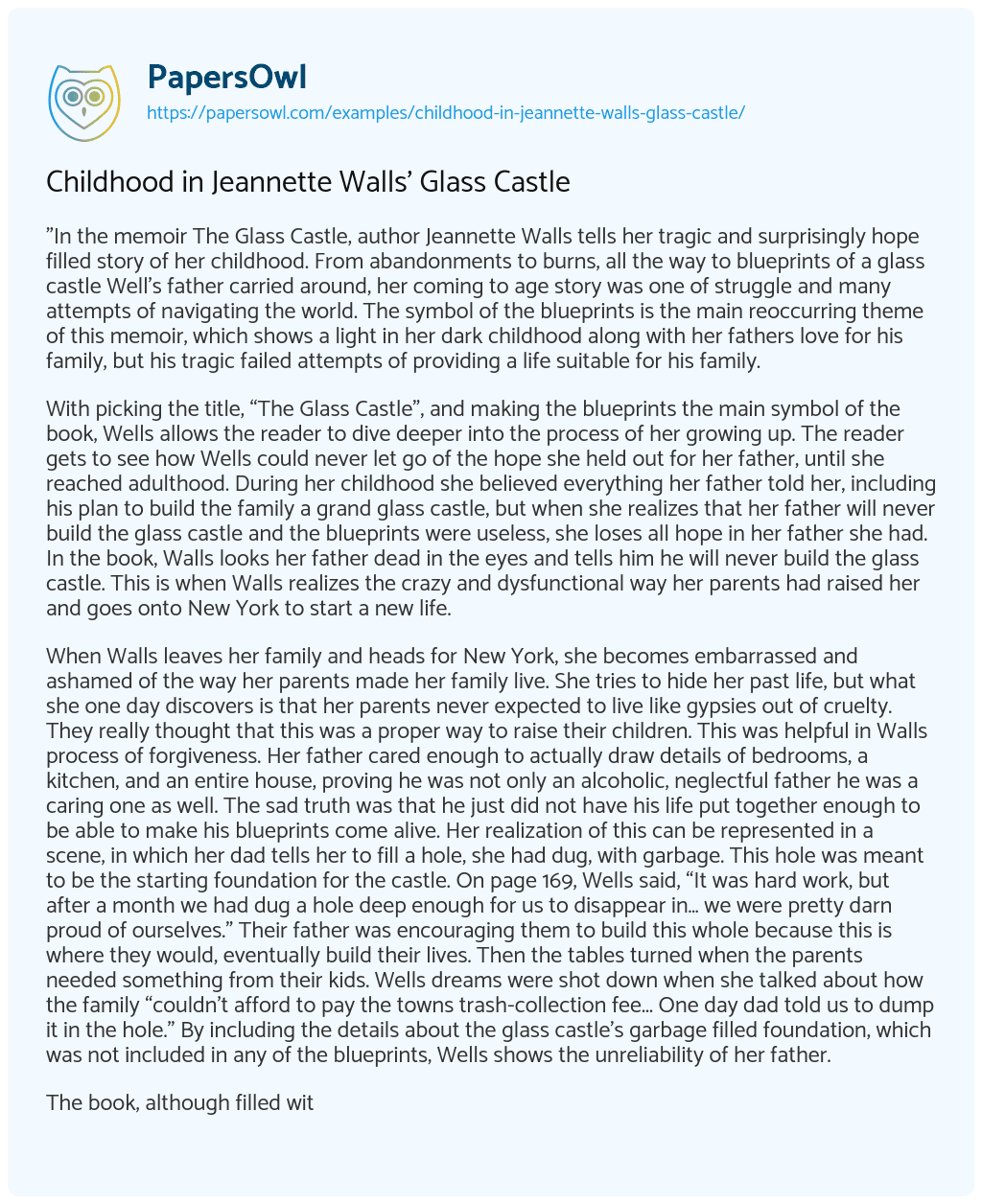 “In the memoir The Glass Castle, author Jeannette Walls tells her tragic and surprisingly hope filled story of her childhood. From abandonments to burns, all the way to blueprints of a glass castle Well’s father carried around, her coming to age story was one of struggle and many attempts of navigating the world. The symbol of the blueprints is the main reoccurring theme of this memoir, which shows a light in her dark childhood along with her fathers love for his family, but his tragic failed attempts of providing a life suitable for his family.

With picking the title, “The Glass Castle”, and making the blueprints the main symbol of the book, Wells allows the reader to dive deeper into the process of her growing up. The reader gets to see how Wells could never let go of the hope she held out for her father, until she reached adulthood. During her childhood she believed everything her father told her, including his plan to build the family a grand glass castle, but when she realizes that her father will never build the glass castle and the blueprints were useless, she loses all hope in her father she had. In the book, Walls looks her father dead in the eyes and tells him he will never build the glass castle. This is when Walls realizes the crazy and dysfunctional way her parents had raised her and goes onto New York to start a new life.

When Walls leaves her family and heads for New York, she becomes embarrassed and ashamed of the way her parents made her family live. She tries to hide her past life, but what she one day discovers is that her parents never expected to live like gypsies out of cruelty. They really thought that this was a proper way to raise their children. This was helpful in Walls process of forgiveness. Her father cared enough to actually draw details of bedrooms, a kitchen, and an entire house, proving he was not only an alcoholic, neglectful father he was a caring one as well. The sad truth was that he just did not have his life put together enough to be able to make his blueprints come alive. Her realization of this can be represented in a scene, in which her dad tells her to fill a hole, she had dug, with garbage. This hole was meant to be the starting foundation for the castle. On page 169, Wells said, “It was hard work, but after a month we had dug a hole deep enough for us to disappear in… we were pretty darn proud of ourselves.” Their father was encouraging them to build this whole because this is where they would, eventually build their lives. Then the tables turned when the parents needed something from their kids. Wells dreams were shot down when she talked about how the family “couldn’t afford to pay the towns trash-collection fee… One day dad told us to dump it in the hole.” By including the details about the glass castle’s garbage filled foundation, which was not included in any of the blueprints, Wells shows the unreliability of her father.

The book, although filled with the protagonist’s memories of abuse and neglect from her parents, is basically thanking them for the way they raised her. From an interview with Walls and Brie Larson, Jennette agreed with Larson when she said, “a loving family… who were doing the best they could give you.” Walls knows her parents were not the best, but that they were trying their hardest to raise their children with the limited resources and knowledge that they had. The blueprints that her father carried around is the most important key to the story of Jeannette Walls childhood. They represent the love her father had for his family, but also the crazy free-spirted ideals of her alcoholic dad. One of the main reasons Walls father drew these blueprints was to keep his family distracted of their hellish-like lives. This is prof that he cared for his family, even if it was a very strange way of showing it. He wanted his kids to have hope of a better life, but in the end he would never really do anything to change their economic or social state.

Another reason the blueprints are significant is the representation of the family dynamics. The castle reprints, for her parents, a place that they would obtain free of rules and restrictions. They already are nomads who gamble and participate in illegal activities, so this place represents the kind of life they are living currently and want to continue to live. Another way the castle physically mirrors the Walls family’s is the how the literal foundation of the castle looks. It is filled with trash. This represents that the structure of the Walls family is also filled with debris, crappy people, and memories that the whole family wishes to discard, which is all basically trash. Now, in the blueprints, the castle runs itself. It uses solar panels and requires no outside help in keeping it afloat. This is how Walls views herself, in her family. She raised herself and turned her life into something different from her parents’ lives. She made herself proud. Although she had the back story and help of an education from her parents, they did not contribute to her personal success. She is independent and does not require help from her family anymore. She in fact offers her mother and father help towards the beginning of the book after she finds out they are squatting in an abandoned warehouse. In conclusion, the way Walls was raised is not the way anyone wishes to be raised.”

Childhood in Jeannette Walls' Glass Castle. (2021, May 27). Retrieved from https://papersowl.com/examples/childhood-in-jeannette-walls-glass-castle/

“The Glass Castle” by Jeannette Walls