How to Achieve Social Justice 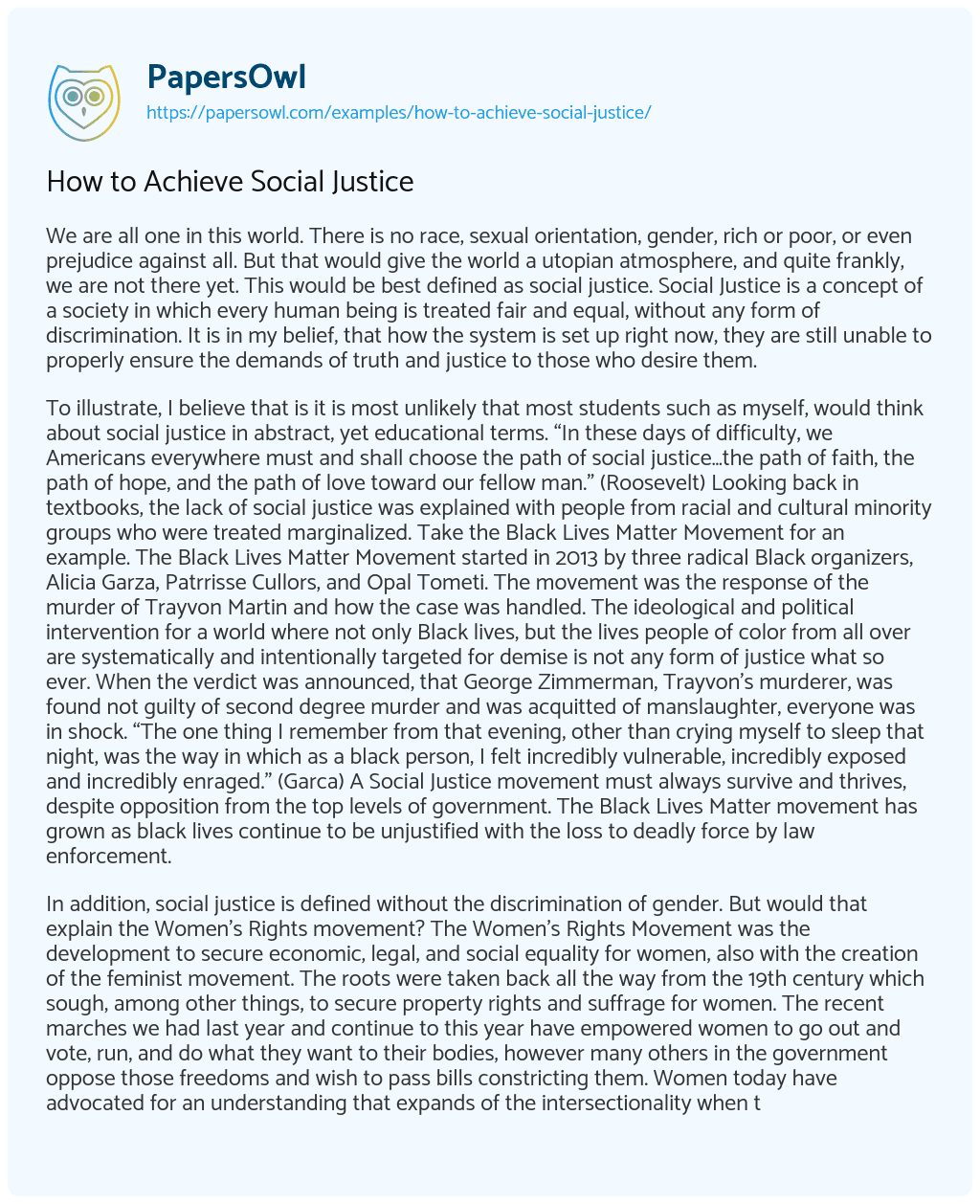 We are all one in this world. There is no race, sexual orientation, gender, rich or poor, or even prejudice against all. But that would give the world a utopian atmosphere, and quite frankly, we are not there yet. This would be best defined as social justice. Social Justice is a concept of a society in which every human being is treated fair and equal, without any form of discrimination. It is in my belief, that how the system is set up right now, they are still unable to properly ensure the demands of truth and justice to those who desire them.

To illustrate, I believe that is it is most unlikely that most students such as myself, would think about social justice in abstract, yet educational terms. “In these days of difficulty, we Americans everywhere must and shall choose the path of social justice…the path of faith, the path of hope, and the path of love toward our fellow man.” (Roosevelt) Looking back in textbooks, the lack of social justice was explained with people from racial and cultural minority groups who were treated marginalized. Take the Black Lives Matter Movement for an example. The Black Lives Matter Movement started in 2013 by three radical Black organizers, Alicia Garza, Patrrisse Cullors, and Opal Tometi. The movement was the response of the murder of Trayvon Martin and how the case was handled. The ideological and political intervention for a world where not only Black lives, but the lives people of color from all over are systematically and intentionally targeted for demise is not any form of justice what so ever. When the verdict was announced, that George Zimmerman, Trayvon’s murderer, was found not guilty of second degree murder and was acquitted of manslaughter, everyone was in shock. “The one thing I remember from that evening, other than crying myself to sleep that night, was the way in which as a black person, I felt incredibly vulnerable, incredibly exposed and incredibly enraged.” (Garca) A Social Justice movement must always survive and thrives, despite opposition from the top levels of government. The Black Lives Matter movement has grown as black lives continue to be unjustified with the loss to deadly force by law enforcement.

In addition, social justice is defined without the discrimination of gender. But would that explain the Women’s Rights movement? The Women’s Rights Movement was the development to secure economic, legal, and social equality for women, also with the creation of the feminist movement. The roots were taken back all the way from the 19th century which sough, among other things, to secure property rights and suffrage for women. The recent marches we had last year and continue to this year have empowered women to go out and vote, run, and do what they want to their bodies, however many others in the government oppose those freedoms and wish to pass bills constricting them. Women today have advocated for an understanding that expands of the intersectionality when they fight for social and political change. The Woman’s Rights movement is a declaration how they (the brave women) will protect and defend their rights, safety, and health among the different communities. They believed that gender equality is a shared vision of social justice, amongst human rights. Human rights are Woman rights and vice versa. To invest in statistical gender support with effective monitoring would make it easier for evidence driven decision making. The clash between customary law and constitutional law must be addressed and be as clear as possible to transform discriminatory gender stereotypes and social norms to run a smoother future.

Furthermore, there has been social justice within the LGBTQ community but it still has its flaws. The Gay Rights movement advocated for equal rights for men, lesbians, bisexuals and transsexuals, that wanted to freedom for their rights between consenting adults, and for the end of discrimination against gay men and lesbians in employment, lending, credit, public accommodations, housing, and other areas of life. With social activism on the rise, the majority who are up and going with the movement are usually gay men and lesbians. Erick Swank of Arizona State University had to say this, “Experiencing discrimination based on one’s sexual orientation can “undermine the credibility of other social institutions, and foster greater solidarity with other marginalized groups,” (Swank). Going back in history in 1984 and 85, when British coal minors went out of their way for the strike, gay people formed a solid alliance with one another and raised what was believed to be equivalent to $44,173 today in support of the strikers. Gay people also joined the Latino, black and feminist movement. New York times called the group to be “ferociously anti-union” but that never stopped them from protesting what they believed were their rights. The three main goals that the LGBTQ wanted to gain social justice, would be for increased safety for the LGBTQ community, the increased LGBTQ- affirming protections, and an increase inclusion and acceptance of LGBTQ people. One of the recent successes in the LGBTQ community was marriage equality, and among all those rights still needing to come into light, it took way too long for such a simple correct solution.

In conclusion, to really define social justice, you must always be able to address the injustices in equality while promoting rights, fairness, opportunity and acceptance towards everyone, including people from diverse and cultural backgrounds. With the injustices that the Black Lives Matter, The Women Rights, and the LGBTQ Community, it is clear to say that we have not failed yet to give everyone their freedom and justices who truly desire them.

How to Achieve Social Justice. (2021, Feb 20). Retrieved from https://papersowl.com/examples/how-to-achieve-social-justice/

Understanding of the Social Justice