Hispanics and the American Dream 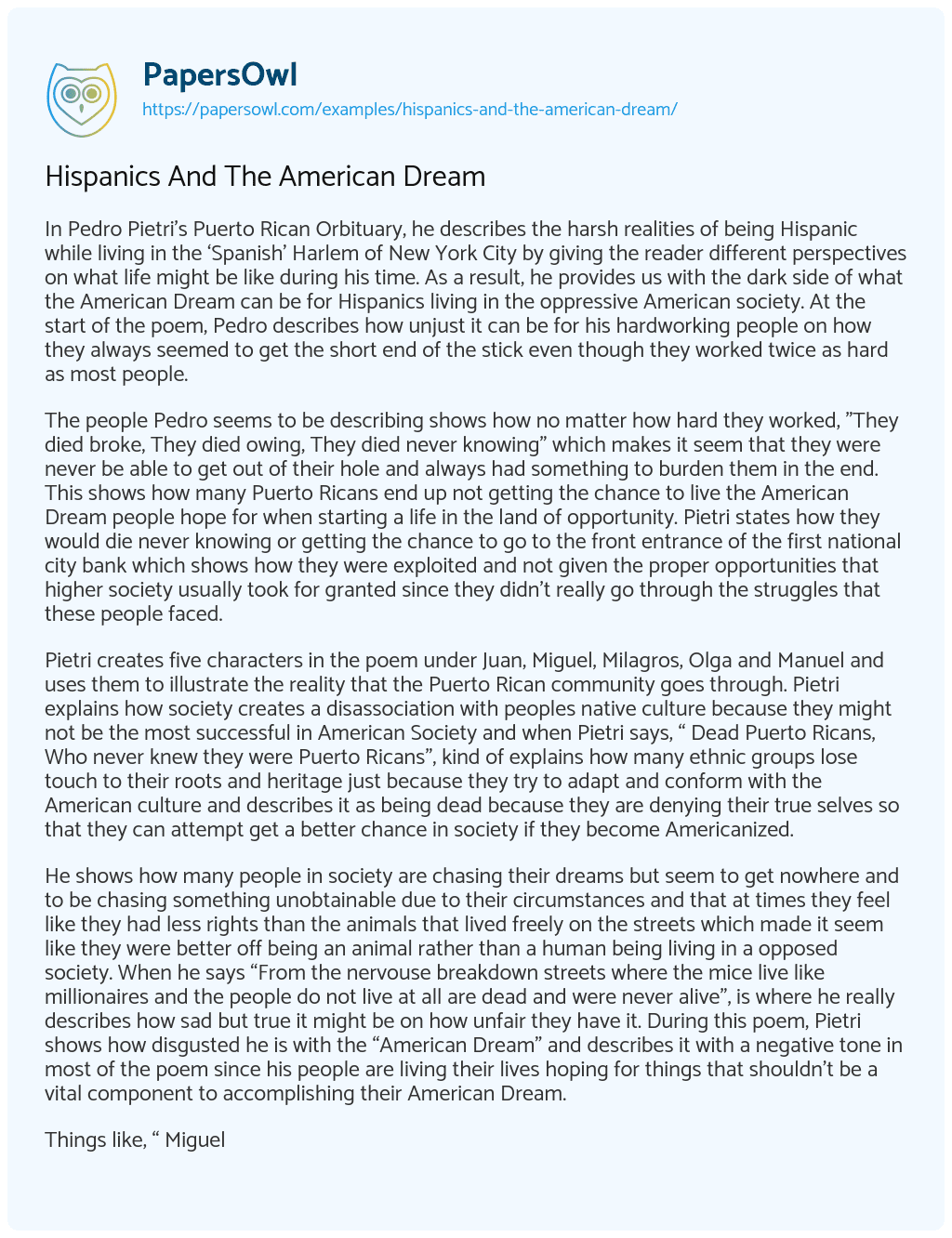 In Pedro Pietri’s Puerto Rican Orbituary, he describes the harsh realities of being Hispanic while living in the ‘Spanish’ Harlem of New York City by giving the reader different perspectives on what life might be like during his time. As a result, he provides us with the dark side of what the American Dream can be for Hispanics living in the oppressive American society. At the start of the poem, Pedro describes how unjust it can be for his hardworking people on how they always seemed to get the short end of the stick even though they worked twice as hard as most people.

The people Pedro seems to be describing shows how no matter how hard they worked, ”They died broke, They died owing, They died never knowing” which makes it seem that they were never be able to get out of their hole and always had something to burden them in the end. This shows how many Puerto Ricans end up not getting the chance to live the American Dream people hope for when starting a life in the land of opportunity. Pietri states how they would die never knowing or getting the chance to go to the front entrance of the first national city bank which shows how they were exploited and not given the proper opportunities that higher society usually took for granted since they didn’t really go through the struggles that these people faced.

Pietri creates five characters in the poem under Juan, Miguel, Milagros, Olga and Manuel and uses them to illustrate the reality that the Puerto Rican community goes through. Pietri explains how society creates a disassociation with peoples native culture because they might not be the most successful in American Society and when Pietri says, “ Dead Puerto Ricans, Who never knew they were Puerto Ricans”, kind of explains how many ethnic groups lose touch to their roots and heritage just because they try to adapt and conform with the American culture and describes it as being dead because they are denying their true selves so that they can attempt get a better chance in society if they become Americanized.

He shows how many people in society are chasing their dreams but seem to get nowhere and to be chasing something unobtainable due to their circumstances and that at times they feel like they had less rights than the animals that lived freely on the streets which made it seem like they were better off being an animal rather than a human being living in a opposed society. When he says “From the nervouse breakdown streets where the mice live like millionaires and the people do not live at all are dead and were never alive”, is where he really describes how sad but true it might be on how unfair they have it. During this poem, Pietri shows how disgusted he is with the “American Dream” and describes it with a negative tone in most of the poem since his people are living their lives hoping for things that shouldn’t be a vital component to accomplishing their American Dream.

Things like, “ Miguel died waiting for the welfare check, Milagros died waiting for her ten children to grow up and work so she could quit working, Olga died waiting for a five dollar raise” are all things that are the exact opposite of what people think of the American Dream but instead are actually dreaming of survival in this American Nightmare that they are put through. Their lives almost become meaningless because they are working so hard just to survive instead of being able to enjoy themselves and actually experience a comfortable lifestyle with things that they enjoy. something that people should be hoping for and thinks that they end up wasting their lives attempting to fulfill the American Dream

Hispanics And The American Dream. (2022, Apr 09). Retrieved from https://papersowl.com/examples/hispanics-and-the-american-dream/

Langston Hughes Vision of African American Culture in “I, Too” and “Dream Variations”