Hero’s Journey: Mulan Vs. the Odyssey 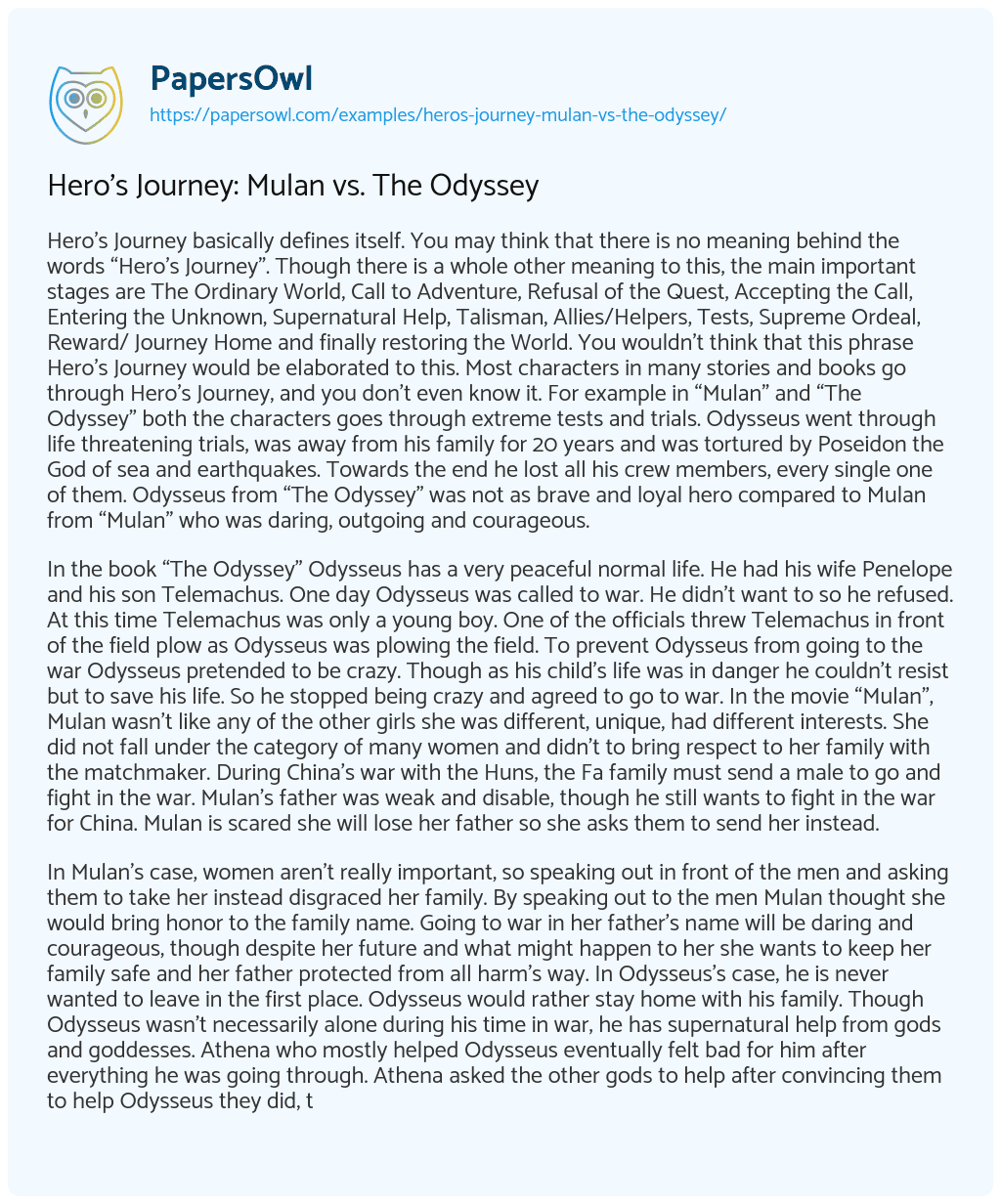 Hero’s Journey basically defines itself. You may think that there is no meaning behind the words “Hero’s Journey”. Though there is a whole other meaning to this, the main important stages are The Ordinary World, Call to Adventure, Refusal of the Quest, Accepting the Call, Entering the Unknown, Supernatural Help, Talisman, Allies/Helpers, Tests, Supreme Ordeal, Reward/ Journey Home and finally restoring the World. You wouldn’t think that this phrase Hero’s Journey would be elaborated to this. Most characters in many stories and books go through Hero’s Journey, and you don’t even know it. For example in “Mulan” and “The Odyssey” both the characters goes through extreme tests and trials. Odysseus went through life threatening trials, was away from his family for 20 years and was tortured by Poseidon the God of sea and earthquakes. Towards the end he lost all his crew members, every single one of them. Odysseus from “The Odyssey” was not as brave and loyal hero compared to Mulan from “Mulan” who was daring, outgoing and courageous.

In the book “The Odyssey” Odysseus has a very peaceful normal life. He had his wife Penelope and his son Telemachus. One day Odysseus was called to war. He didn’t want to so he refused. At this time Telemachus was only a young boy. One of the officials threw Telemachus in front of the field plow as Odysseus was plowing the field. To prevent Odysseus from going to the war Odysseus pretended to be crazy. Though as his child’s life was in danger he couldn’t resist but to save his life. So he stopped being crazy and agreed to go to war. In the movie “Mulan”, Mulan wasn’t like any of the other girls she was different, unique, had different interests. She did not fall under the category of many women and didn’t to bring respect to her family with the matchmaker. During China’s war with the Huns, the Fa family must send a male to go and fight in the war. Mulan’s father was weak and disable, though he still wants to fight in the war for China. Mulan is scared she will lose her father so she asks them to send her instead.

In Mulan’s case, women aren’t really important, so speaking out in front of the men and asking them to take her instead disgraced her family. By speaking out to the men Mulan thought she would bring honor to the family name. Going to war in her father’s name will be daring and courageous, though despite her future and what might happen to her she wants to keep her family safe and her father protected from all harm’s way. In Odysseus’s case, he is never wanted to leave in the first place. Odysseus would rather stay home with his family. Though Odysseus wasn’t necessarily alone during his time in war, he has supernatural help from gods and goddesses. Athena who mostly helped Odysseus eventually felt bad for him after everything he was going through. Athena asked the other gods to help after convincing them to help Odysseus they did, they did everything they could to get him to his freedom. Mulan also had supernatural help, Mulan is the only girl in the war and is at a very high risk at getting exposed and getting killed in effect. So Mulan prayed to her ancestors and the ancestors heard Mulan, and sends the Great Stone Dragon to guide and protect her.

Instead of the dragon, Mushu is Mulan’s new friend almost like her guru. Throughout, Mushu gives Mulan comic relief and keeps her sane. He is described as a little orange dragon with a funny personality. So now Mushu is Mulan’s protector and mentor throughout the movie. Overall Mulan had much less help proving she is the better hero. Switching over, Odysseus is tested many times to prove his skills in leading repeatedly. This is mostly proven in Circones, The Lotus eaters, The Lastrygonians, The Sirens, Scylla and The Cattle of the Sun God. Lastly as reward and Restoring the world, Mulan learns that she can and should be respected as herself a skilled and brave woman. The Emperor and all of China bow down to her. The emperor gives Mulan Shan Yu’s sword. Now she doesn’t have to hide from the world, she can be herself. Even though all of China bowed down to her, she is scared of her father’s reaction. Her father is not mad at her at all, only proud that she brought honor to the name and that she is safe and back with her family. Mulan doesn’t have to worry about matchmakers or pouring tea or wearing a pound full of makeup because she is skilled in other ways.

In “The Odyssey” when Odysseus finally gets home, this is the supreme ordeal. He gets warned that there are suitors in his house trying to marry his wife. All the suitors think that Odysseus is dead, but Penelope and Telemachus still have hope. Athena helps dress him as an old beggar who instead of takin things in his own way, he is calm and allows the gods for their help. Odysseus has one last test using his bow to know down all of the axe heads and no one else can do it other than Odysseys himself. He regained his wife and son and killed all the suitors leaving no one alive. Most characters in many stories and books go through Hero’s Journey and you don’t even know it. Odysseus from “The Odyssey” was not as brave and loyal hero compared to Mulan from “Mulan” who was daring, outgoing and courageous. Was Mulan more worthy of the Hero title or was Odysseus.

Hero’s Journey: Mulan vs. The Odyssey. (2019, Apr 20). Retrieved from https://papersowl.com/examples/heros-journey-mulan-vs-the-odyssey/