Hegemonic Masculinity and how it Encourages Rape 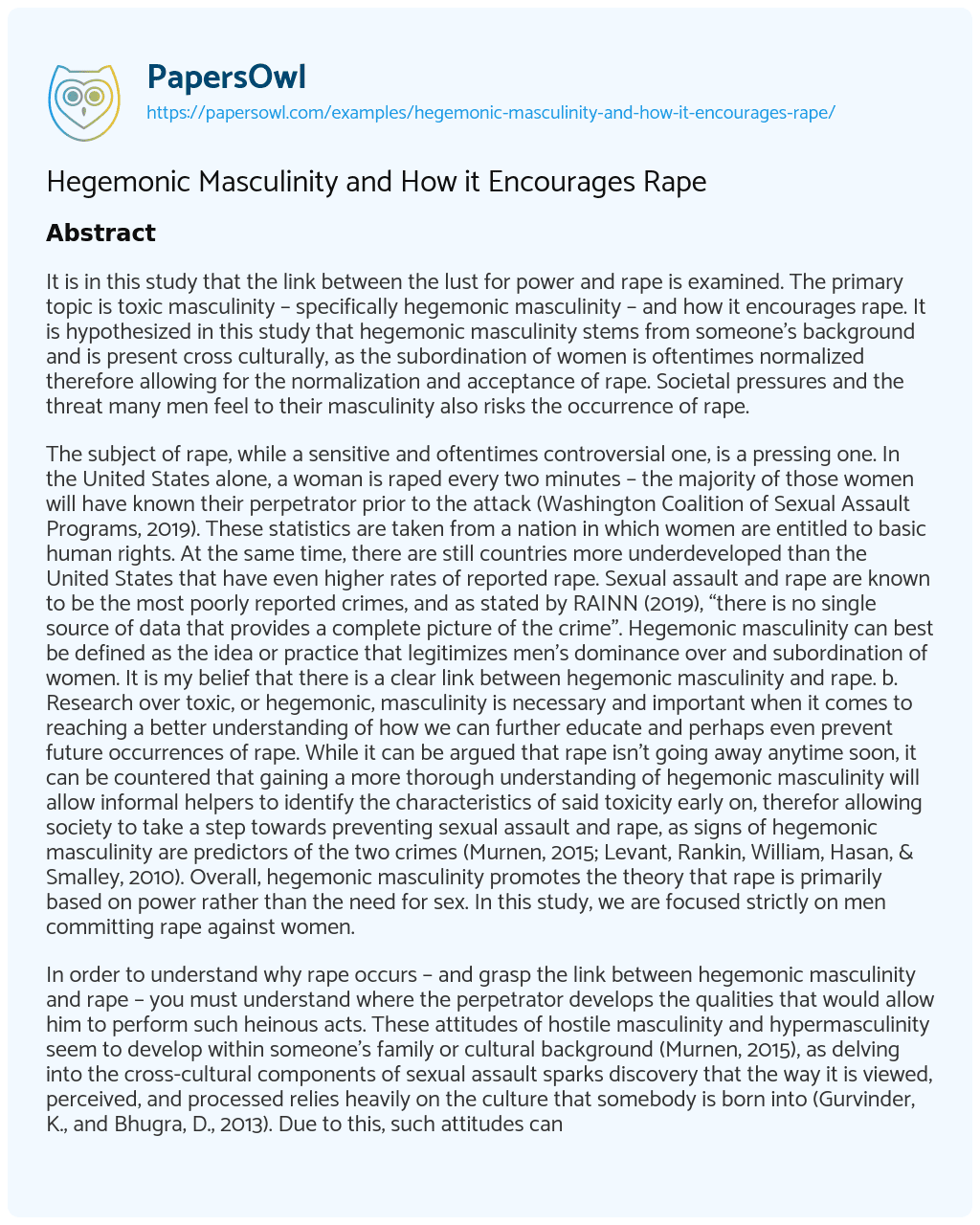 The subject of rape, while a sensitive and oftentimes controversial one, is a pressing one. In the United States alone, a woman is raped every two minutes – the majority of those women will have known their perpetrator prior to the attack (Washington Coalition of Sexual Assault Programs, 2019). These statistics are taken from a nation in which women are entitled to basic human rights. At the same time, there are still countries more underdeveloped than the United States that have even higher rates of reported rape. Sexual assault and rape are known to be the most poorly reported crimes, and as stated by RAINN (2019), “there is no single source of data that provides a complete picture of the crime”. Hegemonic masculinity can best be defined as the idea or practice that legitimizes men’s dominance over and subordination of women. It is my belief that there is a clear link between hegemonic masculinity and rape. b. Research over toxic, or hegemonic, masculinity is necessary and important when it comes to reaching a better understanding of how we can further educate and perhaps even prevent future occurrences of rape. While it can be argued that rape isn’t going away anytime soon, it can be countered that gaining a more thorough understanding of hegemonic masculinity will allow informal helpers to identify the characteristics of said toxicity early on, therefor allowing society to take a step towards preventing sexual assault and rape, as signs of hegemonic masculinity are predictors of the two crimes (Murnen, 2015; Levant, Rankin, William, Hasan, & Smalley, 2010). Overall, hegemonic masculinity promotes the theory that rape is primarily based on power rather than the need for sex. In this study, we are focused strictly on men committing rape against women.

In order to understand why rape occurs – and grasp the link between hegemonic masculinity and rape – you must understand where the perpetrator develops the qualities that would allow him to perform such heinous acts. These attitudes of hostile masculinity and hypermasculinity seem to develop within someone’s family or cultural background (Murnen, 2015), as delving into the cross-cultural components of sexual assault sparks discovery that the way it is viewed, perceived, and processed relies heavily on the culture that somebody is born into (Gurvinder, K., and Bhugra, D., 2013). Due to this, such attitudes can be extremely hard to eradicate. It can be theorized that the proximal and distal environment in which boys are raised plays a large role in whether or not a man becomes sexually aggressive (Lisak, 1991). Research shows that most college aged men are unaware of their sexual aggression, and while they may have even committed rapes themselves, yet they do not classify themselves as rapists (Lisak, 1991; (Nayak, N.B., Byrne, C.A., Martin, M.K., and Abraham, A.G., 2003). This supports the idea that sexual aggression in itself is a learned behavior, as the men do not see anything remotely wrong with how they have behaved nor do they see any flaws in how they view situations that could be categorized as rape, sexual assault, or degrading to women in general. It is also apparent, when delving into the work of others, that cultures and societies that have higher rates of sexist beliefs have higher rates of sexual aggression against women (Leone and Parrott, 2018).

The term “rape prone society” was coined by Peggy Sanday in 1981, and can best be defined by a society in which rates of reported rape are high, men punish women with rape or use it as a threat against women, or rape is a ceremonial act (Sanday, 1981). It stands to reason that a “rape prone” society is perhaps the best example of hegemonic masculinity, as the women are expected to conform to men and their needs, as they are more often than not viewed almost as property rather than individuals. Sanday gives an example of a “rape prone” society when discussing the Gusii of southwestern Kenya – where they do not distinguish between rape and “indecent assault”. The annual rate of Gusii rape was 47.2 per 100,000 population when Sanday conducted this study, whereas in urban areas of the United States was 13.85 per 100,000. It was stated in Sanday’s study that it is believed the rate of Gusii rape was drastically underestimated, as normal heterosexual intercourse in the Gusii culture is when a man overpowers the woman’s resistance and causes her pain – a groom is considered a “real man” if after his wedding night, his wife is unable to walk. Gusii sexuality is known to be quite hostile. Rape is not uncommon in the Gusii culture, and has become almost accepted. Due to the high rates of reported rape, as it staggers over the statistics of the United States, it supports the statement that someone’s culture can influence whether or not they will rape.

The statistics given in Sanday’s research are startling, yet a perfect example of hegemonic masculinity overruling a society. In addition to Sanday’s research, a study conducted in 2003 by Nayak and colleagues shows that nations with lower occurrence of violence reflect greater acceptance for gender equality and lack of community support for violence (Levinson, 1989). When questioned about sexual assault and spousal violence, college students from varying demographics answers were consistent with previous – women in men in each country differed from one another in their attitudes towards sexual assault, but women and men in Kuwait showed no difference in their responses (Nayak, N.B., Byrne, C.A., Martin, M.K., and Abraham, A.G., 2003). This is most likely due to their countries difference in beliefs and attitudes towards violence against women. To quote Samuel Veissiere, “Our expectations are heavily modulated by cultural norms. These are norms we all know and obey, often without knowing that we know them”.

In 2018, Leone and Parrott conducted a study in which male participants, all unique in race and demographics, were faced with potentially sexually aggressive situations. When male confederates around them began to make misogynistic or non-misogynistic remarks about a woman who had just entered and then exited the room, they were given an opportunity to perform bystander intervention. Male norms encourage intervention that may be chivalrous and heroic, but frown upon intervention that may inhibit another man’s “sexual conquest” (Carlson, 2008; Fabiano, Perkins, Berkowitz, Linkenbach, & Stark, 2003). In addition, it has been hypothesized that men degrade and oppress women to gain the respect of their peers. In the same study by Leone and Parrott, it was found that “individual differences related to men’s beliefs that men must attain social status and respect of others (i.e., endorsement of the status norm) and cognitive appraisals of what they find stressful or threatening (i.e., masculine gender role stress) only then play a role in intervention behavior”. In short, if men felt their social status was threatened, they were more likely to jump in in order to look like the hero. All of this has a direct link back to the occurrence of rape, or sexual aggression. For example, a man who has been rejected by a woman may feel as though the woman somehow owed him that date. The man, if the conditions in his background are right, may then stop at nothing to obtain that woman. Another example could relate back to the Gusii, when a man was not considered a “real man” until he had hindered his new bride unable to walk in their ceremonial rape of consummation. Men who hold traditional values about his role as a man are more likely to struggle when he feels as though his role has been challenged (Gallagher and Parrott, 2011), and participate in sexually aggressive actions to ward off the feeling of their masculinity being threatened. In fact, going back to cultural aspects once more, Gurvinder and Bhugra’s research (2013) shows that in some cultures where men are considered superior, a woman resisting sexual intercourse may stereotypically be viewed as a threat to their masculinity.

In the 1991 study conducted by David Lisak and Susan Roth, through the utilization of a questionnaire and a screening process, the pair of researchers were able to collect data from the male, college student participants which subsequently labeled most of them as rapists, after they described the force used in their sexual interactions. None of these participants labeled themselves as rapists, however. This is due to the normalization of characteristics relating to hegemonic masculinity. The objectification of women, denigration of women, and institutional oppression of women – all characteristics of hegemonic masculinity – is culture-wide and are all cultural norms that lead to rape (Lisak, 1991). It is the MRNI – Male Role Norms Inventory – that proposes that hegemonic masculinity can be identified by the avoidance of femininity, negativity towards sexual minorities, and the importance of sex and dominance (Levant, Rankin, William, Hasan, & Smalley, 2010). In the 2005 study conducted by Locke and Mahalik, it was concluded that the participants (college men) displayed characteristics of hegemonic masculinity, most specifically those that linked to sexual aggression were that of power over women, interpersonal power. (Lock and Mahalik, 2005; Murnen 2015). Another facet of how

Rape is a crime geared more towards the need for dominance and the subordination of women rather than just sex, just as robbery is a crime geared towards obtaining money rather than just the need to steal. Hegemonic masculinity, the idea of toxic masculinity that endorses the degradation and subordination of women. One could argue that this is not an issue for to expend resources on in the United States. That point can immediately be refuted with the statistics, as one in five women will survive rape or attempted rape. Rape is a crime – just like any other, and there should be active efforts in order to prevent rape. Rather than viewing rape as inevitable, gaining a better understanding of the underlying causes will allow us to predict and, perhaps, prevent future rapes.

Hegemonic Masculinity and How it Encourages Rape. (2020, Jul 04). Retrieved from https://papersowl.com/examples/hegemonic-masculinity-and-how-it-encourages-rape/

Trauma of Rape of Men and Women