Hate Speech and its Effects on Individuals of Society 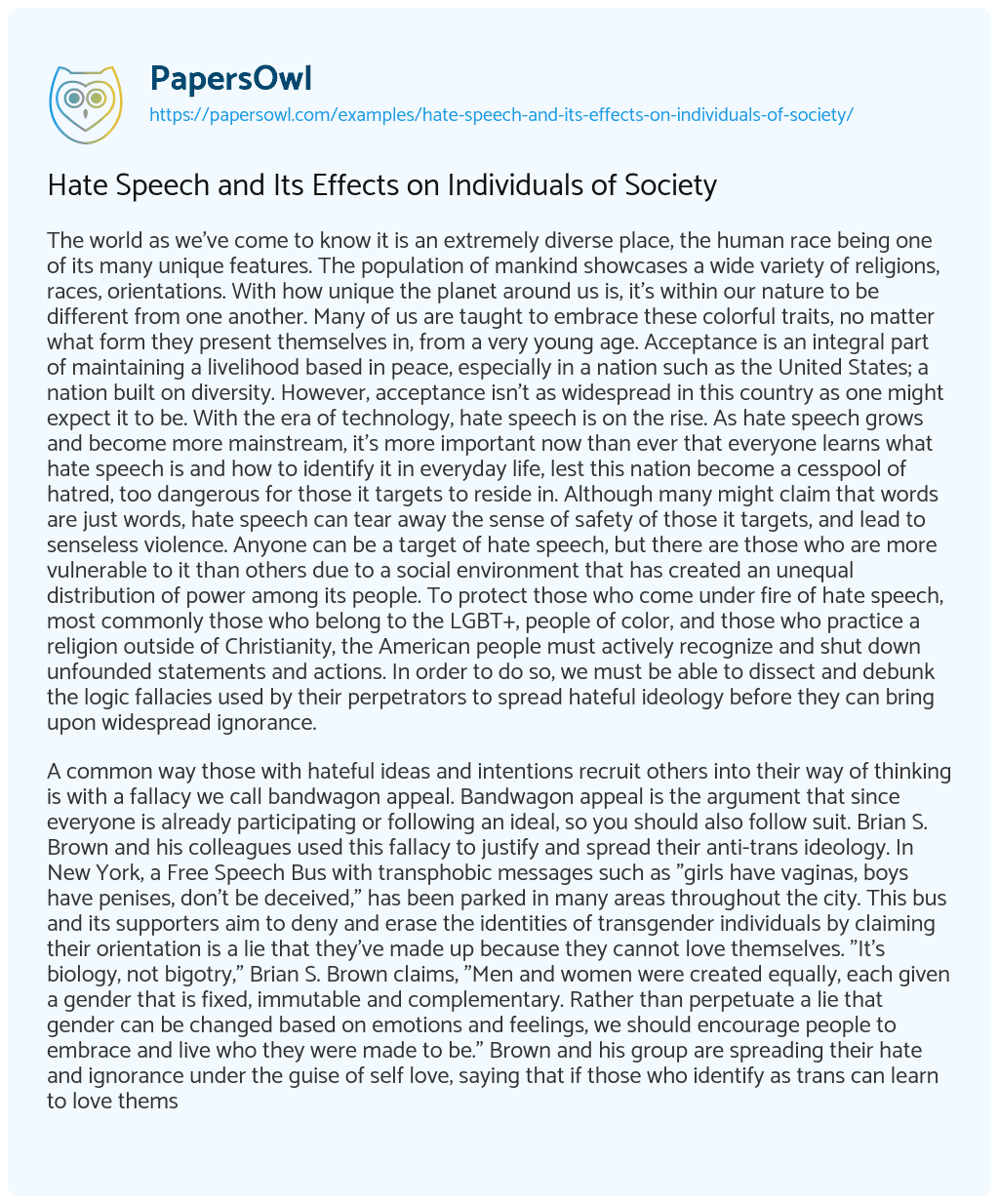 The world as we’ve come to know it is an extremely diverse place, the human race being one of its many unique features. The population of mankind showcases a wide variety of religions, races, orientations. With how unique the planet around us is, it’s within our nature to be different from one another. Many of us are taught to embrace these colorful traits, no matter what form they present themselves in, from a very young age. Acceptance is an integral part of maintaining a livelihood based in peace, especially in a nation such as the United States; a nation built on diversity. However, acceptance isn’t as widespread in this country as one might expect it to be. With the era of technology, hate speech is on the rise. As hate speech grows and become more mainstream, it’s more important now than ever that everyone learns what hate speech is and how to identify it in everyday life, lest this nation become a cesspool of hatred, too dangerous for those it targets to reside in. Although many might claim that words are just words, hate speech can tear away the sense of safety of those it targets, and lead to senseless violence. Anyone can be a target of hate speech, but there are those who are more vulnerable to it than others due to a social environment that has created an unequal distribution of power among its people. To protect those who come under fire of hate speech, most commonly those who belong to the LGBT+, people of color, and those who practice a religion outside of Christianity, the American people must actively recognize and shut down unfounded statements and actions. In order to do so, we must be able to dissect and debunk the logic fallacies used by their perpetrators to spread hateful ideology before they can bring upon widespread ignorance.

A common way those with hateful ideas and intentions recruit others into their way of thinking is with a fallacy we call bandwagon appeal. Bandwagon appeal is the argument that since everyone is already participating or following an ideal, so you should also follow suit. Brian S. Brown and his colleagues used this fallacy to justify and spread their anti-trans ideology. In New York, a Free Speech Bus with transphobic messages such as “girls have vaginas, boys have penises, don’t be deceived,” has been parked in many areas throughout the city. This bus and its supporters aim to deny and erase the identities of transgender individuals by claiming their orientation is a lie that they’ve made up because they cannot love themselves. “It’s biology, not bigotry,” Brian S. Brown claims, “Men and women were created equally, each given a gender that is fixed, immutable and complementary. Rather than perpetuate a lie that gender can be changed based on emotions and feelings, we should encourage people to embrace and live who they were made to be.” Brown and his group are spreading their hate and ignorance under the guise of self love, saying that if those who identify as trans can learn to love themselves as their gender assigned to them at birth like his group and a large portion of society, they would realize that their identities are “fake” (Wanshel). Brown and his group are a classic example of “I don’t experience this, therefore no one does.” By denying the existence of trans identities, Brown and his group are directly harming the transgender and nonbinary community by discouraging the acceptance of the personal experiences of millions. Denial of one’s entire identity, can in turn lead to violence toward the transgender and nonbinary community when those who are even less tolerant, take their transphobic teachings to another level. One cannot teach self love if they’re not willing to embrace the differences that come along with being human.

Another extremely common logic fallacy used to spread unfounded beliefs is scare tactics. Scare tactics rely on deception to inspire the fear of something or someone in those who haven’t been properly educated in a particular subject. There is no reason or evidence behind these claims, only prejudice. This fallacy was put to use by Mark Feigin when he placed an alleged call to a mosque in his area. During this call, he’s said to have threatened to kill all the Muslims who attended the mosque, for no reason other the fact that they followed the Muslim faith. Feigin has previously been known to state that he believes that Muslims are ‘dangerous savages and that their religion is inherently violent. When spoken to about his views, he made the statement, “The more Muslim savages we allow into America – the more terror we will see.” This statement is clearly meant to instill a fear of those who follow the Muslim faith, from a generalization that Feigin has made about the Muslim community and their faith. He has even gone as far as to say that the 2015 Paris terror attacks were deserved by the French people for having ‘lax security and for allowing so many immigrants into the country’ (Glover). Like all scare tactics, Feigin has no basis for his claims. He often used previous terror attacks committed by Muslim individuals to justify his claims, failing to acknowledge that crimes are committed by those of all races and religions. Stating that one group is more violent than others because of a few individuals who happened to follow the same faith as them is a blanket statement, that will bring more harm than it will good.

The final logic fallacy that will be covered here, while it is not the last of all the fallacies, are the faulty analogies that lead to the Charlottesville demonstration. The previous two examples with ‘free speech bus’ and Feigin’s hateful view of Muslims are examples of hate speech that kept itself in the form of propaganda. With those, one may argue that words are just words, as these individuals didn’t physically harm those their hate speech had targeted. Words are just words. But with the events that took place in Charlottesville, we’re forced to see the consequences of hate, and that hate speech isn’t just another case of ‘sticks and stones may break my bones, but words will never hurt me.’

In the late summer of 2017, a demonstration took place in Charlottesville, Virginia protests broke out in opposition to the removal of a Robert E. Lee statue from Emancipation Park. The proposal of this statue being removed from the park angered many who belonged to white nationalist, neo-Confederate, and neo-Nazi groups. When these groups organized to protest the removal, their protests included chants such as “Hail victory,” an english translation of “Sieg heil,” previously used to honor Adolf Hitler, and “Fuck you faggots.” Statements such as these encourage violence against both the Jewish and LGBT+ communities, but these were not the only targets of their hate. Many protesters were chanting slogans the follow the idea that ethnic and religious diversity of any kind would lead to the downfall of America, along with a ‘white genocide.’ Eventually, their calls for violence were met by a man named James Alex Fields Jr.. During the rally Fields drove his car into a crowd of counter-protesters, killing one woman by the name of Heather D. Heyer and injuring 19 others (Heim). This horrific incident was an example among many others as to just how damaging hate speech can be. Not only is hate speech damaging to one’s mental health, but it can result in the physical harm of people, and even death for those who find themselves as unfortunate as Heyer.

Hate speech is a widespread phenomenon and it is growing. Now that we live in the era of technology, it is only that much easier for hateful individuals to find others who share their views and grow more confident. For our society to become the best and safest it can be, these views can no longer be tolerated. Those who want to elevate their views by harming others must be shut down by those who are there to hear them; Silence is no longer an option. These hateful views aren’t grounded in evidence or reason, but rather ignorance, and there is no reason to allow them take root. In order to snip the bud before it blossoms, the American people need to make efforts in not only rejecting hate, but enlighten the generations that come after them. It’s not enough to merely teach our children that they must accept the difference of others and expect that they will be able to apply it to everyone they meet. If we want our society to grow with love and compassion, it’s absolutely necessary to teach understanding along with acceptance. People must be able to understand the diversity around them in order to accept and embrace it, as they won’t be able to fall victim to logic fallacies such as fear mongering if they understand the groups that are being attacked. Understanding is a powerful tool that can be used against hate, and it begins with the active embracement of the diversity of the human race.

Hate Speech and Its Effects on Individuals of Society. (2022, Nov 23). Retrieved from https://papersowl.com/examples/hate-speech-and-its-effects-on-individuals-of-society/

Hate Speech should not be Tolerated Inside School Campus

Hate Crime should be Punished