Graphic Violence in the Media 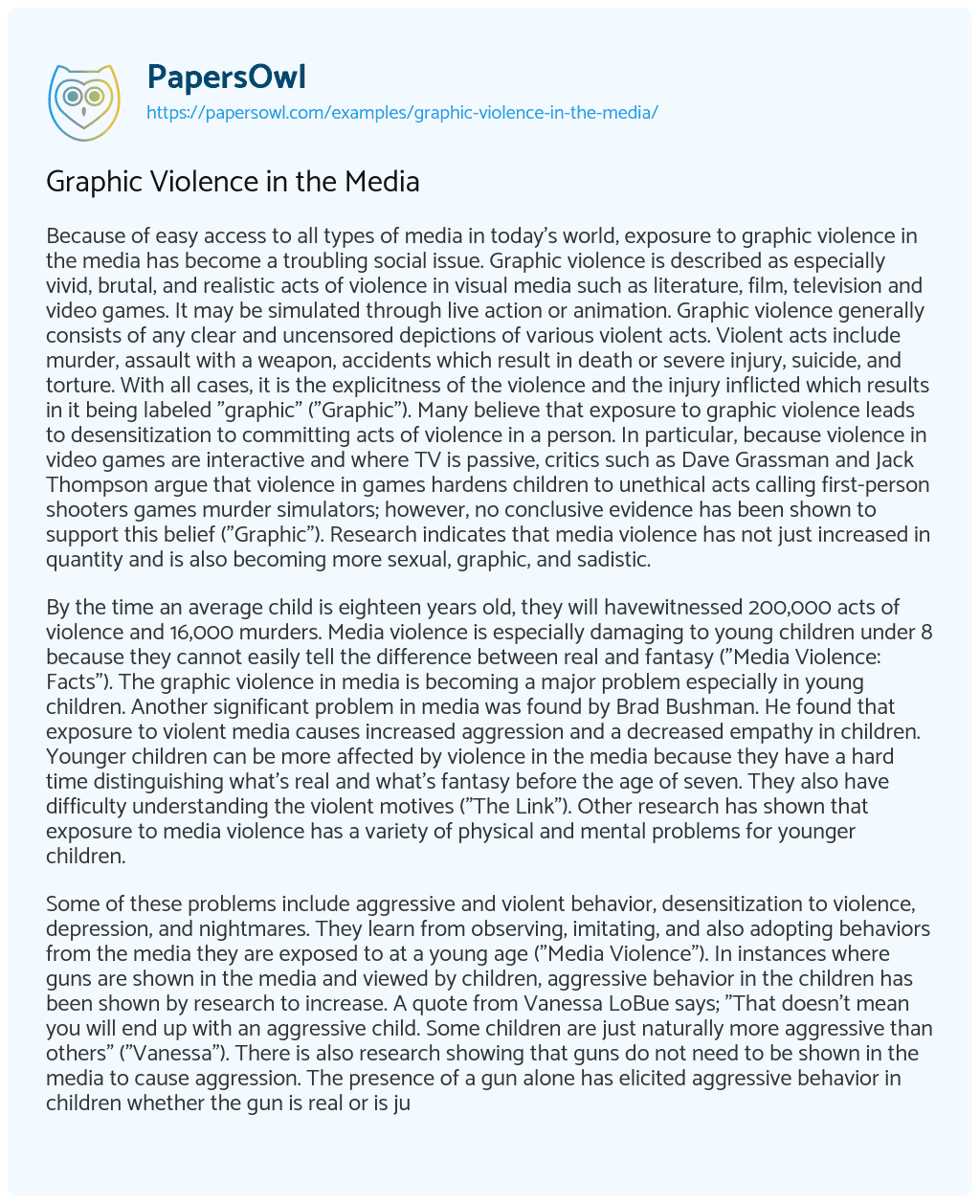 Because of easy access to all types of media in today’s world, exposure to graphic violence in the media has become a troubling social issue. Graphic violence is described as especially vivid, brutal, and realistic acts of violence in visual media such as literature, film, television and video games. It may be simulated through live action or animation. Graphic violence generally consists of any clear and uncensored depictions of various violent acts. Violent acts include murder, assault with a weapon, accidents which result in death or severe injury, suicide, and torture. With all cases, it is the explicitness of the violence and the injury inflicted which results in it being labeled “graphic” (“Graphic”). Many believe that exposure to graphic violence leads to desensitization to committing acts of violence in a person. In particular, because violence in video games are interactive and where TV is passive, critics such as Dave Grassman and Jack Thompson argue that violence in games hardens children to unethical acts calling first-person shooters games murder simulators; however, no conclusive evidence has been shown to support this belief (“Graphic”). Research indicates that media violence has not just increased in quantity and is also becoming more sexual, graphic, and sadistic.

By the time an average child is eighteen years old, they will havewitnessed 200,000 acts of violence and 16,000 murders. Media violence is especially damaging to young children under 8 because they cannot easily tell the difference between real and fantasy (“Media Violence: Facts”). The graphic violence in media is becoming a major problem especially in young children. Another significant problem in media was found by Brad Bushman. He found that exposure to violent media causes increased aggression and a decreased empathy in children. Younger children can be more affected by violence in the media because they have a hard time distinguishing what’s real and what’s fantasy before the age of seven. They also have difficulty understanding the violent motives (“The Link”). Other research has shown that exposure to media violence has a variety of physical and mental problems for younger children.

Some of these problems include aggressive and violent behavior, desensitization to violence, depression, and nightmares. They learn from observing, imitating, and also adopting behaviors from the media they are exposed to at a young age (“Media Violence”). In instances where guns are shown in the media and viewed by children, aggressive behavior in the children has been shown by research to increase. A quote from Vanessa LoBue says; “That doesn’t mean you will end up with an aggressive child. Some children are just naturally more aggressive than others” (“Vanessa”). There is also research showing that guns do not need to be shown in the media to cause aggression. The presence of a gun alone has elicited aggressive behavior in children whether the gun is real or is just a toy (“Vanessa”). Now, we are in a generation that is growing up with violence in the media everywhere.

A quote from Teddy Wayne says that “as younger generations eschew television and print media,their only exposure to news may be on their phones, often through social media feeds”. “But whereas traditional news outlets are likely to issue a warning before broadcasting graphic images or decide to censor the most offensive content are often ignored on the web, especially from individuals and less established” (“Teddy”). So how can we help solve the problem of graphic violence in the media? Knowing the rating systems of television and video games is a good way to avoid violence in media (“Nancy”). You can join organizations that counter media violence. Another way is to have zero-tolerance policy for violent media in the home or classroom. Video games should be researched before buying. The age and stage of development matter in the interpreting of visually violent images. As children become verbally able to express ideas and feelings, adults can discuss with them violence in the media (“Gloria”).

The graphic violence in the media creates problems in our society, especially in the younger generation. The effects of graphic violence in the media are disturbing but not surprising. More and more alarming are the acts of violence we see in today’s media on a daily basis. No one knows the best solution. Experts don’t agree that any single factor can cause a nonviolent person to act aggressively. Heavy exposure to violent media can be a risk factor for violent behavior. Parents can make a choice to expose their children to media that reflect their own personal values and beliefs (“Carolina”). As a start knowing what your child should or should not be viewing can be a solution. In hundreds of studies that have been conducted over decades, the research into media violence has proved conclusive. While media violence is not a sufficient cause of violence, it does cause increased aggressiveness and violent behavior (“Michel”).

Television violence research has also shown connections between violent images and people’s specific aggressive behavior and /or their perception of fears (“Nancy”). People must have a keen awareness of the media content. The world needs to be protective of the media they are allowing children to see.

Graphic Violence in the Media. (2019, Jan 04). Retrieved from https://papersowl.com/examples/graphic-violence-in-the-media/

Violence in the Mass Media

Violence Caused by Media or not