Give Title and Citations 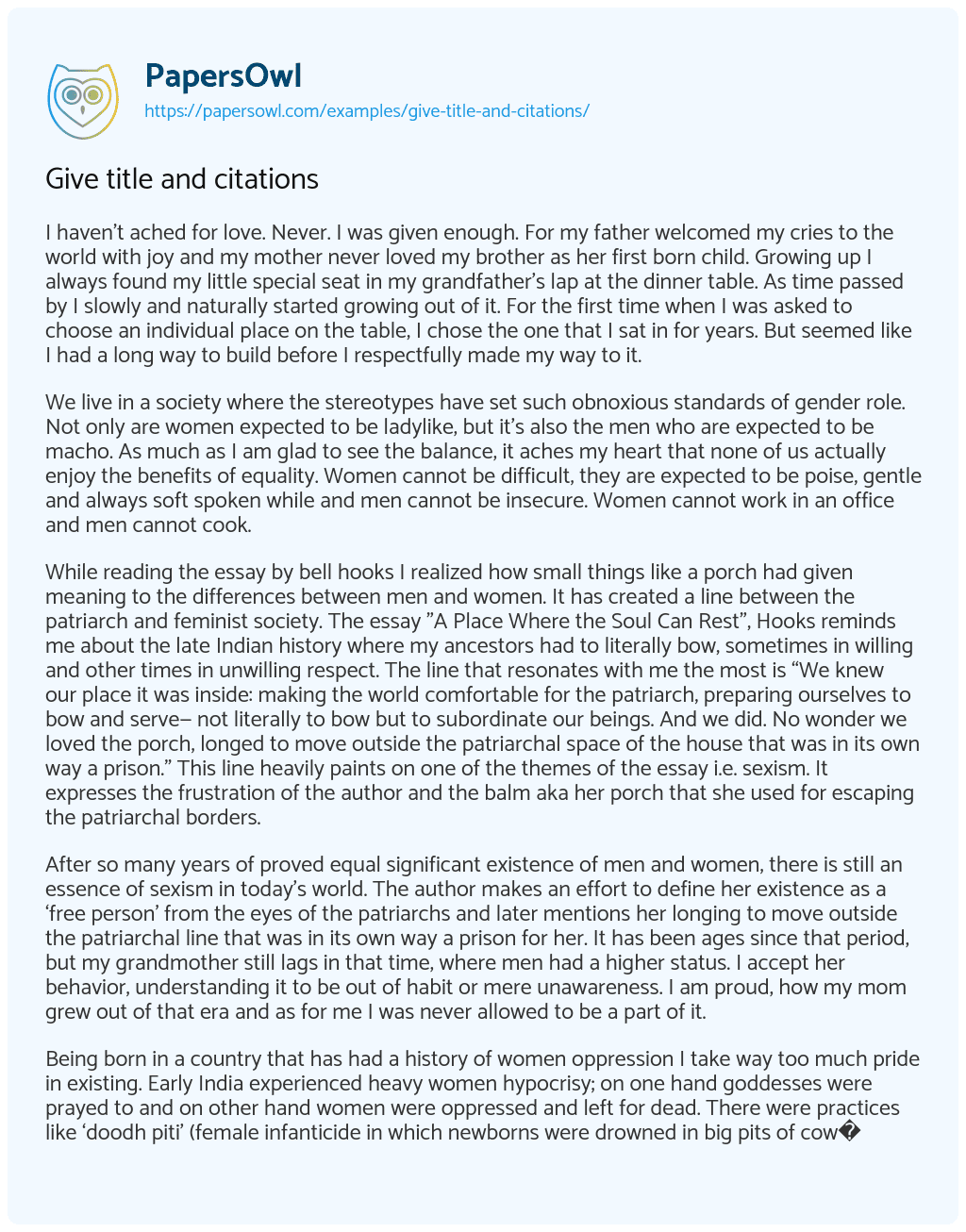 I haven’t ached for love. Never. I was given enough. For my father welcomed my cries to the world with joy and my mother never loved my brother as her first born child. Growing up I always found my little special seat in my grandfather’s lap at the dinner table. As time passed by I slowly and naturally started growing out of it. For the first time when I was asked to choose an individual place on the table, I chose the one that I sat in for years. But seemed like I had a long way to build before I respectfully made my way to it.

While reading the essay by bell hooks I realized how small things like a porch had given meaning to the differences between men and women. It has created a line between the patriarch and feminist society. The essay “A Place Where the Soul Can Rest”, Hooks reminds me about the late Indian history where my ancestors had to literally bow, sometimes in willing and other times in unwilling respect. The line that resonates with me the most is “We knew our place it was inside: making the world comfortable for the patriarch, preparing ourselves to bow and serve— not literally to bow but to subordinate our beings. And we did. No wonder we loved the porch, longed to move outside the patriarchal space of the house that was in its own way a prison.” This line heavily paints on one of the themes of the essay i.e. sexism. It expresses the frustration of the author and the balm aka her porch that she used for escaping the patriarchal borders.

After so many years of proved equal significant existence of men and women, there is still an essence of sexism in today’s world. The author makes an effort to define her existence as a ‘free person’ from the eyes of the patriarchs and later mentions her longing to move outside the patriarchal line that was in its own way a prison for her. It has been ages since that period, but my grandmother still lags in that time, where men had a higher status. I accept her behavior, understanding it to be out of habit or mere unawareness. I am proud, how my mom grew out of that era and as for me I was never allowed to be a part of it.

Being born in a country that has had a history of women oppression I take way too much pride in existing. Early India experienced heavy women hypocrisy; on one hand goddesses were prayed to and on other hand women were oppressed and left for dead. There were practices like ‘doodh piti’ (female infanticide in which newborns were drowned in big pits of cow’s milk). It was a major practice specially in the Indian regions of Kutch and Saurashtra which had one of the most uneducated and backward thinking community. For them we were a waste of space and an undeserving existence to their world. And if by chance if the girl child survived the ‘doodh piti’ there was always a hanging sword on her neck in the form of another practice called ‘Sati’. Sati was a form of an involuntary suicide committed by the widow because after her husband’s death she had seized herself of her right to exist in this world. The woman had to jump in her husband’s pyre and give up her life shortly after her husband’s death.

Why can’t I be the bread earner? Why can’t I be the protector of the house? It is like certain qualities of those fiery women of history have been purposely eroded with time, setting stereotypes of being ladylike. Cleopatra was a poet and a philosopher but today the entire world only knows her as a symbol of beauty and seduction.

It wasn’t until my Grandfather threw light on his belief that I really got to know a women’s importance. One Sunday morning, I woke up to the noise of the mortar and the pestle. I walked down to the kitchen from my room and was almost surprised to see grandpa crushing a bunch of herbs on the instructions of grandma. It was a rare sight to see any men in the Patel kitchen. Not that dad and grandpa were patriarchally reluctant, it’s just that they never learnt to use half of the stuff there. As I walked and greeted my grandparents a very good morning, grandpa lovingly offered to make me a cup of tea. While enjoying the first morning cup on our double faced swing, grandpa asked me, “Dear, do you know what is the similarity between this cup of tea and a woman?” I was kind of taken aback by the weird association he made, so I nodded sideways. He looked at me in utter love, and said, “This cup of tea symbolizes the women of the house. The ingredients; Tulsi which is pious and pure, cardamom which is soothing and ginger which is spicy. As a whole, you, your mother and grandmother are the comforting pillars of our house and it gives me so much happiness to see these pillars strengthening day by day.”

From that day, I have always had a very complex but a peaceful understanding with my thoughts on feminism. I consider my grandfather to be the change and the present thought structure surrounding women importance. Unlike others or for now the author bell hooks, I don’t count myself a feminist, not because people believe it’s a cynical word and it means hating on men, but because I like the adversity created by the inequality between men and women. I think that it gives meaning to the difference I create in this world, it highlights my achievements because I was or may be still am (I don’t know) disadvantaged. Every day I take a step forward believing in my feminine power while thanking all those magical women whose efforts gave me the privilege to be born in a generation of changed perspectives and a chance to walk the fields and cross the bridges that they never could. I owe them so much.

Give title and citations. (2020, Jan 20). Retrieved from https://papersowl.com/examples/give-title-and-citations/

“Give me Liberty or Give me Death” by Patrick Henry

Feminism is a Social Movement and a Field of Study

Are we Living are Potential?