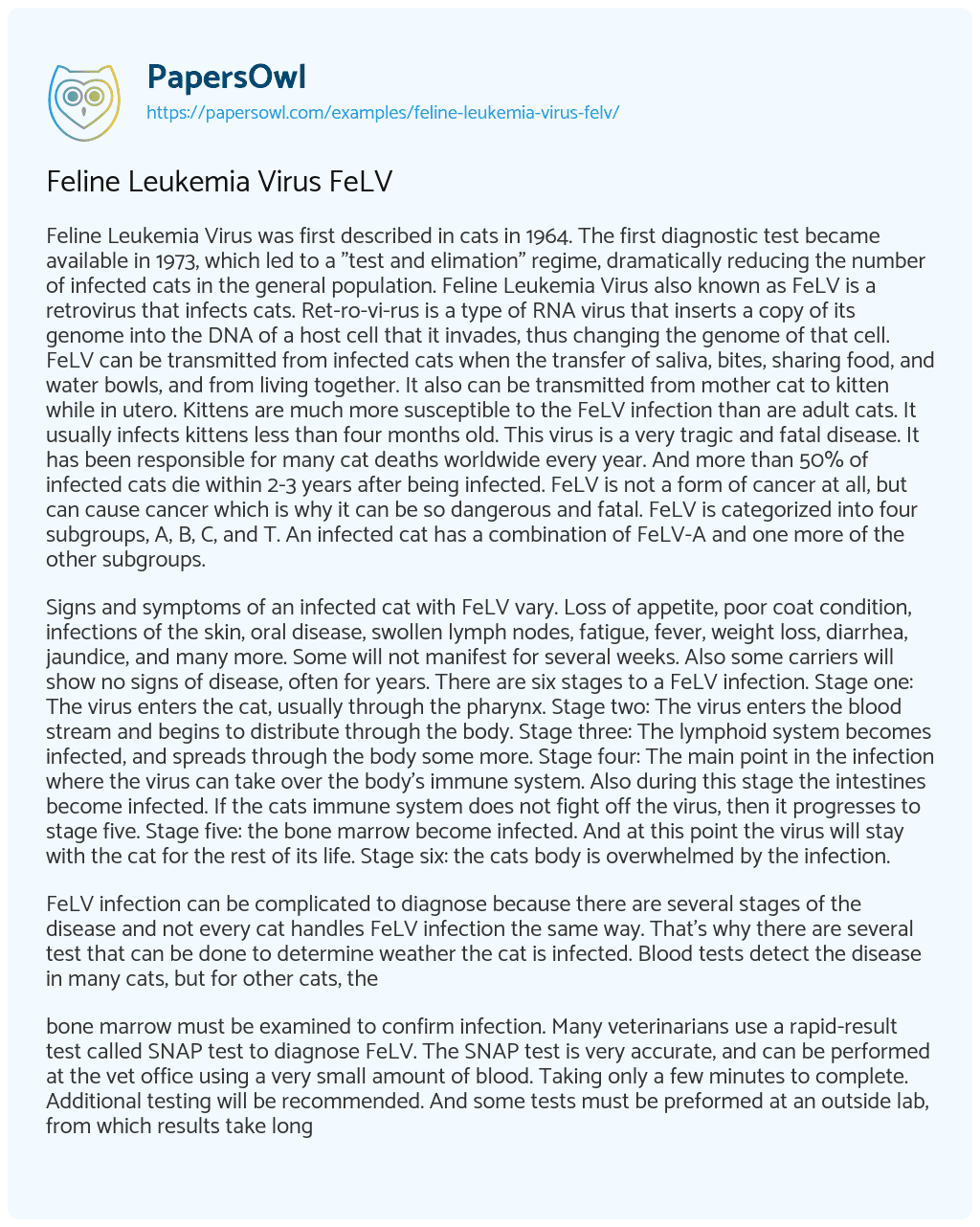 Feline Leukemia Virus was first described in cats in 1964. The first diagnostic test became available in 1973, which led to a “test and elimation” regime, dramatically reducing the number of infected cats in the general population. Feline Leukemia Virus also known as FeLV is a retrovirus that infects cats. Ret-ro-vi-rus is a type of RNA virus that inserts a copy of its genome into the DNA of a host cell that it invades, thus changing the genome of that cell. FeLV can be transmitted from infected cats when the transfer of saliva, bites, sharing food, and water bowls, and from living together. It also can be transmitted from mother cat to kitten while in utero. Kittens are much more susceptible to the FeLV infection than are adult cats. It usually infects kittens less than four months old. This virus is a very tragic and fatal disease. It has been responsible for many cat deaths worldwide every year. And more than 50% of infected cats die within 2-3 years after being infected. FeLV is not a form of cancer at all, but can cause cancer which is why it can be so dangerous and fatal. FeLV is categorized into four subgroups, A, B, C, and T. An infected cat has a combination of FeLV-A and one more of the other subgroups.

Signs and symptoms of an infected cat with FeLV vary. Loss of appetite, poor coat condition, infections of the skin, oral disease, swollen lymph nodes, fatigue, fever, weight loss, diarrhea, jaundice, and many more. Some will not manifest for several weeks. Also some carriers will show no signs of disease, often for years. There are six stages to a FeLV infection. Stage one: The virus enters the cat, usually through the pharynx. Stage two: The virus enters the blood stream and begins to distribute through the body. Stage three: The lymphoid system becomes infected, and spreads through the body some more. Stage four: The main point in the infection where the virus can take over the body’s immune system. Also during this stage the intestines become infected. If the cats immune system does not fight off the virus, then it progresses to stage five. Stage five: the bone marrow become infected. And at this point the virus will stay with the cat for the rest of its life. Stage six: the cats body is overwhelmed by the infection.

bone marrow must be examined to confirm infection. Many veterinarians use a rapid-result test called SNAP test to diagnose FeLV. The SNAP test is very accurate, and can be performed at the vet office using a very small amount of blood. Taking only a few minutes to complete. Additional testing will be recommended. And some tests must be preformed at an outside lab, from which results take longer to receive. When to test? Your veterinarian may want to test your cat if he/she seems to be ill especially if a fever is present. New kittens or cats being introduced to a new home should be tested. Some kittens may test positive at first but test negative later if their immune system has been able to eliminate the infection. And because of this that is why your veterinarian will recommend retesting. Median survival time after diagnosis is 2.5 years.

Vaccination is recommended for all cats at risk of exposure to FeLV, especially those younger than four months of age. Vaccines may protect against FeLV alone or may be included in a vaccine that protects against a variety of feline diseases. Vaccinate against FeLV as early as 8 weeks of age and repeat in 3-4 weeks. Prevention is key. Keep cats indoors, restrict exposure to other cats, clean living environment, and ensure your cat is vaccinated. According to the Merck Veterinary manual, Veterinarians rarely see cases of FeLV among vaccinated cat populations.