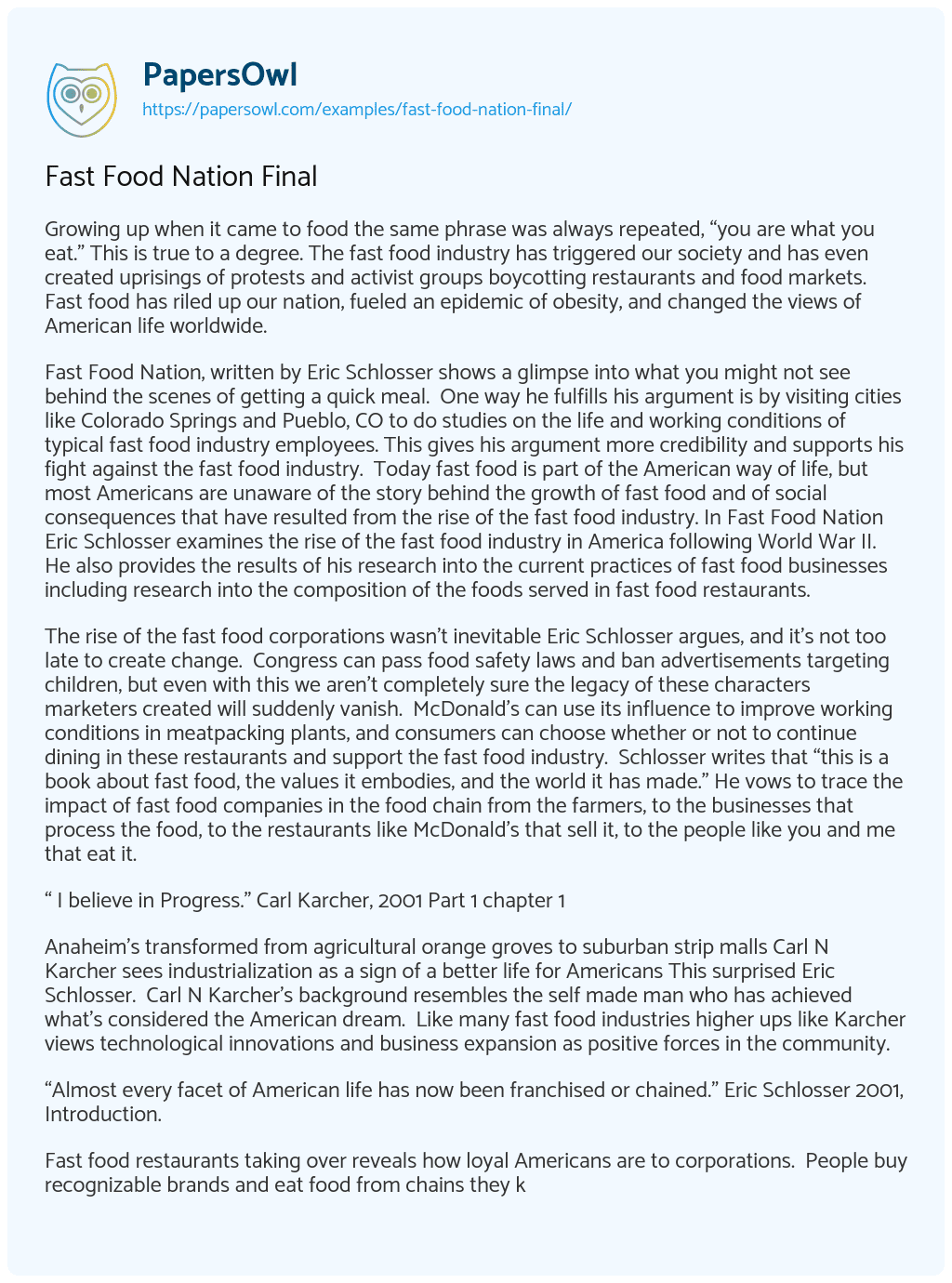 Growing up when it came to food the same phrase was always repeated, “you are what you eat.” This is true to a degree. The fast food industry has triggered our society and has even created uprisings of protests and activist groups boycotting restaurants and food markets.  Fast food has riled up our nation, fueled an epidemic of obesity, and changed the views of American life worldwide.

Fast Food Nation, written by Eric Schlosser shows a glimpse into what you might not see behind the scenes of getting a quick meal.  One way he fulfills his argument is by visiting cities like Colorado Springs and Pueblo, CO to do studies on the life and working conditions of typical fast food industry employees. This gives his argument more credibility and supports his fight against the fast food industry.  Today fast food is part of the American way of life, but most Americans are unaware of the story behind the growth of fast food and of social consequences that have resulted from the rise of the fast food industry. In Fast Food Nation Eric Schlosser examines the rise of the fast food industry in America following World War II.  He also provides the results of his research into the current practices of fast food businesses including research into the composition of the foods served in fast food restaurants.

The rise of the fast food corporations wasn’t inevitable Eric Schlosser argues, and it’s not too late to create change.  Congress can pass food safety laws and ban advertisements targeting children, but even with this we aren’t completely sure the legacy of these characters marketers created will suddenly vanish.  McDonald’s can use its influence to improve working conditions in meatpacking plants, and consumers can choose whether or not to continue dining in these restaurants and support the fast food industry.  Schlosser writes that “this is a book about fast food, the values it embodies, and the world it has made.” He vows to trace the impact of fast food companies in the food chain from the farmers, to the businesses that process the food, to the restaurants like McDonald’s that sell it, to the people like you and me that eat it.

Anaheim’s transformed from agricultural orange groves to suburban strip malls Carl N Karcher sees industrialization as a sign of a better life for Americans This surprised Eric Schlosser.  Carl N Karcher’s background resembles the self made man who has achieved what’s considered the American dream.  Like many fast food industries higher ups like Karcher views technological innovations and business expansion as positive forces in the community.

“Almost every facet of American life has now been franchised or chained.” Eric Schlosser 2001, Introduction.

Fast food restaurants taking over reveals how loyal Americans are to corporations.  People buy recognizable brands and eat food from chains they know such as Mcdonalds.  Eric Schlosser argues that this focus on retail growth has spilled over into other aspects of life, such as what Americans wear, what they drive, what they learn in school, and even how they experience birth and death. The word “chained” can also mean trapped, consumers may be trapped in their lifestyles unless they deliberately make different choices.

“The patterns of land ownership in the American West … resemble those of rural England.” Eric Schlosser, Part 2, Chapter 5

Although many Americans consider that the United States is a place where anyone can make their own fortune through hard work, Eric Schlosser challenges this notion by pointing out economic patterns resembling feudalism and class inequality. Chicken farmers have become “little more than serfs,” with a few dominant chicken processing corporations controlling hundreds of employees. The beef industry has begun to operate in the same way. Farmers and ranchers can’t determine what their animals are worth, and they may not even own their land. Schlosser’s comparison implies American exceptionalism is more myth than truth. The nation is more divided between rich and poor than readers may realize.

Human beings had been made “cogs in the great packing machine.” Eric Schlosser, Part 2 Chapter 7

Eric Schlosser uses a quotation from Upton Sinclair’s The Jungle to illustrate how little the meatpacking industry has changed since 1906. Factory workers are still treated like machine parts. Their injuries are downgraded and they’re considered dispensable. Until the industry sees its employees as people and not parts reform won’t happen.

One of the units I’m using for a connection with this book is the personal and professional qualities of a health care worker.  In this unit we discussed the proper way you as an employee should care for yourself and you patients or in this case employees.  In the book we see the conditions employees worked under and how they were treated as non human, as the quotes above described.  Horrible accidents in and out of the buildings occur where people lose body parts such as arms, hands or fingers.  In one case a few workers tried to clean out a blood collection tank only to be suffocated by hydrogen sulfide fumes.  I think that outrageous considering accidents happen every day. “The death of a worker on the job was punished with a fine of just a few hundred dollars…” Eric Schlosser 179.  It’s crazy to me that they got away with working in such poor working environments especially with open wounds in a food industry.  This isn’t just infecting one persons food like a sick waitress at a restaurant, this is the potential spread of infection from one person to possibly thousands of people, because the virus isn’t found on the hamburger of an unsuspecting victim, It’s found within the ingredients which will also be used on the next person’s meal and the next person’s meal until it takes a team of people to investigate it and recall that specific food then who knows who all it’s infected by then!   Workers with fatal injuries were told to come the next day to work and do “easy jobs,” in order to cover up the injuries so that nobody was missing that day. This organization never achieved its purpose, however it made people think that they would be more safe.

This brings me into the next unit we discussed which is infection control.  I talked about it in the last paragraph but I’m going to touch on a little more of what was discussed in our unit.  During one of the first days in class we played a game titled “infection control.”  In this game we showed how one person starting off with a disease can interact with other people and spread diseases through everyday occurrences.  Now let’s take that so called “infected person” and see how being forced into working and handling our food how that infection would spread to tons of other meals that people are ingesting.

My opinion of this book changed depending on what chapter I was reading.  I understand this book was made to inform us about the dangers and risks with eating fast food.  Regulations have changed a lot though since this book was written to ensure safe working environments for the people that serve us.  I didn’t enjoy all the statistics in the book I much more enjoyed learning about the crazy amount of people that went through things like maybe forcing to come to work sick.  I’m not sure how I feel about the overall message and how harsh and how the author immediately makes you feel guilty for just at these establishments like it’s all our fault for the way some workers are mistreated by our demands.  If anything I feel like it should be the job of safety regulations working for these establishments.  I would recommend reading this book if you want to be informed about unhealthy working conditions and want to feel horrible about yourself for every trip to Mcdonalds you’ve went to.

Demise of Public Transportation and the Rise of Fast Food

The History of Fast Food

The History of Fast Food