Events Leading to the War 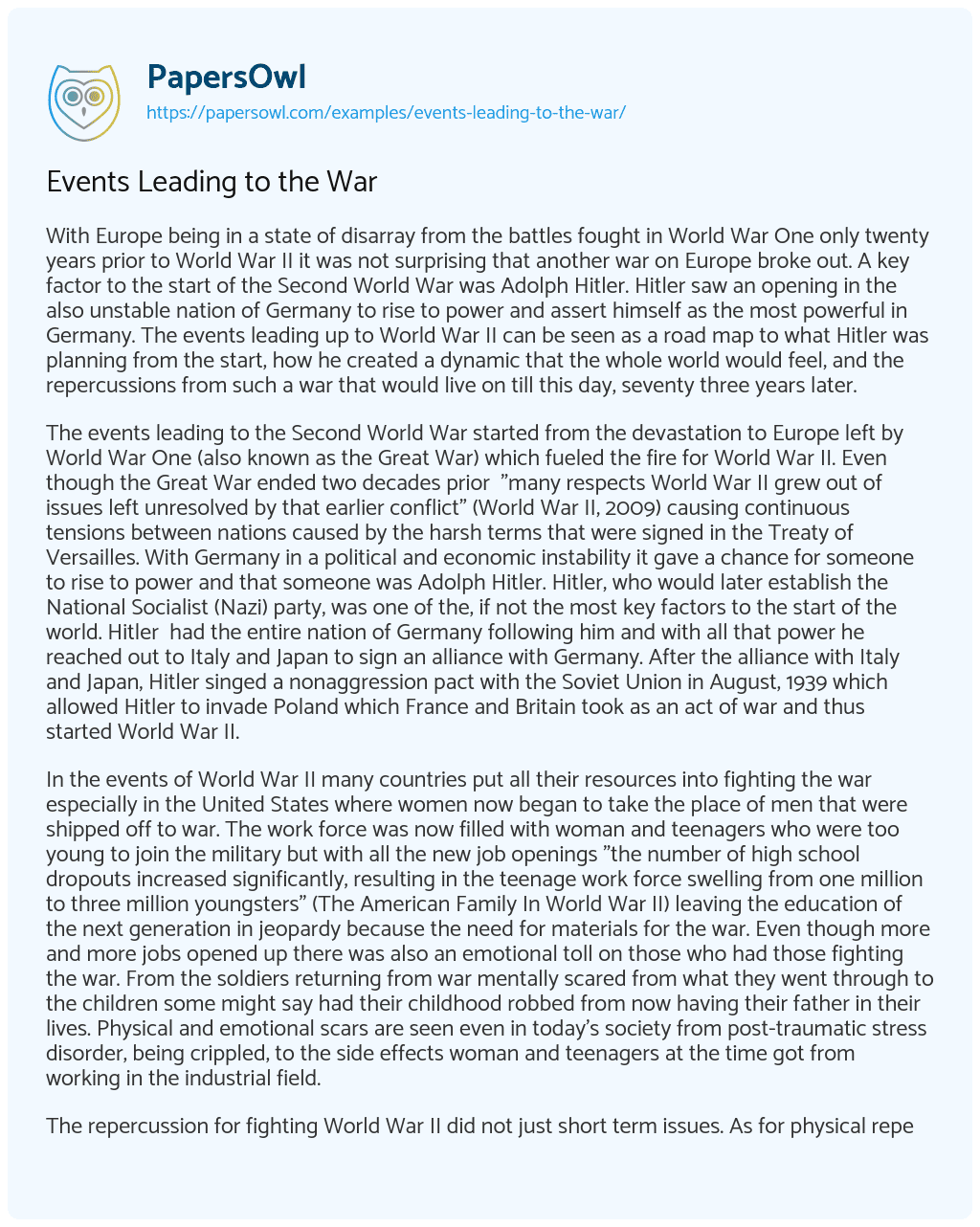 With Europe being in a state of disarray from the battles fought in World War One only twenty years prior to World War II it was not surprising that another war on Europe broke out. A key factor to the start of the Second World War was Adolph Hitler. Hitler saw an opening in the also unstable nation of Germany to rise to power and assert himself as the most powerful in Germany. The events leading up to World War II can be seen as a road map to what Hitler was planning from the start, how he created a dynamic that the whole world would feel, and the repercussions from such a war that would live on till this day, seventy three years later.

The events leading to the Second World War started from the devastation to Europe left by World War One (also known as the Great War) which fueled the fire for World War II. Even though the Great War ended two decades prior  “many respects World War II grew out of issues left unresolved by that earlier conflict” (World War II, 2009) causing continuous tensions between nations caused by the harsh terms that were signed in the Treaty of Versailles. With Germany in a political and economic instability it gave a chance for someone to rise to power and that someone was Adolph Hitler. Hitler, who would later establish the National Socialist (Nazi) party, was one of the, if not the most key factors to the start of the world. Hitler  had the entire nation of Germany following him and with all that power he reached out to Italy and Japan to sign an alliance with Germany. After the alliance with Italy and Japan, Hitler singed a nonaggression pact with the Soviet Union in August, 1939 which allowed Hitler to invade Poland which France and Britain took as an act of war and thus started World War II.

In the events of World War II many countries put all their resources into fighting the war especially in the United States where women now began to take the place of men that were shipped off to war. The work force was now filled with woman and teenagers who were too young to join the military but with all the new job openings “the number of high school dropouts increased significantly, resulting in the teenage work force swelling from one million to three million youngsters” (The American Family In World War II) leaving the education of the next generation in jeopardy because the need for materials for the war. Even though more and more jobs opened up there was also an emotional toll on those who had those fighting the war. From the soldiers returning from war mentally scared from what they went through to the children some might say had their childhood robbed from now having their father in their lives. Physical and emotional scars are seen even in today’s society from post-traumatic stress disorder, being crippled, to the side effects woman and teenagers at the time got from working in the industrial field.

The repercussion for fighting World War II did not just short term issues. As for physical repercussions the major issue was “At the end of World War II Germany, Italy and most of France lay in ruins while Great Britain was bankrupt” (The End Game: the consequences of World War II, 2010) leaving them at a state of need for materials and safety from any other would be attackers if there was any. With the rebuilding across the European nation the United States lent out a hand and helped the rebuilding process offering not only materials but safety with its military. With the fall of the European Great Power System a process called decolonization started to occur. The issue with the Great Power System being destroyed it caused bipolar tendencies throughout the world because now the United States and the USSR were now the most powerful in the world. This caused the 50 year standoff between the Soviet Union and the United states which would be called the Cold War. However with the axis powers defeated and losing their control over oversea colonies, the controlled colonies were forced to surrender to the allies. As for the economic damage, the only nation that was still economically intact from the war was the United States, other nations such as Europe, Asia, and Germany didn’t fare well during the aftermath of the war. The cold war developed two economies, free market, and planed economy. The Soviets used the planned economy as for the allies they used the free market economy, as for the former colonies now free tried to combine both free market and planed so that they could get the best of both worlds. This resulted in this combining of the two economies was very unsuccessful leading to the switch to marker economies in the late 1980s.

In conclusion the prior events leading to the war to the ending, the world still feels the impact from the devastating power of a world war.  Whether you were alive to experience the effects from the war or not you can easily find someone who has memories from those harsh times. When you look back at the mass destruction that occurred it’s hard to believe we are where we are today, not only economically but also politically with the ones we called the “enemy”. World War II will be forever in bedded into the records of the nations involved as for the people who lived it, the impact of the war will be with them for as long as they live and those who they share their story with.

Events Leading to the War. (2019, Jun 29). Retrieved from https://papersowl.com/examples/events-leading-to-the-war/

The Alliance System as the Leading Cause of World War i

The Holocaust is One of the Worst Events in Human History

Review on Gandhi Letter to Hitler