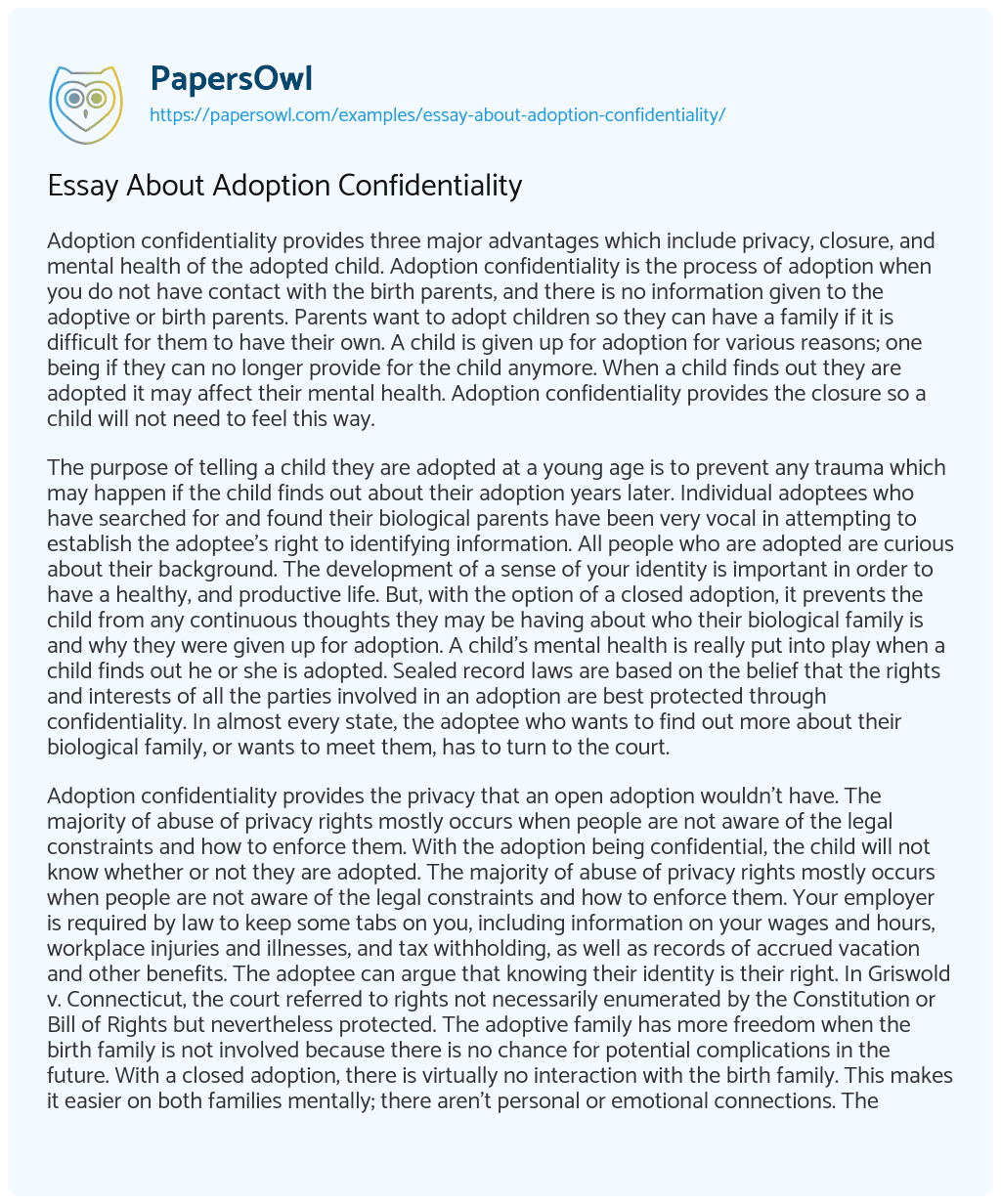 Adoption confidentiality provides three major advantages which include privacy, closure, and mental health of the adopted child. Adoption confidentiality is the process of adoption when you do not have contact with the birth parents, and there is no information given to the adoptive or birth parents. Parents want to adopt children so they can have a family if it is difficult for them to have their own. A child is given up for adoption for various reasons; one being if they can no longer provide for the child anymore. When a child finds out they are adopted it may affect their mental health. Adoption confidentiality provides the closure so a child will not need to feel this way.

The purpose of telling a child they are adopted at a young age is to prevent any trauma which may happen if the child finds out about their adoption years later. Individual adoptees who have searched for and found their biological parents have been very vocal in attempting to establish the adoptee’s right to identifying information. All people who are adopted are curious about their background. The development of a sense of your identity is important in order to have a healthy, and productive life. But, with the option of a closed adoption, it prevents the child from any continuous thoughts they may be having about who their biological family is and why they were given up for adoption. A child’s mental health is really put into play when a child finds out he or she is adopted. Sealed record laws are based on the belief that the rights and interests of all the parties involved in an adoption are best protected through confidentiality. In almost every state, the adoptee who wants to find out more about their biological family, or wants to meet them, has to turn to the court.

When it’s a closed adoption, the child does not form an emotional connection with their birth parent. The family they are being adopted by does not have any relationship with the birth parents. In an independent or private adoption, a child is placed with adoptive parents without the assistance of an agency. Children who are in foster care are typically removed from their biological parents or original home for protective reasons. Mental closure with a closed adoption will typically help the child’s mental.If an adoption was revealed to you at a later stage in your life, it is possible that you may feel angry or betrayed towards your adoptive parents. It gives them a sense of a secure family, as their birth parents cannot care for them. The child will not feel split between the birth parents and their adoptive families if they do not have a relationship with both. The child is also protected, and not exposed to any harmful or destructive habits the biological parents might have, like addiction or substance abuse.

Overall, closed adoption can really be beneficial to a child’s mental health, and the life ahead of them. With the sense of closure about the biological family background, it gives the child no knowledge of any family they are no longer connected to. For the adoptive parents, a closed adoption gives the parents the choice of whether or not to tell the adopted child if they are adopted. Adoption confidentiality protects the child from any interference in their life about who their biological parents are. In some circumstances, it is possible for an adoption to happen without parental consent. If a court terminates parental rights because of abuse, neglect, or abandonment, then the child is free for adoption. A closed adoption can also protect the child from any dangerous habits the biological parents may have had.

Adoption confidentiality provides 3 major disadvantages which include the adoptive parents feeling guilt, the child not knowing their real identity, and having complete isolation from their biological family. A closed adoption does not benefit the child, as they are given no choice throughout the process. The child has no interaction between them and the birth parents. Since the child has no knowledge of their identity, the adopted child may feel very frustrated. An adopted child has the right to know about their identity.

The adoptive parents of the child will feel guilt of keeping their adoption a secret. The feeling of loss are expected to the separation between the mother and the child through the adoption process and the experience has been compared to which happens in cases of perinatal death. Birth mothers who experience grief and difficulty in association with placing a child for adoption may specifically report feelings of loss, sadness/depression, guilt, remorse, and anger. Not only do the adoptive parents feel guilt in the adoptive process, but the biological family does as well. The biological family may feel a sense of guilt throughout the adoptive process. If an adoption was revealed to you at a later stage in your life, it is possible that you may feel angry or betrayed towards your adoptive parents.

Adopted children have the right to know their identity, and who their biological family is. With a closed adoption, it does not provide the knowledge of a sense of the adopted child’s identity. One recent case may indicate a very restrictive definition of fundamental rights. Even when the principle was related to a First Amendment right-the combination of Ninth Amendment and Equal Protection arguments may provide fertile ground for the establishment of a right to one’s own identity. Both birth parents must consent to an adoption—a birth mother can’t place a child for adoption without the consent of the child’s presumed father. Also, once the biological parents give up the child for adoption, there is no turning back; you cannot change your mind about seeing “your” child again. The biological parents will have no information, pictures, or updates on how the child is doing. The adopted child will also have no cultural history or medical history.

Adoption is at the Core Center of Islam Essay

Adoption is a very Challenging Process