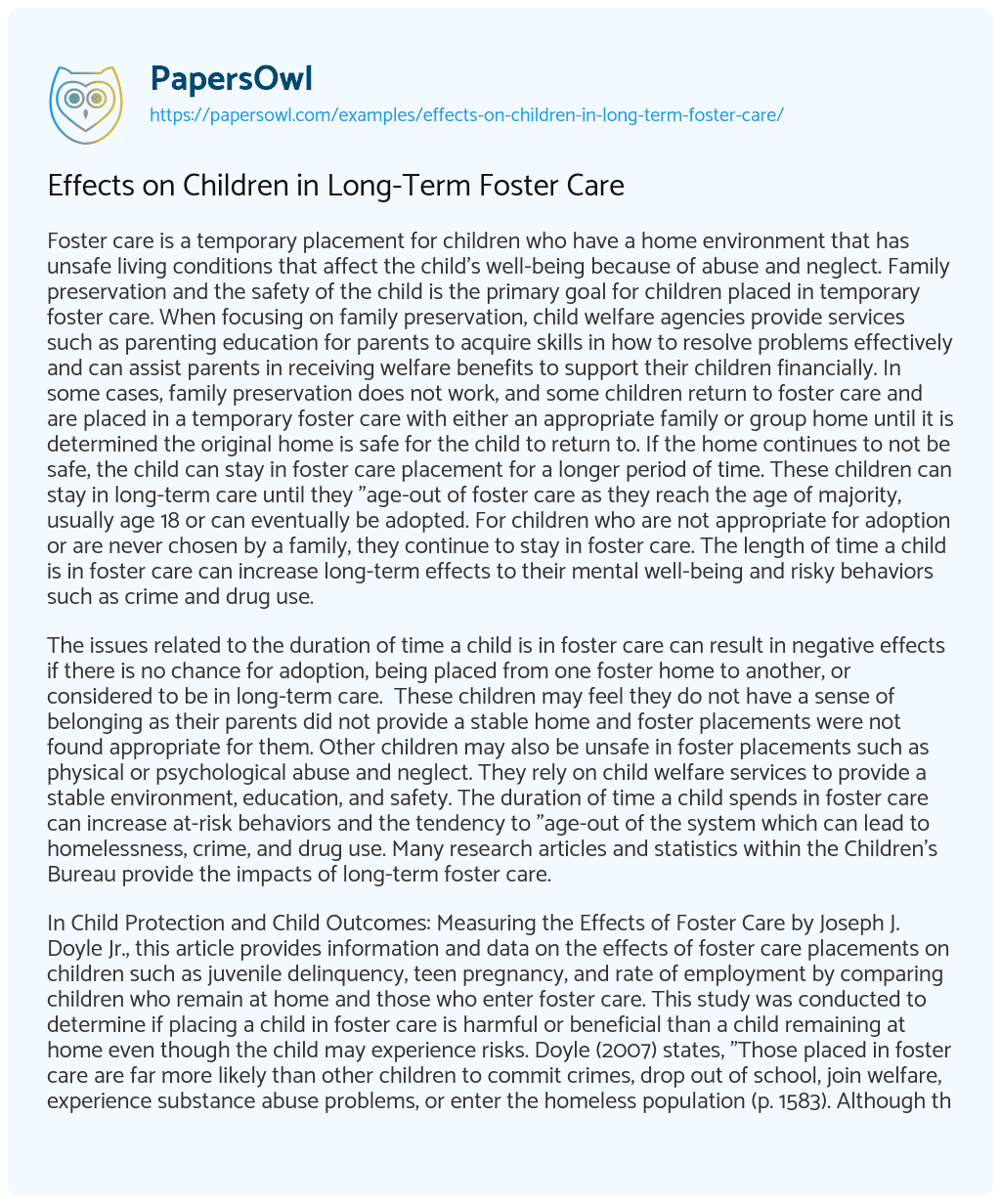 Foster care is a temporary placement for children who have a home environment that has unsafe living conditions that affect the child’s well-being because of abuse and neglect. Family preservation and the safety of the child is the primary goal for children placed in temporary foster care. When focusing on family preservation, child welfare agencies provide services such as parenting education for parents to acquire skills in how to resolve problems effectively and can assist parents in receiving welfare benefits to support their children financially. In some cases, family preservation does not work, and some children return to foster care and are placed in a temporary foster care with either an appropriate family or group home until it is determined the original home is safe for the child to return to. If the home continues to not be safe, the child can stay in foster care placement for a longer period of time. These children can stay in long-term care until they “age-out of foster care as they reach the age of majority, usually age 18 or can eventually be adopted. For children who are not appropriate for adoption or are never chosen by a family, they continue to stay in foster care. The length of time a child is in foster care can increase long-term effects to their mental well-being and risky behaviors such as crime and drug use.

The issues related to the duration of time a child is in foster care can result in negative effects if there is no chance for adoption, being placed from one foster home to another, or considered to be in long-term care.  These children may feel they do not have a sense of belonging as their parents did not provide a stable home and foster placements were not found appropriate for them. Other children may also be unsafe in foster placements such as physical or psychological abuse and neglect. They rely on child welfare services to provide a stable environment, education, and safety. The duration of time a child spends in foster care can increase at-risk behaviors and the tendency to “age-out of the system which can lead to homelessness, crime, and drug use. Many research articles and statistics within the Children’s Bureau provide the impacts of long-term foster care.

In Child Protection and Child Outcomes: Measuring the Effects of Foster Care by Joseph J. Doyle Jr., this article provides information and data on the effects of foster care placements on children such as juvenile delinquency, teen pregnancy, and rate of employment by comparing children who remain at home and those who enter foster care. This study was conducted to determine if placing a child in foster care is harmful or beneficial than a child remaining at home even though the child may experience risks. Doyle (2007) states, “Those placed in foster care are far more likely than other children to commit crimes, drop out of school, join welfare, experience substance abuse problems, or enter the homeless population (p. 1583). Although these risks are increased for children who are placed in foster care, there is inconclusive research on the comparison between how much is contributed to the home environment prior to placement and the trauma of being in foster care.

From the article, Pathways of Older Adolescents out of Foster Care: Implications for Independent Living Services by Mark E. Courtney and Richard P. Barth, a study was conducted of reasons of youth exiting foster care. This includes reaching the age of majority or emancipation, reunification with original caregiver, alternative placement such as a relative, or adoption. The study was conducted in California and included 2, 653 youths at 17 years and older and had spent at least eighteen months in foster care before exiting. The results showed that the majority of youth (59.8%) exited foster care through emancipation, 23.4% had an unsuccessful exit, and 16.8% had either family reunification or adoption. Mark and Barth (1996) state, “Of this sample, who all spent at least 18 months in care before exit, half had spent nearly five years in care, and 10 percent had spent more than 10 years in foster care before their final exit (p. 78). I found this study surprising because of the length of time a youth can remain in foster care and the ways in which they exit such as those who had an unsuccessful exit including runaways.

According to the National Youth in Transition Database (NYTD) Brief #3, reported outcomes were compared among youth ages 17 and 19. Surveys were gathered from youth who participated in available Independent Living Services to provide assistance with the transition into adulthood. The survey includes a comparison in race, ethnicity, gender, age, and demographics. It evaluates six different outcomes of youth transitions such as high-risk behaviors. The NYTD (2014) states, “A higher proportion of youth who had left foster care by age 19 reported being incarcerated within the past two years compared to youth who remained in care (26% versus 13%) (p. 5). Youth who continued their length of stay in foster care experienced less risk to be incarcerated, as well as, having a child, or being referred to substance abuse counseling. Although, youth have a higher chance for risky behaviors entering the foster system, these can increase more when exiting the system as child welfare continues to provide support and stability with Independent Living Services to keep young adults goal-oriented.

According to adoptuskids.org, “Each year, approximately 20,000 youth will age out of the foster care system when they turn 18 or 21, or when they finish high school (depending upon the state in which they live.) These children are at increased risk of poor educational outcomes, experiencing homelessness, and being unemployed (2018). There are benefits; however, to children who are in foster care at an older age. For children who are adopted at age 13 and older, they are more eligible to receive financial aid from Free Application for Federal Student Aid (FASFA) for college tuition as they are considered an independent student (adoptuskids.org).

A current policy for long-term foster care youth is the Adoption and Safe Families Act (AFSA) of 1997. This act amended the Adoption Assistance and Child Welfare Act of 1980. The 1997 act requires hearings for permanency of children within 12 months of being in a placement home after removal of the original home. According to the book Child Welfare and Family Services, this act also prompts the termination of parental rights (TPR) after 15 months out of the first 22 months unless the child is with a relative (Downs, Moore, & McFadden, 2009). If family preservation is no longer an option for the child, TPR allows the child to have other options for care such as adoption. The rise in children not being placed in permanent homes and spending too long in foster care of about three years or more, created a call to action to establish placement in a timely manner. The AFSA also established that permanency planning occurs in a timely manner and included concurrent planning so that while the possibility of reunification could occur for the child and family, other placement options were considered and TPR was requested in case family preservation was no longer an option (Downs et. al., 2009).

I think this policy is effective in decreasing the amount of time children are in foster care as primary parent(s)/caregivers have a limited time to show improvement during reunification with their child. This can allow the child for further options of placement and not have to be held back because of the parents refusing to give up their rights. However, I am conflicted with concurrent planning as although, the primary goal is reunification, I do not agree that the agency also is starting the process for TPR as the parents may not be aware the agency has begun the process and is potentially going behind the parent(s) back. I think the policy should include the knowledge of what concurrent planning includes as part of the parents right to their child as they have not yet given termination of parental rights. I also think the act should focus on children who “age-out of foster care and the possibility of continuing to receive services if they choose to leave without the assistance of Independent Living Services. These young adults, although supported through child welfare, may choose participating in crime and drugs either because of previous abuse from their home and being in foster care for many years. Although, a young adult should be accountable for these actions, I think this act can include an option between the ages of 18 and 21 with an opportunity to continue receiving Independent Living Services as long as they show improvement.

From the research, many articles state that foster placement can increase rates of crime, homelessness, and substance abuse. It also concludes that the longer a child is in foster care after and reunification is no longer an option, the higher chances of a child remaining in long-term care. Although, some research has found that long-term children are at an increased rate of at-risk behaviors, these outcomes are undetermined if they are attributed to foster placements or the abuse and neglect by parents. It can also be from the traumatization of having to be entered into the child welfare system as many children, although unsafe, experience trauma from separating from parents or caregivers. Due to pre-placement factors of abuse, neglect, or an unstable environment, it cannot be fully determined the negative impacts foster care has on children based on length of time because of prior mental health problems.

Students that Grew in the Foster Care System