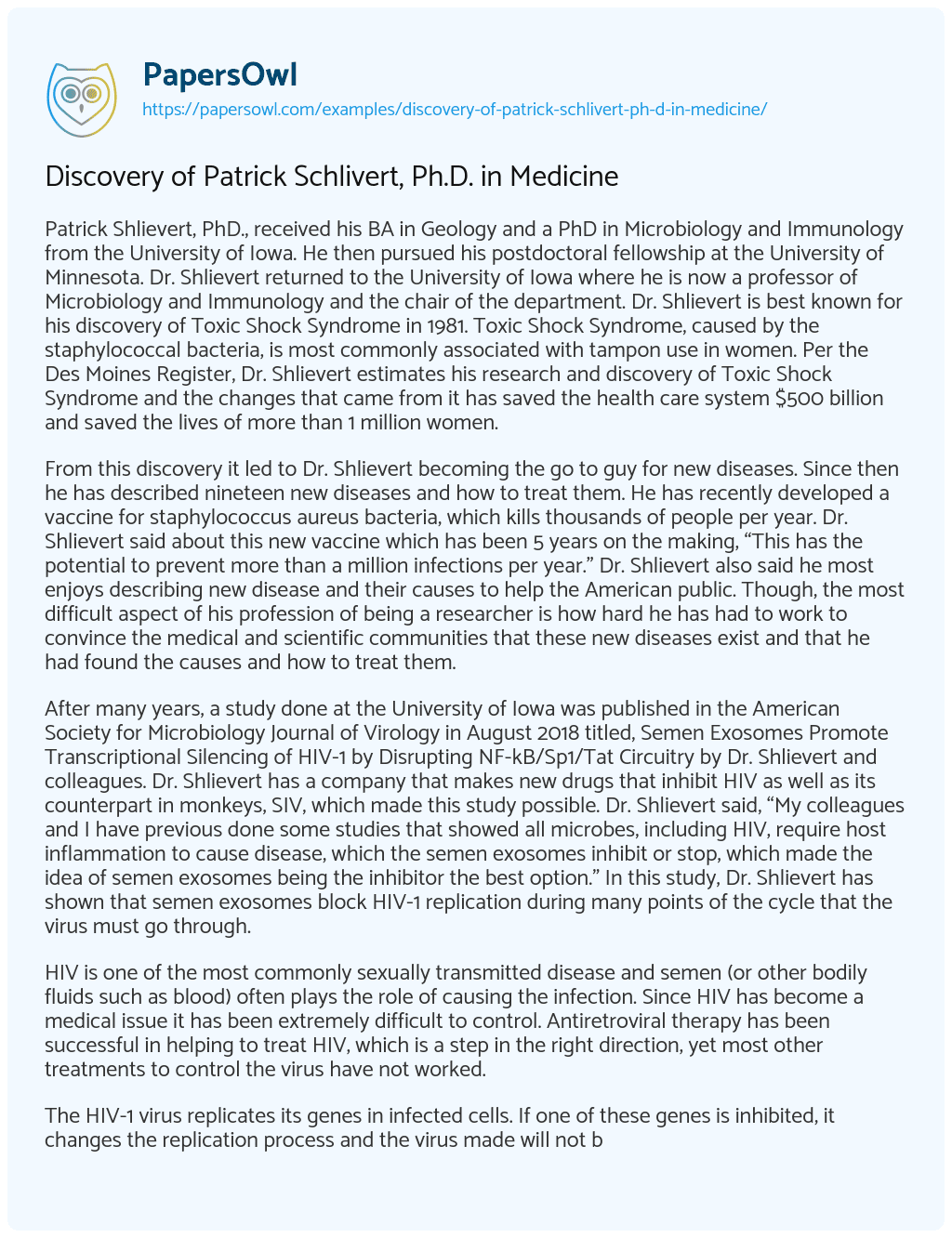 From this discovery it led to Dr. Shlievert becoming the go to guy for new diseases. Since then he has described nineteen new diseases and how to treat them. He has recently developed a vaccine for staphylococcus aureus bacteria, which kills thousands of people per year. Dr. Shlievert said about this new vaccine which has been 5 years on the making, “This has the potential to prevent more than a million infections per year.” Dr. Shlievert also said he most enjoys describing new disease and their causes to help the American public. Though, the most difficult aspect of his profession of being a researcher is how hard he has had to work to convince the medical and scientific communities that these new diseases exist and that he had found the causes and how to treat them.

After many years, a study done at the University of Iowa was published in the American Society for Microbiology Journal of Virology in August 2018 titled, Semen Exosomes Promote Transcriptional Silencing of HIV-1 by Disrupting NF-kB/Sp1/Tat Circuitry by Dr. Shlievert and colleagues. Dr. Shlievert has a company that makes new drugs that inhibit HIV as well as its counterpart in monkeys, SIV, which made this study possible. Dr. Shlievert said, “My colleagues and I have previous done some studies that showed all microbes, including HIV, require host inflammation to cause disease, which the semen exosomes inhibit or stop, which made the idea of semen exosomes being the inhibitor the best option.” In this study, Dr. Shlievert has shown that semen exosomes block HIV-1 replication during many points of the cycle that the virus must go through.

HIV is one of the most commonly sexually transmitted disease and semen (or other bodily fluids such as blood) often plays the role of causing the infection. Since HIV has become a medical issue it has been extremely difficult to control. Antiretroviral therapy has been successful in helping to treat HIV, which is a step in the right direction, yet most other treatments to control the virus have not worked.

The HIV-1 virus replicates its genes in infected cells. If one of these genes is inhibited, it changes the replication process and the virus made will not be correctly replicated. Dr. Shlievert’s research team received the semen samples from the University of Iowa In Vitro Fertilization and Reproductive Testing laboratories. The donors from the clinic had no sexually transmitted disease history with HIV. The semen exosomes from the semen were extracted in Dr. Shlievert’s lab here at the University of Iowa. The team received the HIV-1 associated virus through the NIH AIDS Reagent Program and were kept in Eagle’s medium. HIV-1 virus was made by purification of supernatants from HIV-1 latently infected cells, per the study.

The findings from Dr. Shlievert’s study were on target with what they had hypothesized, that semen exosomes effect the Tat gene and that the Tat gene is the target of semen exosomes. Generally, this Tat gene controls most of what happens in the replication process. Since the semen exosomes are inhibiting the Tat gene it is making insufficient virus cells within three classes of HIV-1 virus transcripts, which was shown through RNA levels in the cells. Dr. Shlievert said, “The important take away from this result is that we are seeing exosomes interfere with replication which is causing a slowdown in the production of the virus.”

Racism in the Field of Medicine