Did Daisy Ever Love Tom 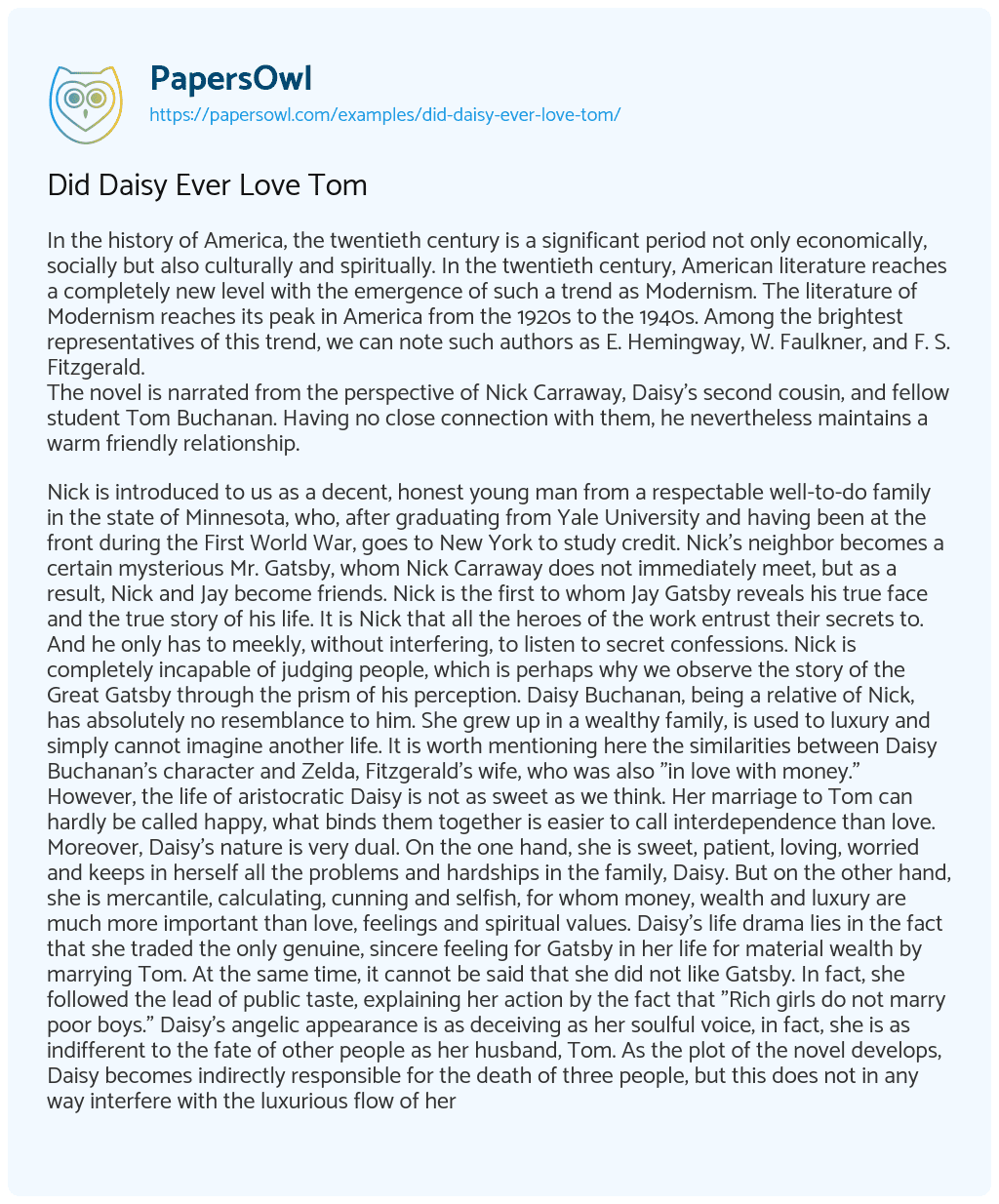 In the history of America, the twentieth century is a significant period not only economically, socially but also culturally and spiritually. In the twentieth century, American literature reaches a completely new level with the emergence of such a trend as Modernism. The literature of Modernism reaches its peak in America from the 1920s to the 1940s. Among the brightest representatives of this trend, we can note such authors as E. Hemingway, W. Faulkner, and F. S. Fitzgerald.
The novel is narrated from the perspective of Nick Carraway, Daisy’s second cousin, and fellow student Tom Buchanan. Having no close connection with them, he nevertheless maintains a warm friendly relationship.

Nick is introduced to us as a decent, honest young man from a respectable well-to-do family in the state of Minnesota, who, after graduating from Yale University and having been at the front during the First World War, goes to New York to study credit. Nick’s neighbor becomes a certain mysterious Mr. Gatsby, whom Nick Carraway does not immediately meet, but as a result, Nick and Jay become friends. Nick is the first to whom Jay Gatsby reveals his true face and the true story of his life. It is Nick that all the heroes of the work entrust their secrets to. And he only has to meekly, without interfering, to listen to secret confessions. Nick is completely incapable of judging people, which is perhaps why we observe the story of the Great Gatsby through the prism of his perception. Daisy Buchanan, being a relative of Nick, has absolutely no resemblance to him. She grew up in a wealthy family, is used to luxury and simply cannot imagine another life. It is worth mentioning here the similarities between Daisy Buchanan’s character and Zelda, Fitzgerald’s wife, who was also “in love with money.” However, the life of aristocratic Daisy is not as sweet as we think. Her marriage to Tom can hardly be called happy, what binds them together is easier to call interdependence than love. Moreover, Daisy’s nature is very dual. On the one hand, she is sweet, patient, loving, worried and keeps in herself all the problems and hardships in the family, Daisy. But on the other hand, she is mercantile, calculating, cunning and selfish, for whom money, wealth and luxury are much more important than love, feelings and spiritual values. Daisy’s life drama lies in the fact that she traded the only genuine, sincere feeling for Gatsby in her life for material wealth by marrying Tom. At the same time, it cannot be said that she did not like Gatsby. In fact, she followed the lead of public taste, explaining her action by the fact that “Rich girls do not marry poor boys.” Daisy’s angelic appearance is as deceiving as her soulful voice, in fact, she is as indifferent to the fate of other people as her husband, Tom. As the plot of the novel develops, Daisy becomes indirectly responsible for the death of three people, but this does not in any way interfere with the luxurious flow of her life.

Although Gatsby insisted that Daisy never loved Tom, Daisy admits that she loves both Tom and Gatsby. But after all, she was married off almost by force: according to the description, on the wedding day she had a nervous breakdown, she walked down the aisle almost without understanding what she was doing. Daisy has been living with her husband for several years, they have a little daughter and, of course, they have established a certain relationship.

Jay, however, rather strictly demanded that she abandon her usual way of life, including crossing out her past. These are not decisions that can be made quickly. But Gatsby was not up to this: he brought his life to the altar of happiness Daisy, although she did not ask for it, and demanded the same from her. Jay should have thought about the fact that past love could not be returned, and Daisy – that an extramarital affair with a man in love with him would have consequences.

Did Daisy Ever Love Tom. (2021, Jun 30). Retrieved from https://papersowl.com/examples/did-daisy-ever-love-tom/

Why do Tom and Daisy Stay Together?

Why does Tom Cheat on Daisy