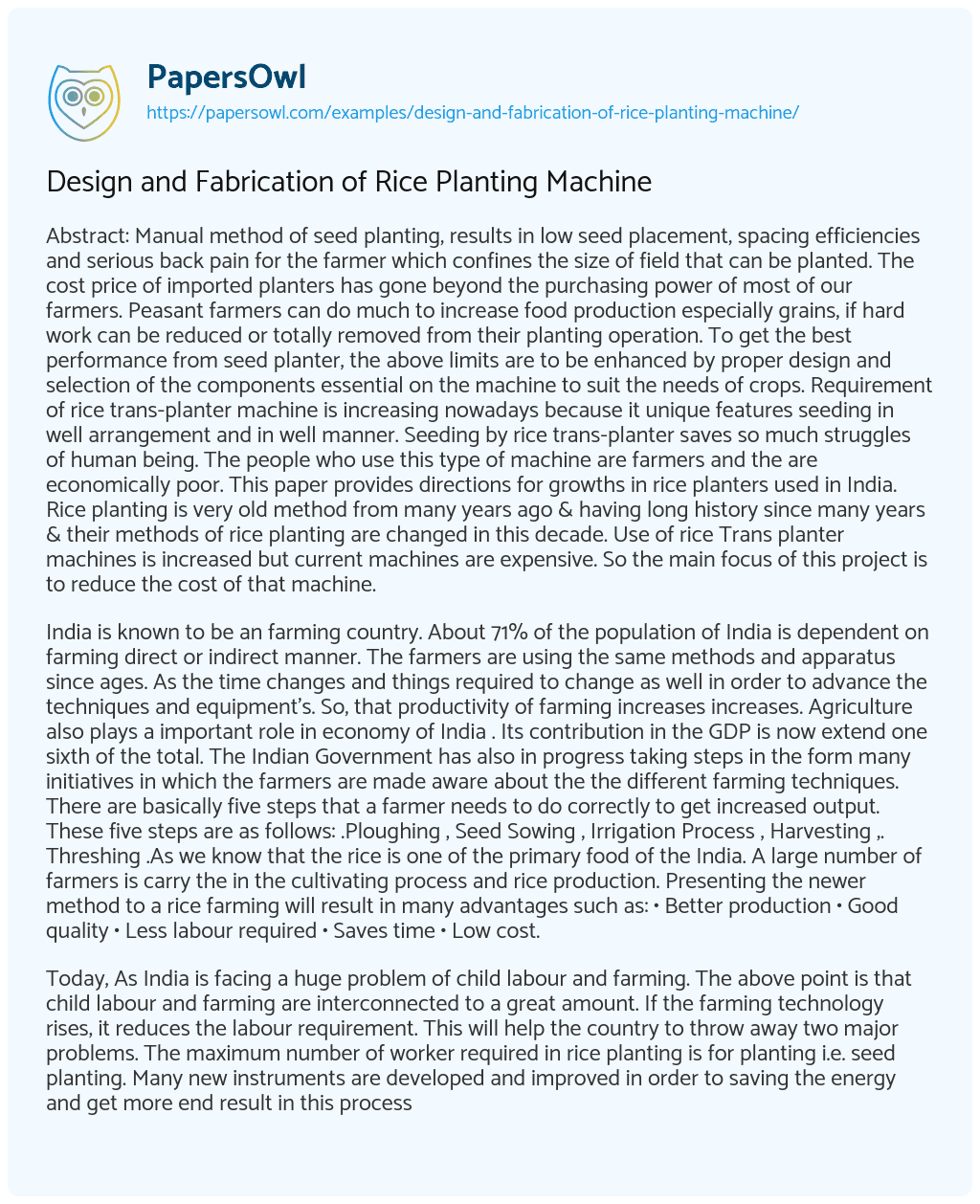 Abstract: Manual method of seed planting, results in low seed placement, spacing efficiencies and serious back pain for the farmer which confines the size of field that can be planted. The cost price of imported planters has gone beyond the purchasing power of most of our farmers. Peasant farmers can do much to increase food production especially grains, if hard work can be reduced or totally removed from their planting operation. To get the best performance from seed planter, the above limits are to be enhanced by proper design and selection of the components essential on the machine to suit the needs of crops. Requirement of rice trans-planter machine is increasing nowadays because it unique features seeding in well arrangement and in well manner. Seeding by rice trans-planter saves so much struggles of human being. The people who use this type of machine are farmers and the are economically poor. This paper provides directions for growths in rice planters used in India. Rice planting is very old method from many years ago & having long history since many years & their methods of rice planting are changed in this decade. Use of rice Trans planter machines is increased but current machines are expensive. So the main focus of this project is to reduce the cost of that machine.

India is known to be an farming country. About 71% of the population of India is dependent on farming direct or indirect manner. The farmers are using the same methods and apparatus since ages. As the time changes and things required to change as well in order to advance the techniques and equipment’s. So, that productivity of farming increases increases. Agriculture also plays a important role in economy of India . Its contribution in the GDP is now extend one sixth of the total. The Indian Government has also in progress taking steps in the form many initiatives in which the farmers are made aware about the the different farming techniques. There are basically five steps that a farmer needs to do correctly to get increased output. These five steps are as follows: .Ploughing , Seed Sowing , Irrigation Process , Harvesting ,. Threshing .As we know that the rice is one of the primary food of the India. A large number of farmers is carry the in the cultivating process and rice production. Presenting the newer method to a rice farming will result in many advantages such as: • Better production • Good quality • Less labour required • Saves time • Low cost.

Today, As India is facing a huge problem of child labour and farming. The above point is that child labour and farming are interconnected to a great amount. If the farming technology rises, it reduces the labour requirement. This will help the country to throw away two major problems. The maximum number of worker required in rice planting is for planting i.e. seed planting. Many new instruments are developed and improved in order to saving the energy and get more end result in this process. A rice planter is being developed countries like china, japan, etc. it is at present taken in use. But here in India the rice planter machine not economical to farmer due to high price. The rice planter in remote nation is run on diesel engine. The current situation of the Indian farmers is not well sufficient to purchase the planters to use it. So, a manual rice planter is being developed in India so reduce the cost of planter. In manual method of rice planting requires, 8-11labors are required for one acre planting. Though, if a automated rice planter is used, three people can transplant able to four acres in a day.

Rajvir Yadav et al. (2007) had accompanied an ergonomic valuation of six row manually operated rice planter. Under their study the field capability of planter was higher than as compared to manual method and average force required for pulling the planter was considered to be 131.32 N for male and 146.12 N for female subjects. Martin and Chaffin (1972), McDaniel (1974), and Chaffin et al. (1983) found that heights at which push-pull forces are applied are the most significant flexible which massively disturbs the force output.

During the period of 2008 A.K. Goel et al. conducted an research on three planters namely OUAT, CRRI and Yanji rice planter. Here they concluded that in accordance with the torn apart plot design of experiments 32 hours of sedimentation period was suitable for operation of manual planter while the same was 57 hours for Yanji planter. In 2013 Rampuram reddy & Dr. N. Sandhya Shenoy conducted an financial examination of Traditional SRI rice farming applies in Mahabubnagar district of Andra-Pradesh. It was concluded that the SRI method of farming is beneficial to the paddy farmers as associated to outdated method.

The various information regarding the rice planter taken from various research articles. The literature review is distributed into dissimilar field of examination like Ergo-Economical analysis of different paddy planting operation, performance of self-propelled rice planter and its effect on crop yield, theoretic growth of rice planting machine. This development and experiments were conducted which gives the parameters, specification, problems arising in already exists planter and progress& design procedure of planter. The unobtainability of the rice planter in western Maharashtra zone gave the reason to find proper research in this zone and designing planter. The lack of knowledge of use of this planter in the farmers which indications to makes the convenient use. The research and literature on the design analysis of hand cranked and self-propelled with the cam-follower mechanism.

As the method is manual the worker has to provide the initial motion. When the rice planter will move forward the ground wheels will get rotate. The wheels are provided with the fins so that they can travel easily in the mud. The ground wheels are used to keep constant distance between the two successive plants. Then we have larger sprocket is provided on the same shaft with the ground wheels and hence at the same time sprocket will also rotate.

Sprocket is in engagement with the smaller sprocket by using the chain drive. As the power will get transmitted to the smaller sprocket, it will rotate. Speed is increased from driver to driven shaft as we used 3:1 bar linkage so that it will oscillate for certain angle. As the drive is provided by the worker it will not have high speed and hence through this sprocket arrangement we have increase the planting finger speed. As the planting speed ratio. On the same shaft planting finger will be fixed through the four finger will oscillate, it will pick the rice plant from the tray and plant in mud. The planting finger is designed in such a way that rice plant should be easy to pick during the motion and also it should pick during the downward motion only.

Availability of rice planter are is in varied choice and verity of several things in the agriculture market. But those machine are very complex and has various part this increase price of machine. In addition some other parameter also provided which even planter machines. This parameters contains height adjuster of main wheel, depth adjuster of picking arm, additional power source to drive the wheel etc.

My Career Choice is Graphic Design

Food Menu and its Design