Communication in Kafka’s and Walker’s Stories 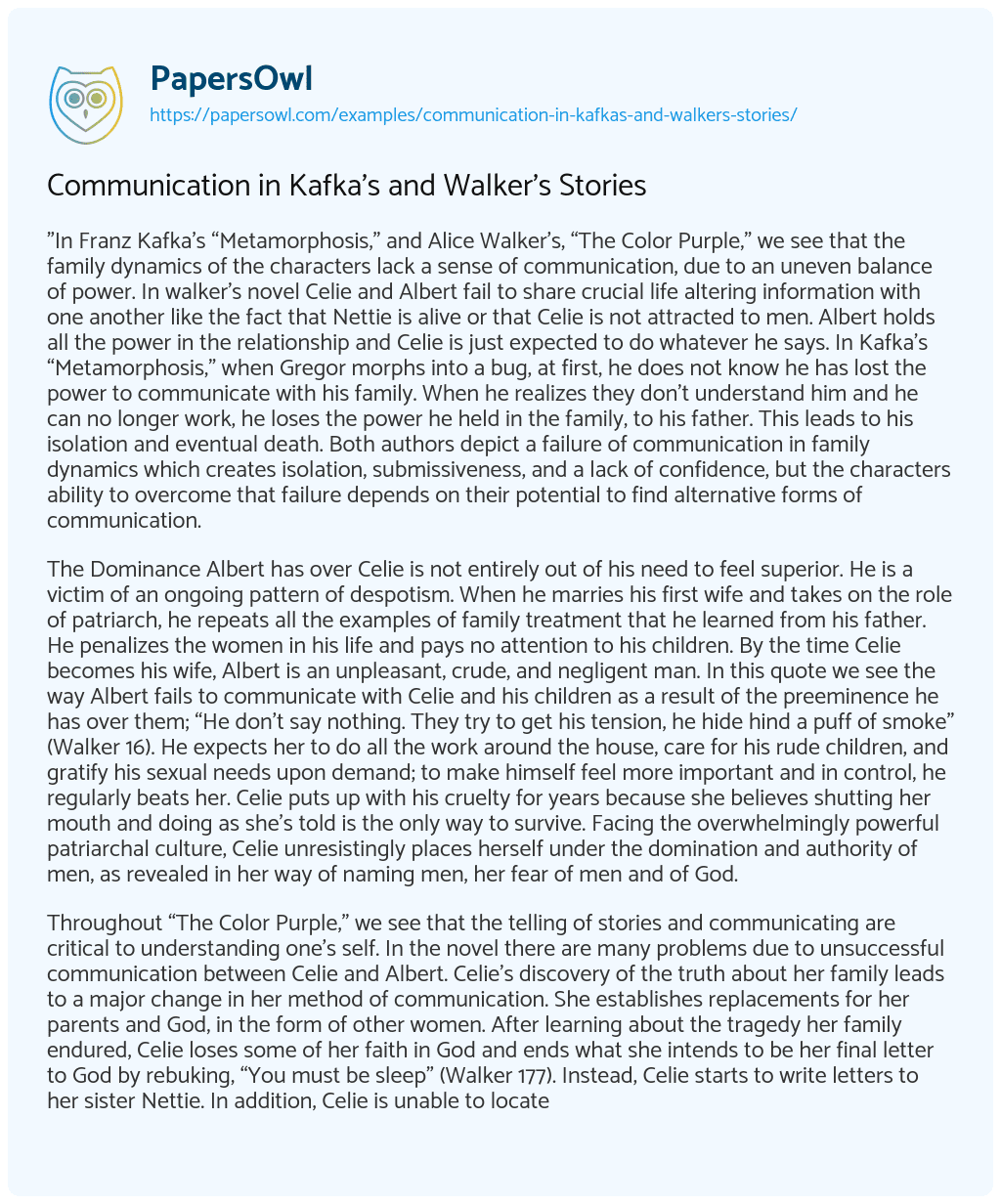 “In Franz Kafka’s “Metamorphosis,” and Alice Walker’s, “The Color Purple,” we see that the family dynamics of the characters lack a sense of communication, due to an uneven balance of power. In walker’s novel Celie and Albert fail to share crucial life altering information with one another like the fact that Nettie is alive or that Celie is not attracted to men. Albert holds all the power in the relationship and Celie is just expected to do whatever he says. In Kafka’s “Metamorphosis,” when Gregor morphs into a bug, at first, he does not know he has lost the power to communicate with his family. When he realizes they don’t understand him and he can no longer work, he loses the power he held in the family, to his father. This leads to his isolation and eventual death. Both authors depict a failure of communication in family dynamics which creates isolation, submissiveness, and a lack of confidence, but the characters ability to overcome that failure depends on their potential to find alternative forms of communication.

The Dominance Albert has over Celie is not entirely out of his need to feel superior. He is a victim of an ongoing pattern of despotism. When he marries his first wife and takes on the role of patriarch, he repeats all the examples of family treatment that he learned from his father. He penalizes the women in his life and pays no attention to his children. By the time Celie becomes his wife, Albert is an unpleasant, crude, and negligent man. In this quote we see the way Albert fails to communicate with Celie and his children as a result of the preeminence he has over them; “He don’t say nothing. They try to get his tension, he hide hind a puff of smoke” (Walker 16). He expects her to do all the work around the house, care for his rude children, and gratify his sexual needs upon demand; to make himself feel more important and in control, he regularly beats her. Celie puts up with his cruelty for years because she believes shutting her mouth and doing as she’s told is the only way to survive. Facing the overwhelmingly powerful patriarchal culture, Celie unresistingly places herself under the domination and authority of men, as revealed in her way of naming men, her fear of men and of God.

Throughout “The Color Purple,” we see that the telling of stories and communicating are critical to understanding one’s self. In the novel there are many problems due to unsuccessful communication between Celie and Albert. Celie’s discovery of the truth about her family leads to a major change in her method of communication. She establishes replacements for her parents and God, in the form of other women. After learning about the tragedy her family endured, Celie loses some of her faith in God and ends what she intends to be her final letter to God by rebuking, “You must be sleep” (Walker 177). Instead, Celie starts to write letters to her sister Nettie. In addition, Celie is unable to locate her parent’s graves, she seeks comfort and Shug tells Celie, “Us each other’s peoples now” (Walker 183). These powerful, surrogate connections that Celie builds with other women create a new family for her to help make up for her misfortunes. Celie stops doing what she deems necessary to survive and begins to search for peace and happiness in her own life.

It is sad to think of how much fear Celie had when it came to communication. Whether it was how she was feeling, something that she wanted, or a question she had, she hardly every communicated it. The reason she is so afraid is because of the Power Albert has over her. He is so dominant and abusive that she knows she must not communicate with him and share her feelings if she wants to remain alive. However, she does freely communicate with God in her”

Communication in Kafka’s and Walker’s Stories. (2021, Jun 05). Retrieved from https://papersowl.com/examples/communication-in-kafkas-and-walkers-stories/

Themes in the Color Purple by Alice Walker

“The Color Purple” by Alice Walker