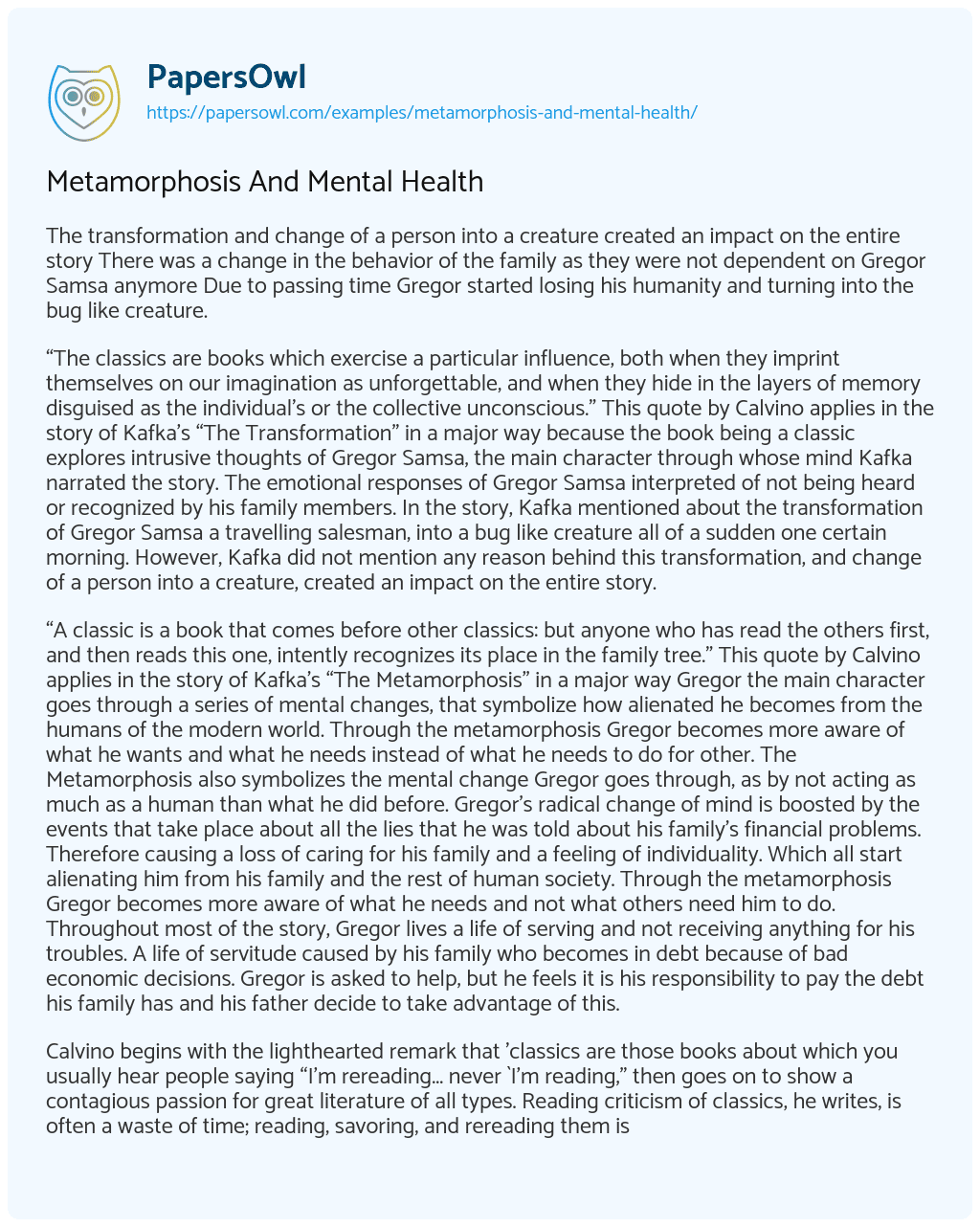 The transformation and change of a person into a creature created an impact on the entire story There was a change in the behavior of the family as they were not dependent on Gregor Samsa anymore Due to passing time Gregor started losing his humanity and turning into the bug like creature.

“The classics are books which exercise a particular influence, both when they imprint themselves on our imagination as unforgettable, and when they hide in the layers of memory disguised as the individual’s or the collective unconscious.” This quote by Calvino applies in the story of Kafka’s “The Transformation” in a major way because the book being a classic explores intrusive thoughts of Gregor Samsa, the main character through whose mind Kafka narrated the story. The emotional responses of Gregor Samsa interpreted of not being heard or recognized by his family members. In the story, Kafka mentioned about the transformation of Gregor Samsa a travelling salesman, into a bug like creature all of a sudden one certain morning. However, Kafka did not mention any reason behind this transformation, and change of a person into a creature, created an impact on the entire story.

“A classic is a book that comes before other classics: but anyone who has read the others first, and then reads this one, intently recognizes its place in the family tree.” This quote by Calvino applies in the story of Kafka’s “The Metamorphosis” in a major way Gregor the main character goes through a series of mental changes, that symbolize how alienated he becomes from the humans of the modern world. Through the metamorphosis Gregor becomes more aware of what he wants and what he needs instead of what he needs to do for other. The Metamorphosis also symbolizes the mental change Gregor goes through, as by not acting as much as a human than what he did before. Gregor’s radical change of mind is boosted by the events that take place about all the lies that he was told about his family’s financial problems. Therefore causing a loss of caring for his family and a feeling of individuality. Which all start alienating him from his family and the rest of human society. Through the metamorphosis Gregor becomes more aware of what he needs and not what others need him to do. Throughout most of the story, Gregor lives a life of serving and not receiving anything for his troubles. A life of servitude caused by his family who becomes in debt because of bad economic decisions. Gregor is asked to help, but he feels it is his responsibility to pay the debt his family has and his father decide to take advantage of this.

Calvino begins with the lighthearted remark that ‘classics are those books about which you usually hear people saying “I’m rereading… never `I’m reading,” then goes on to show a contagious passion for great literature of all types. Reading criticism of classics, he writes, is often a waste of time; reading, savoring, and rereading them is of much greater importance. while Grete’s position within the family improves, her relationship with Gregor deteriorates. Prior to morphing into an insect, Gregor had a close relationship with his sister he wanted to send her to the Conservatory so she could learn music. Indeed, Grete likely brings Gregor food because she has fond memories of her brother. But despite her compassion, Gregor does not seem to accept his sister has grown up, mentally.

All these factors that caused him to become a bug, had ultimately been his choice, as it was he that decided to make his family a priority, allowing them to influence him to become anisect. Kafka intentionally made it clear that it was Gregor’s choice to become an insect, and on one else’s. Gregor’s man-to-insect conversion was the best thing that could happen to the Samsa family. Once dispirited and listless, they could now enjoy walks in the park and look forward to a new home. Although some may argue that Kafka’s story is horrific, it merely illustrates one must ‘go through hell to get to heaven”. Gregor’s situation, while tragic, makes the Samsa family stronger.

Analysis of the Novel the Metamorphosis