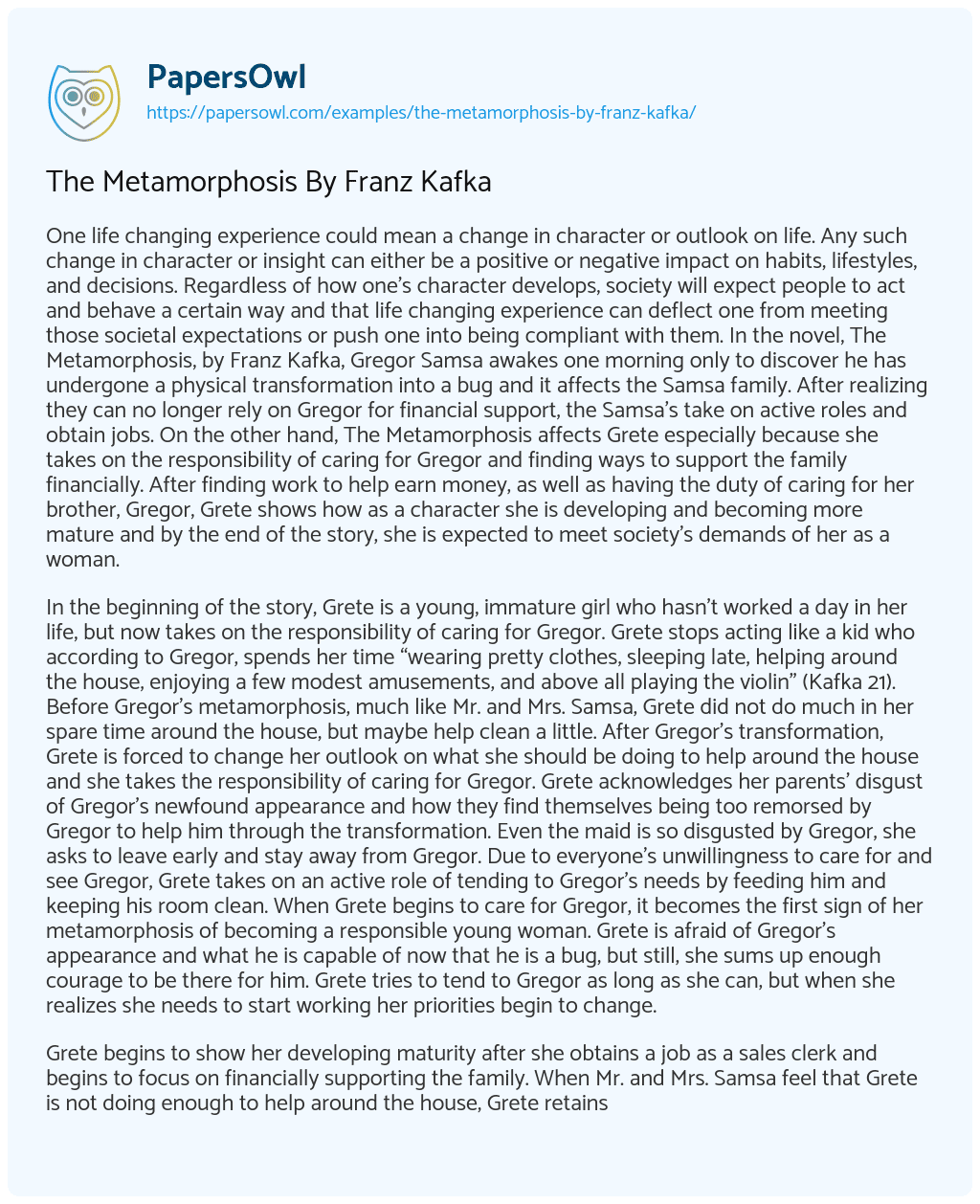 One life changing experience could mean a change in character or outlook on life. Any such change in character or insight can either be a positive or negative impact on habits, lifestyles, and decisions. Regardless of how one’s character develops, society will expect people to act and behave a certain way and that life changing experience can deflect one from meeting those societal expectations or push one into being compliant with them. In the novel, The Metamorphosis, by Franz Kafka, Gregor Samsa awakes one morning only to discover he has undergone a physical transformation into a bug and it affects the Samsa family. After realizing they can no longer rely on Gregor for financial support, the Samsa’s take on active roles and obtain jobs. On the other hand, The Metamorphosis affects Grete especially because she takes on the responsibility of caring for Gregor and finding ways to support the family financially. After finding work to help earn money, as well as having the duty of caring for her brother, Gregor, Grete shows how as a character she is developing and becoming more mature and by the end of the story, she is expected to meet society’s demands of her as a woman.

In the beginning of the story, Grete is a young, immature girl who hasn’t worked a day in her life, but now takes on the responsibility of caring for Gregor. Grete stops acting like a kid who according to Gregor, spends her time “wearing pretty clothes, sleeping late, helping around the house, enjoying a few modest amusements, and above all playing the violin” (Kafka 21). Before Gregor’s metamorphosis, much like Mr. and Mrs. Samsa, Grete did not do much in her spare time around the house, but maybe help clean a little. After Gregor’s transformation, Grete is forced to change her outlook on what she should be doing to help around the house and she takes the responsibility of caring for Gregor. Grete acknowledges her parents’ disgust of Gregor’s newfound appearance and how they find themselves being too remorsed by Gregor to help him through the transformation. Even the maid is so disgusted by Gregor, she asks to leave early and stay away from Gregor. Due to everyone’s unwillingness to care for and see Gregor, Grete takes on an active role of tending to Gregor’s needs by feeding him and keeping his room clean. When Grete begins to care for Gregor, it becomes the first sign of her metamorphosis of becoming a responsible young woman. Grete is afraid of Gregor’s appearance and what he is capable of now that he is a bug, but still, she sums up enough courage to be there for him. Grete tries to tend to Gregor as long as she can, but when she realizes she needs to start working her priorities begin to change.

Grete begins to show her developing maturity after she obtains a job as a sales clerk and begins to focus on financially supporting the family. When Mr. and Mrs. Samsa feel that Grete is not doing enough to help around the house, Grete retains the mindset of remaining focused on working instead of only taking care of Gregor. After Grete obtains a job as a sales clerk, she feeds Gregor and cleans up after him less and less over time. Grete realizes there are bigger responsibilities to worry about; such as taking care of Mrs. Samsa, working, and accommodating the needs of the Boarders. Grete assumes these are the responsibilities she should concentrate on as a grown woman and an active member of the family. Grete eventually resents her role of caring for Gregor. Grete loses her love and concern for ‘Gregor-the-bug’ seeing how he does not do much to put the family at ease in their situation. Vexation toward Gregor only grew with the Boarders living in the house as the Samsa family then realize they must conceal him. Although, Gregor still cares for the family and lives in the hopes of maintaining a functioning relationship with them in the future. When Grete works to entertain the Boarders with her violin one evening and Gregor comes out of his room and scares the Boarders off, Grete feels she had her last straw with Gregor. Grete suggests to her father after the violin fiasco, “We must try to get rid of it. We’ve tried to look after it and to put up with it as far as is humanly possible, and I don’t think anyone could reproach us in the slightest” (Kafka 45). Grete feels that Gregor has messed up another good thing the family had going for them. Grete already felt that she and her parents were on their own with financial support, but after the violin incident, Grete realized she lost her brother a long time ago. Grete, now aggravated with the ‘pest’ living in her home, wants to take control of her life and her family’s situation by suggesting to her father that they get rid of Gregor once and for all. Through the initiative of Grete’s suggestion, Grete shows she is evolving into a strong, independent woman trying to take control of the situation and make the best out of her struggles, especially in the Gregor situation.

Towards the end of the story, Mrs. And Mr. Samsa acknowledge how Grete has grown into a beautiful young adult through the metamorphosis journey she endured with Gregor and they retain the expectation that as an adult and woman, she must begin looking for a husband. “Growing quieter and communicating almost unconsciously through glances, [Mr. and Mrs. Samsa] thought that it would soon be time, too, to find her a good husband. And it was like a confirmation of their new dreams and good intentions when at the end of the ride their daughter got up first and stretched her young body” (Kafka 58). Grete endures the struggle of having her brother, Gregor, turn into a bug of which affects the mentality and responsibilities of the entire family. The metamorphosis of Gregor into a vermin allows Grete to obtain responsibilities allowing her to prioritize what she needs to focus on and mature herself. As now a mature woman, Grete will be expected by those around her to follow societal expectations for women. Grete lives in a society where people believe in the concept of the woman staying at home to cook and clean, while the man of the house goes to work to bring in income. Mrs. and Mr. Samsa want to ease their financial issues through Grete. Their hopes lie in Grete finding a prosperous husband who can support her and help Mrs. and Mr. Samsa out with their financial issues.

By the end of the story, all it took was Gregor’s life-changing incident of becoming a bug to change Grete’s life. After finding work to help earn money, as well as having the duty of caring for her brother, Gregor, Grete shows how as a character she is developing and becoming more mature and by the end of the story, she is expected to meet society’s demands of her as a woman. It is clear after Gregor’s transformation into a bug, Grete transformed into a young responsible adult with her own responsibilities to handle. Grete tries to tend to Gregor as long as she can, but when she realizes she needs to start working her priorities begin to change as she begins to focus on financially supporting the family. After Grete has grown into a beautiful young adult, she is expected to follow societal expectations of her as a woman and an active member of her family. Throughout all Grete has endured, she maintains strength throughout her horrifying experience with Gregor which says a lot about her character. Grete’s role in Kafka’s story was significant because the society of Kafka’s time did not value or see the importance behind a woman’s role in society. Kafka emphasizes the importance of a woman’s role in specifically a family. Men are often perceived to be the breadwinners in the family; who are the main support system and backbone for everyone else who is the opposite sex. Although, by taking out the male breadwinner in the family (Which Kafka achieves by creating an extensive metaphor of turning Gregor into a bug), the readers will see how important a woman can be in supporting the family as well.

The Metamorphosis By Franz Kafka. (2022, Jun 20). Retrieved from https://papersowl.com/examples/the-metamorphosis-by-franz-kafka/