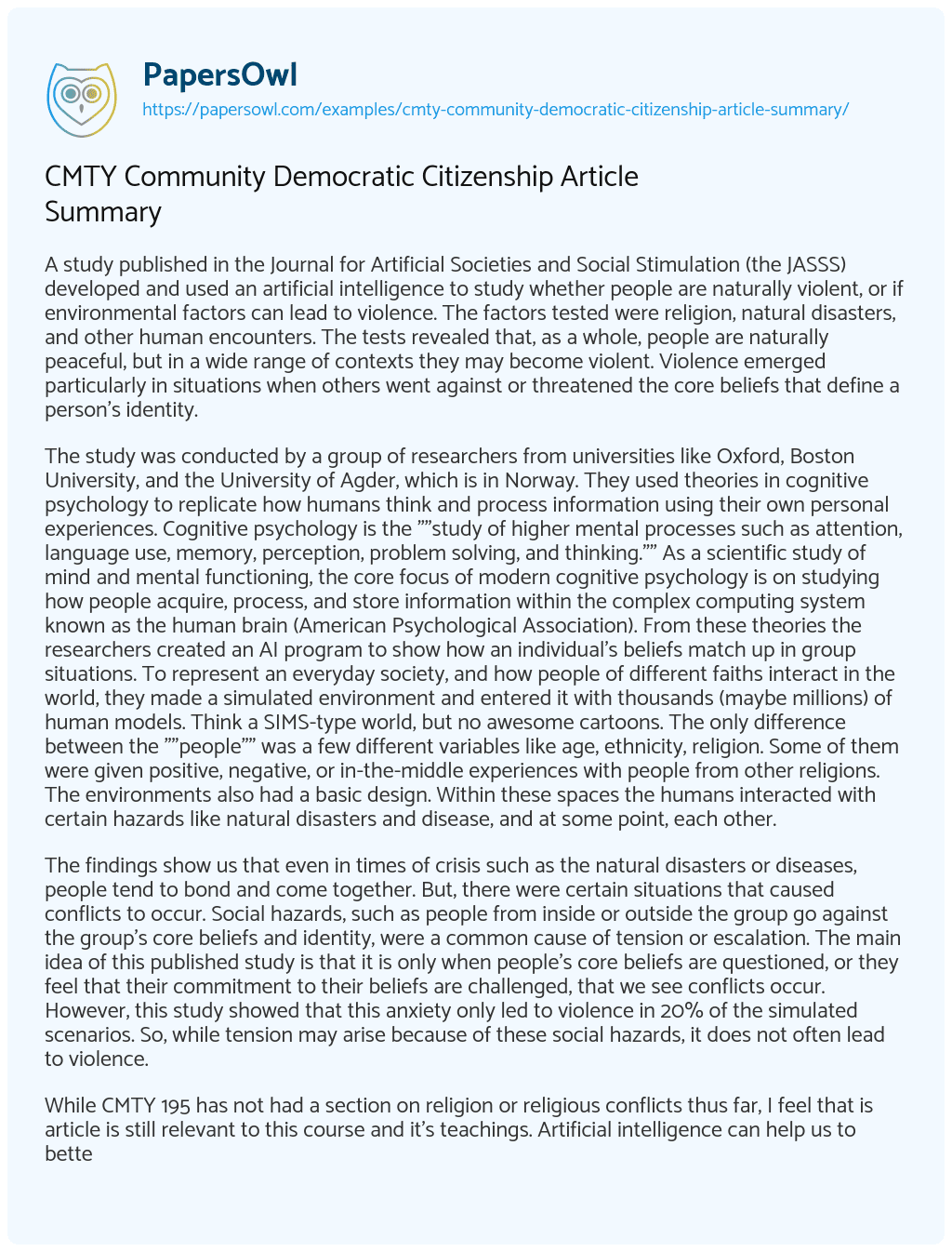 A study published in the Journal for Artificial Societies and Social Stimulation (the JASSS) developed and used an artificial intelligence to study whether people are naturally violent, or if environmental factors can lead to violence. The factors tested were religion, natural disasters, and other human encounters. The tests revealed that, as a whole, people are naturally peaceful, but in a wide range of contexts they may become violent. Violence emerged particularly in situations when others went against or threatened the core beliefs that define a person’s identity.

The study was conducted by a group of researchers from universities like Oxford, Boston University, and the University of Agder, which is in Norway. They used theories in cognitive psychology to replicate how humans think and process information using their own personal experiences. Cognitive psychology is the “”study of higher mental processes such as attention, language use, memory, perception, problem solving, and thinking.”” As a scientific study of mind and mental functioning, the core focus of modern cognitive psychology is on studying how people acquire, process, and store information within the complex computing system known as the human brain (American Psychological Association). From these theories the researchers created an AI program to show how an individual’s beliefs match up in group situations. To represent an everyday society, and how people of different faiths interact in the world, they made a simulated environment and entered it with thousands (maybe millions) of human models. Think a SIMS-type world, but no awesome cartoons. The only difference between the “”people”” was a few different variables like age, ethnicity, religion. Some of them were given positive, negative, or in-the-middle experiences with people from other religions. The environments also had a basic design. Within these spaces the humans interacted with certain hazards like natural disasters and disease, and at some point, each other.

The findings show us that even in times of crisis such as the natural disasters or diseases, people tend to bond and come together. But, there were certain situations that caused conflicts to occur. Social hazards, such as people from inside or outside the group go against the group’s core beliefs and identity, were a common cause of tension or escalation. The main idea of this published study is that it is only when people’s core beliefs are questioned, or they feel that their commitment to their beliefs are challenged, that we see conflicts occur. However, this study showed that this anxiety only led to violence in 20% of the simulated scenarios. So, while tension may arise because of these social hazards, it does not often lead to violence.

While CMTY 195 has not had a section on religion or religious conflicts thus far, I feel that is article is still relevant to this course and it’s teachings. Artificial intelligence can help us to better understand the causes of religious violence and to possibly control it. This study is one of the first that uses AI with a realistic human psychology. This research can be a positive tool that supports integration of multicultural societies. Throughout this class so far, we have read about increased diversity in America (Week 7), emerging megacities and their problems (Week 5), feminist issues (Week 11), and many other issues that I feel tie in to this article. I feel a sectio about religion and religious anxieties would tie in perfectly in a class about community and citizenship in a democratic society. It is a very important problem that has caused so many conflicts, violent and non-violent.

With this ability to mimic human psychology, and the future hopes of understanding and controlling religious conflict, continuing this kind of research can help bring peace and cohesiveness to our local, state, national, and global communities. With all of the issues and conflicts we have learned about in CMTY 195 and that we hear about everyday in the news, this simulation showed that we are not inherently violent people. There may be some hope for us yet!