Classism and Racism in Reading the Bible from the Margins 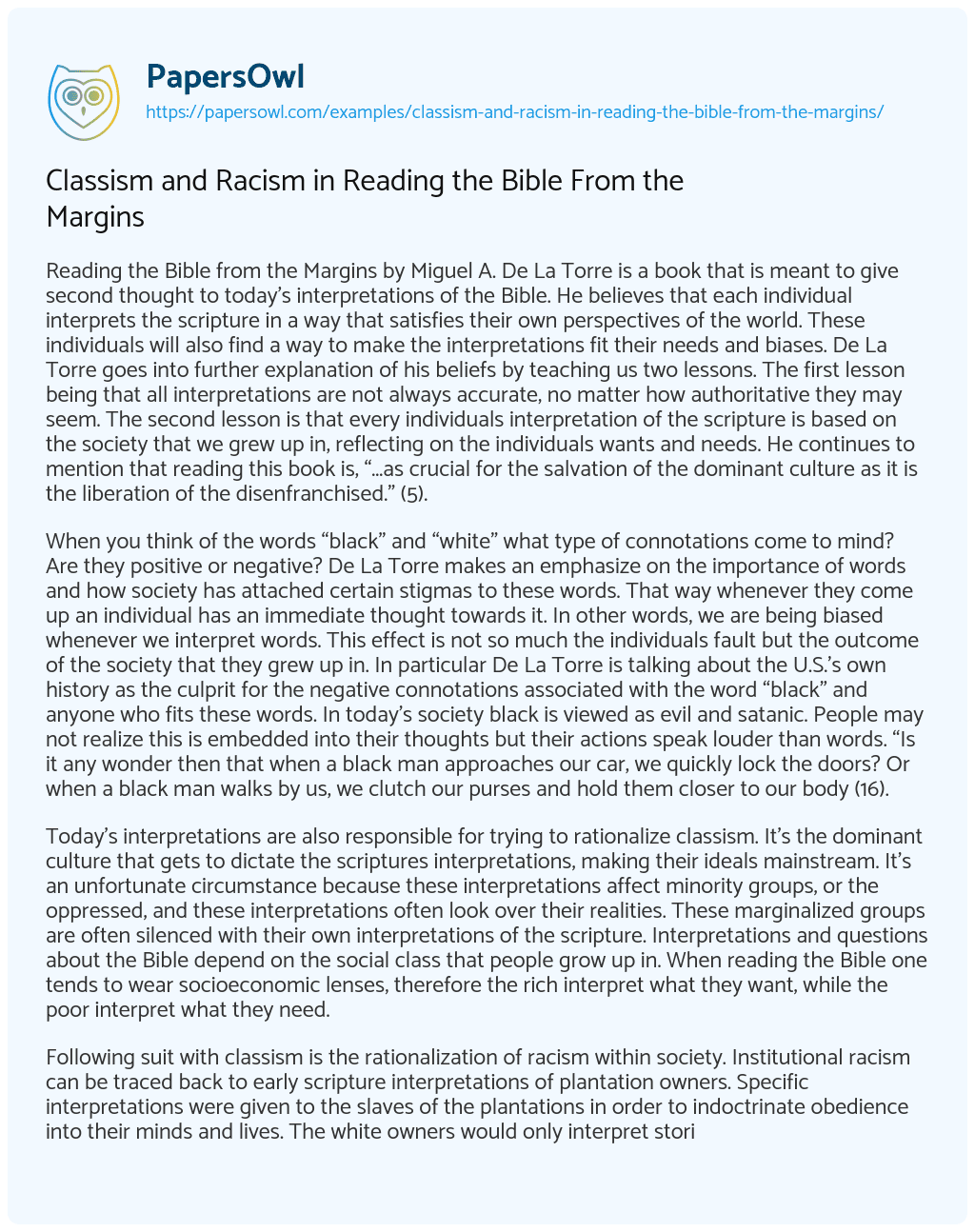 Reading the Bible from the Margins by Miguel A. De La Torre is a book that is meant to give second thought to today’s interpretations of the Bible. He believes that each individual interprets the scripture in a way that satisfies their own perspectives of the world. These individuals will also find a way to make the interpretations fit their needs and biases. De La Torre goes into further explanation of his beliefs by teaching us two lessons. The first lesson being that all interpretations are not always accurate, no matter how authoritative they may seem. The second lesson is that every individuals interpretation of the scripture is based on the society that we grew up in, reflecting on the individuals wants and needs. He continues to mention that reading this book is, “…as crucial for the salvation of the dominant culture as it is the liberation of the disenfranchised.” (5).

When you think of the words “black” and “white” what type of connotations come to mind? Are they positive or negative? De La Torre makes an emphasize on the importance of words and how society has attached certain stigmas to these words. That way whenever they come up an individual has an immediate thought towards it. In other words, we are being biased whenever we interpret words. This effect is not so much the individuals fault but the outcome of the society that they grew up in. In particular De La Torre is talking about the U.S.’s own history as the culprit for the negative connotations associated with the word “black” and anyone who fits these words. In today’s society black is viewed as evil and satanic. People may not realize this is embedded into their thoughts but their actions speak louder than words. “Is it any wonder then that when a black man approaches our car, we quickly lock the doors? Or when a black man walks by us, we clutch our purses and hold them closer to our body (16).

Following suit with classism is the rationalization of racism within society. Institutional racism can be traced back to early scripture interpretations of plantation owners. Specific interpretations were given to the slaves of the plantations in order to indoctrinate obedience into their minds and lives. The white owners would only interpret stories of obedience to their slaves instead of stories of equality. De La Torre goes on to mention that these interpretations of Christian scriptures go beyond the United States and has affected other continents like Asia and Africa. These populations view Christianity as a form of “Western domination” (66) rather than a religious or spiritual service. An old African proverb said, “At first the Europeans had the Bible and we had the land; now the Europeans have the land and we have the Bible” (66).

There’s another minority group that is being affected by biased interpretations, women. On top of racism and classism certain individuals interpretations have justified sexism in society. De La Torre says that many have interpreted Genesis 3:16, “To the woman [God] said, ‘I will greatly increase your sorrow in your childbearing..” (83) as God’s curse on women but how it should really be interpreted is as a lesson as what will happen when a human commits sin. In Genesis 2:18 it is said that a woman should serve as a “helper” (85) to man. This interpretation of the word “ezer” has given the connotation that women are subordinates to men and this is their punishment for eating the forbidden mango, or apple. These interpretations have come from many male scholars but female scholars have a different interpretation to these verses. Some female scholars believe that the word ezer should be translated to “companion” rather than “helper” (85). By changing only one word the interpretations, or meaning, of the verse takes on to a different light. One that sees women as more of a counterpart to man than a subordinate.

The way Jesus is imagined also depends on the person and their socioeconomic perspective. More often than not the Jesus image portrayed by society is that of a Jesus with blue eyes and light skin. For those who are not part of the dominant culture see Jesus in a different way, with different colored eyes, and skin. In fact; men, women, Hispanics, Blacks, and even the homeless have their own version of Jesus. Why then is the common image of Jesus a blue eyed, white Jesus? De La Torre mentions that the purpose of this specific image is for those of the dominant culture to stay in power and keep their privilege. They butcher the image of Jesus to reflect themselves in order to remain superior in society.

De La Torre proceeds by telling his readers that the only way we can all get along is by being aware of what is happening within our society. He says that those with privilege cannot simply turn a blind eye to the injustices of the world. That they cannot only come up with interpretations that will benefit them more, while the marginalized are forgotten. De La Torre gives an example of the LA riots that occurred after the officers that beat Rodney King were acquitted. “As long as the nation’s sins of racism, classism, and sexism continue to remain masked, then no, we cannot get along” (152).

De La Torre ends his book by saying that the Bible was meant for those who are in need, for those who are oppressed. He persuades his audience to read between the margins and understand the deeper meaning of the Bible instead of following these generalized interpretations. Only then can society begin to have a discussion about which interpretations benefit the human race as a whole. Only when we can get past are differences will we be truly liberated.

There was a part in De La Torre’s Reading the Bible from the Margins that really struck a similarity to Powell’s Introducing the New Testament. Powell had mentioned that Luke’s Gospel was written in a way that was meant to include people from all sorts of backgrounds and that it was especially written for those in need or oppressed. Much of De La Torre’s book was about how the oppressed, or marginalized, are being silenced and forgotten. He goes on to mention that the only way we can finally get along is when the dominant culture finally decides to hear out the minority groups and work together for a better future for everyone. De La Torre’s book really reminds me of the Gospel of Luke, he sticks up for the little people and wants the Bible interpreted in a way that makes it easy for everyone to understand. Reading the Bible from the Margins really helped me understand the concept Luke’s Gospel was trying to get across. In a world where everyone has their own specific interpretation of the scripture it is important that we all band together, acknowledge our sorrows, and remove the injustices of the world. We are all fighting each other on what the correct interpretations of the Bible are instead of trying to truly understand it.

An aspect of the writing that I find particularly troubling is the harsh outlook the author has on the Caucasian race. Because of history I know that the Europeans have caused many problems and much grief throughout the centuries. A lot of this was done due to greed, whether it be for earthly goods or power. However, I don’t think “white people” are solely to blame. There are many other races or ethnic backgrounds that are not apart of the dominant culture and yet participate with classism, racism, and sexism everyday. I understand De La Torre mainly used Europeans as the prime example of causing injustice in the world but I would have liked if he had added other perspectives to the cause of this problem. Other than that this book has been an incredible read and I agreed with 99% of it. Our perception is our reality.

Classism and Racism in Reading the Bible From the Margins. (2022, Apr 11). Retrieved from https://papersowl.com/examples/classism-and-racism-in-reading-the-bible-from-the-margins/

The Comparison of the Holy Bible the Dao De Jing

The Bible and the Power of the Mind

Historical Value of the Bible

The Good Samaritan in the Bible