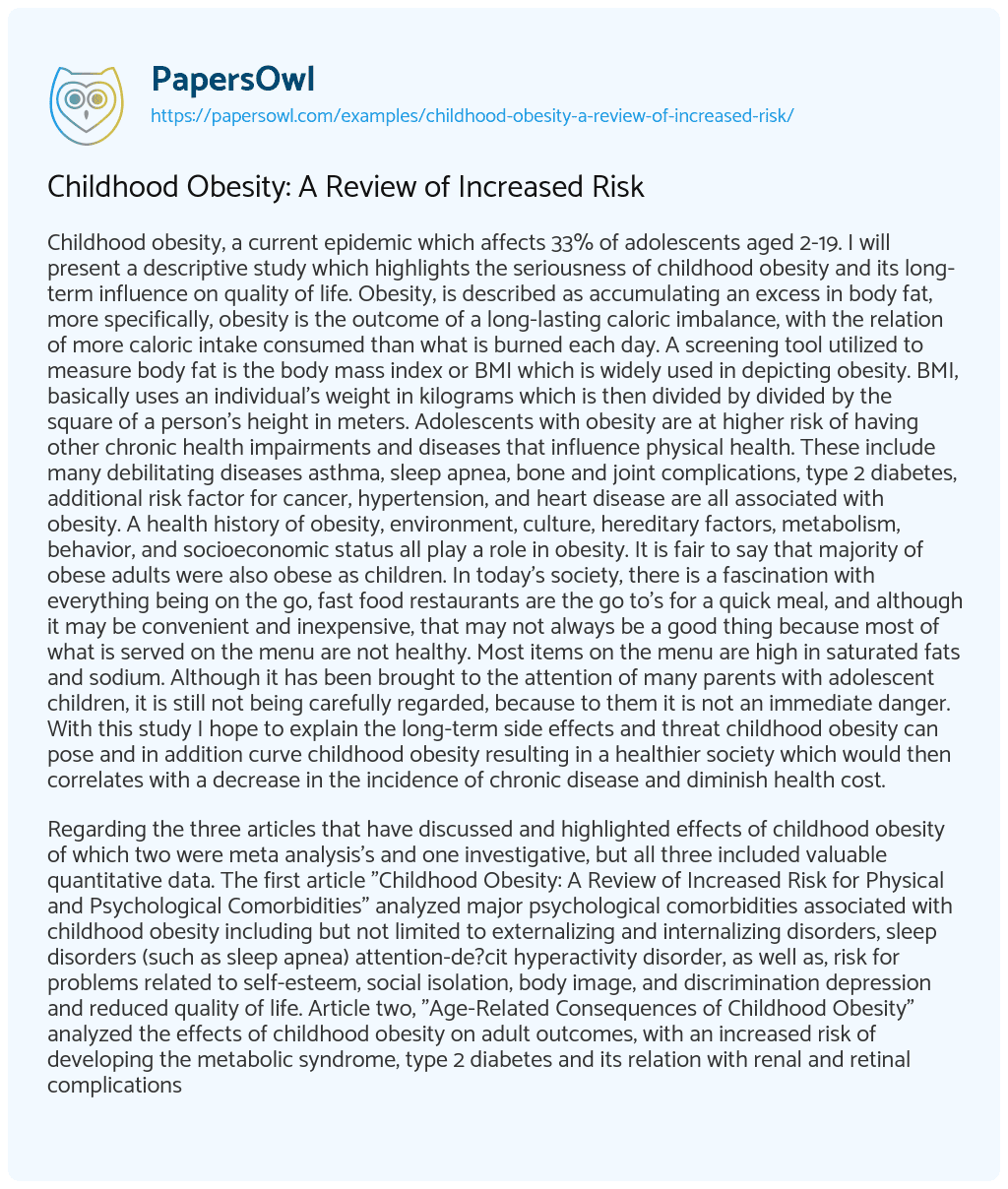 Childhood obesity, a current epidemic which affects 33% of adolescents aged 2-19. I will present a descriptive study which highlights the seriousness of childhood obesity and its long-term influence on quality of life. Obesity, is described as accumulating an excess in body fat, more specifically, obesity is the outcome of a long-lasting caloric imbalance, with the relation of more caloric intake consumed than what is burned each day. A screening tool utilized to measure body fat is the body mass index or BMI which is widely used in depicting obesity. BMI, basically uses an individual’s weight in kilograms which is then divided by divided by the square of a person’s height in meters. Adolescents with obesity are at higher risk of having other chronic health impairments and diseases that influence physical health. These include many debilitating diseases asthma, sleep apnea, bone and joint complications, type 2 diabetes, additional risk factor for cancer, hypertension, and heart disease are all associated with obesity. A health history of obesity, environment, culture, hereditary factors, metabolism, behavior, and socioeconomic status all play a role in obesity. It is fair to say that majority of obese adults were also obese as children. In today’s society, there is a fascination with everything being on the go, fast food restaurants are the go to’s for a quick meal, and although it may be convenient and inexpensive, that may not always be a good thing because most of what is served on the menu are not healthy. Most items on the menu are high in saturated fats and sodium. Although it has been brought to the attention of many parents with adolescent children, it is still not being carefully regarded, because to them it is not an immediate danger. With this study I hope to explain the long-term side effects and threat childhood obesity can pose and in addition curve childhood obesity resulting in a healthier society which would then correlates with a decrease in the incidence of chronic disease and diminish health cost.

Regarding the three articles that have discussed and highlighted effects of childhood obesity of which two were meta analysis’s and one investigative, but all three included valuable quantitative data. The first article “Childhood Obesity: A Review of Increased Risk for Physical and Psychological Comorbidities” analyzed major psychological comorbidities associated with childhood obesity including but not limited to externalizing and internalizing disorders, sleep disorders (such as sleep apnea) attention-de?cit hyperactivity disorder, as well as, risk for problems related to self-esteem, social isolation, body image, and discrimination depression and reduced quality of life. Article two, “Age-Related Consequences of Childhood Obesity” analyzed the effects of childhood obesity on adult outcomes, with an increased risk of developing the metabolic syndrome, type 2 diabetes and its relation with renal and retinal complications , cardiovascular disease, polycystic ovarian syndrome (POS) nonalcoholic fatty liver disease, psychiatric disease, obstructive sleep apnea, infertility, orthopedic complications, asthma and add to the growing rates of cancer, among others. Finally, article three “Childhood obesity: the impact on long-term risk of metabolic and CVD is not necessarily inevitable” investigates the longstanding inferences of childhood obesity for cardiovascular and metabolic health, with the focus on the stand alone influence of childhood obesity. Basically, article three stance was that there was not enough evidence to suggest that childhood obesity is a single risk factor for metabolic and cardiovascular risk during adulthood.

The relationship of the first two articles is the fact that childhood obesity can lead to long term effects lasting into adulthood while article three heads in a opposite direction where childhood obesity can’t be single handedly responsible for/or can lead to long term diseases such as cardiovascular diseases. Results of the first two articles have shown that there is a steady incline of childhood obesity along with its negative contributions to long term health effects that leads into adulthood. Article three being on the opposite end, again suggest that the data that was reviewed provided little indication to say that “childhood obesity is an independent risk factor for metabolic and cardiovascular risk during adulthood, and that which does exist should be considered weak”.

In my opinion, I completely agree with the first to articles and the information presented between them, seeing it firsthand at home and in the hospital setting, which brings me to application of the study into clinical practice. It is important to be competent on epidemic factors, that way appropriate care and be rendered. It is also important as a nurse to be educated on childhood obesity, because of the fact that this a growing concern, if a nurse is properly educated he/she can then confidently educate their client should they come across a parent with an obese child that is their patient or even a family member of an obese child, the nurse can make good recommendations, it’s always important to be educated so that you can educate others.

Childhood Obesity, a Crisis that could be Cure