Childhood Obesity, a Crisis that could be Cure 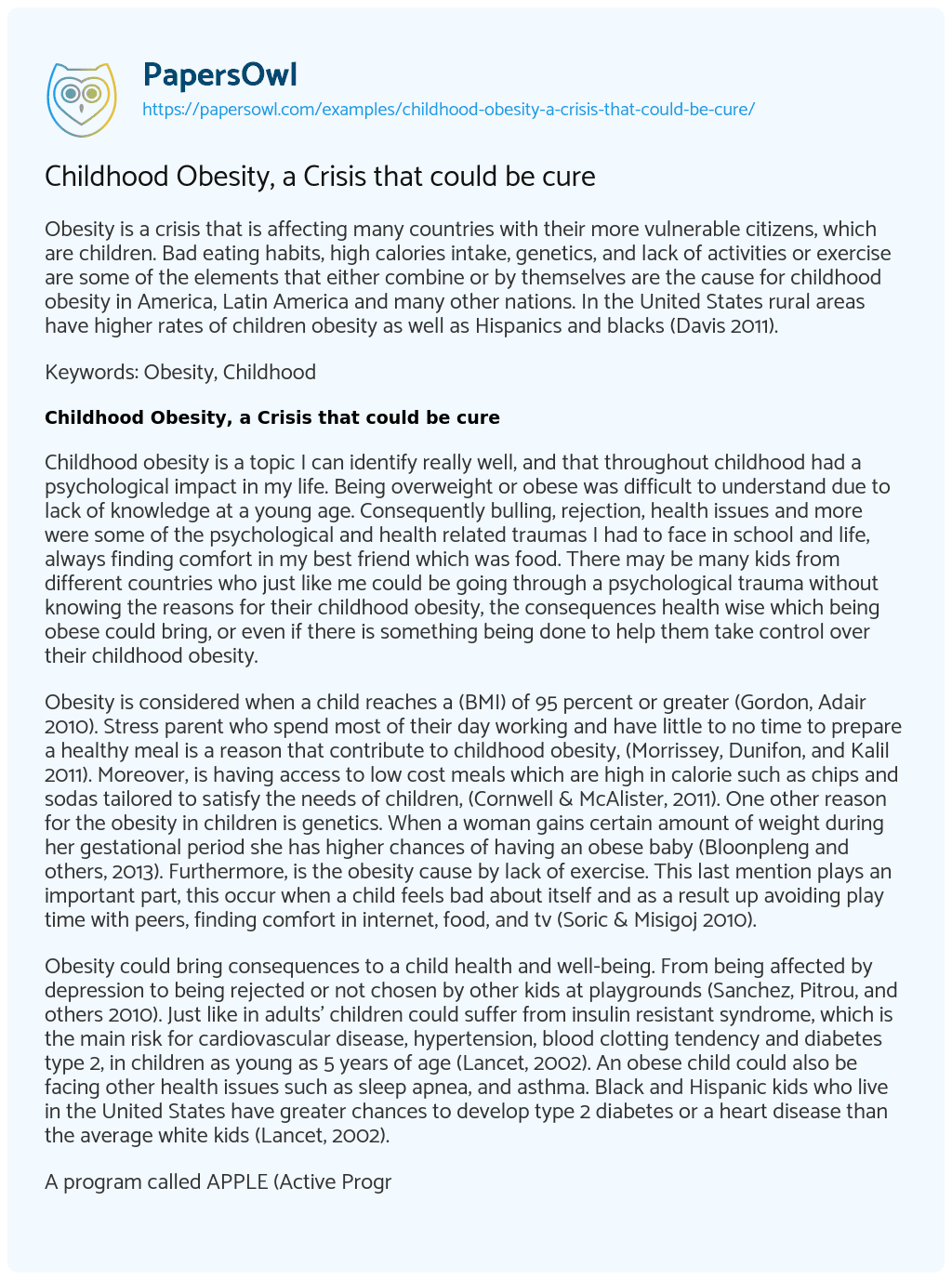 Obesity is a crisis that is affecting many countries with their more vulnerable citizens, which are children. Bad eating habits, high calories intake, genetics, and lack of activities or exercise are some of the elements that either combine or by themselves are the cause for childhood obesity in America, Latin America and many other nations. In the United States rural areas have higher rates of children obesity as well as Hispanics and blacks (Davis 2011).

Childhood Obesity, a Crisis that could be cure

Childhood obesity is a topic I can identify really well, and that throughout childhood had a psychological impact in my life. Being overweight or obese was difficult to understand due to lack of knowledge at a young age. Consequently bulling, rejection, health issues and more were some of the psychological and health related traumas I had to face in school and life, always finding comfort in my best friend which was food. There may be many kids from different countries who just like me could be going through a psychological trauma without knowing the reasons for their childhood obesity, the consequences health wise which being obese could bring, or even if there is something being done to help them take control over their childhood obesity.

Obesity is considered when a child reaches a (BMI) of 95 percent or greater (Gordon, Adair 2010). Stress parent who spend most of their day working and have little to no time to prepare a healthy meal is a reason that contribute to childhood obesity, (Morrissey, Dunifon, and Kalil 2011). Moreover, is having access to low cost meals which are high in calorie such as chips and sodas tailored to satisfy the needs of children, (Cornwell & McAlister, 2011). One other reason for the obesity in children is genetics. When a woman gains certain amount of weight during her gestational period she has higher chances of having an obese baby (Bloonpleng and others, 2013). Furthermore, is the obesity cause by lack of exercise. This last mention plays an important part, this occur when a child feels bad about itself and as a result up avoiding play time with peers, finding comfort in internet, food, and tv (Soric & Misigoj 2010).

Obesity could bring consequences to a child health and well-being. From being affected by depression to being rejected or not chosen by other kids at playgrounds (Sanchez, Pitrou, and others 2010). Just like in adults’ children could suffer from insulin resistant syndrome, which is the main risk for cardiovascular disease, hypertension, blood clotting tendency and diabetes type 2, in children as young as 5 years of age (Lancet, 2002). An obese child could also be facing other health issues such as sleep apnea, and asthma. Black and Hispanic kids who live in the United States have greater chances to develop type 2 diabetes or a heart disease than the average white kids (Lancet, 2002).

A program called APPLE (Active Programmed Promoting Lifestyle) is one of the programs involved in controlling childhood obesity. This program aims to reduce the calories intake in American children at risk for cardiovascular disease by increasing vegetable consumption, and adding physical activities (Lancet, 2002). The Government is also playing a role in minimizing obesity in children. Controlling the amount of fattening foods and counting calories on sodas and fast food are some of the policies required by the government throughout school’s cafeteria (Bloonpleng, 2013).

In conclusion there are several factors that contribute to childhood obesity. Whether being a result of overfeeding, genetic mutation or lack of physical activities, it is a reality that could be affecting kids all around the world. Obese children are at risk to develop medical and psychosocial complications that will eventually lead to adult morbidity (Lancet, 2002), therefore, it is good news that the government and other organization continue to work on the most appropriated solution to reduce or eliminate childhood obesity.

THE DISEASE COULD BE CURE

Early intervention in controlling overweight, could be the key to preventing the disease childhood obesity might be. Awareness of portion size, training new parents to recognize when and how much a child should eat to avoid overfeeding (Skoranski, 2013), are key ingredients in the cure of childhood obesity.

Childhood Obesity, a Crisis that could be cure. (2019, Oct 07). Retrieved from https://papersowl.com/examples/childhood-obesity-a-crisis-that-could-be-cure/