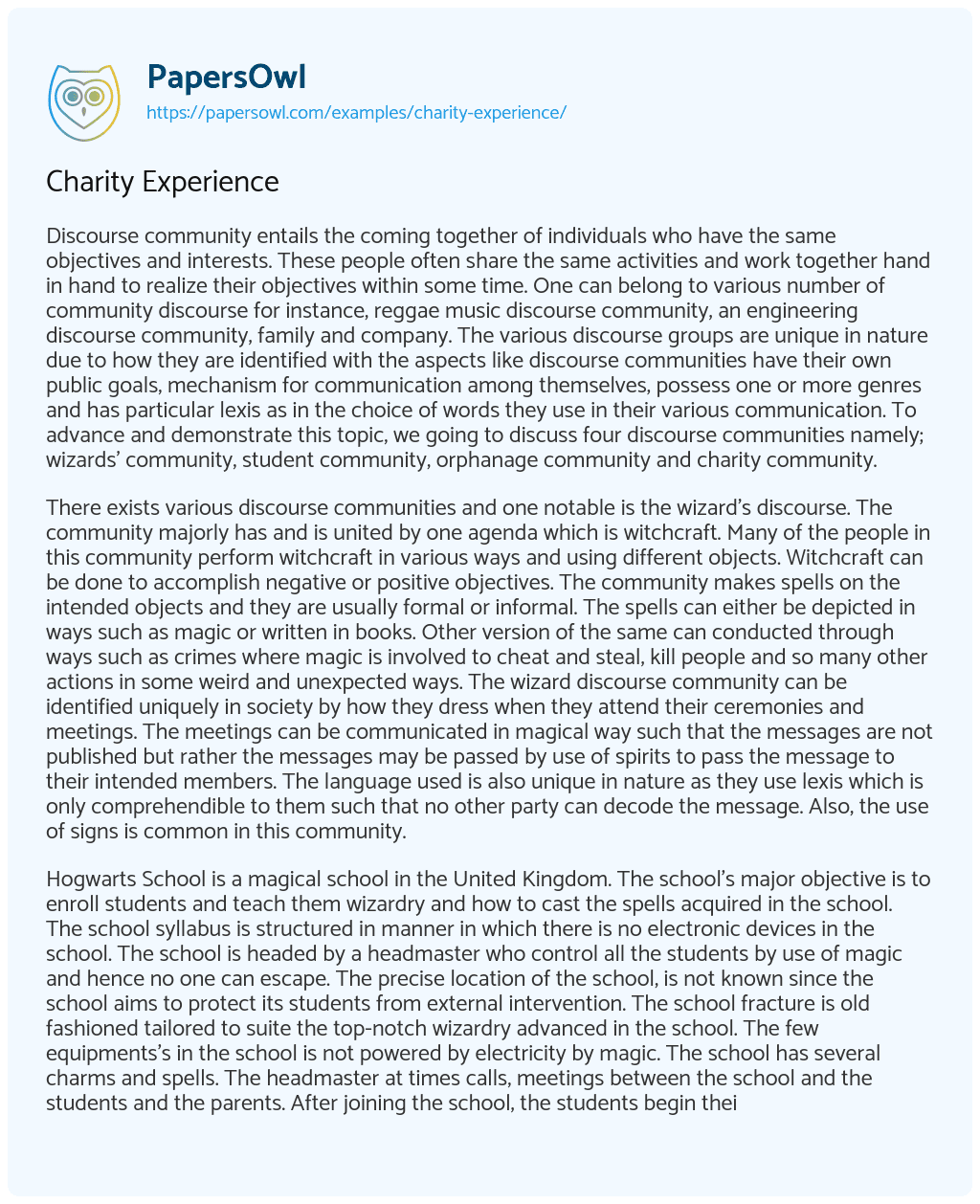 There exists various discourse communities and one notable is the wizard’s discourse. The community majorly has and is united by one agenda which is witchcraft. Many of the people in this community perform witchcraft in various ways and using different objects. Witchcraft can be done to accomplish negative or positive objectives. The community makes spells on the intended objects and they are usually formal or informal. The spells can either be depicted in ways such as magic or written in books. Other version of the same can conducted through ways such as crimes where magic is involved to cheat and steal, kill people and so many other actions in some weird and unexpected ways. The wizard discourse community can be identified uniquely in society by how they dress when they attend their ceremonies and meetings. The meetings can be communicated in magical way such that the messages are not published but rather the messages may be passed by use of spirits to pass the message to their intended members. The language used is also unique in nature as they use lexis which is only comprehendible to them such that no other party can decode the message. Also, the use of signs is common in this community.

Hogwarts School is a magical school in the United Kingdom. The school’s major objective is to enroll students and teach them wizardry and how to cast the spells acquired in the school. The school syllabus is structured in manner in which there is no electronic devices in the school. The school is headed by a headmaster who control all the students by use of magic and hence no one can escape. The precise location of the school, is not known since the school aims to protect its students from external intervention. The school fracture is old fashioned tailored to suite the top-notch wizardry advanced in the school. The few equipments’s in the school is not powered by electricity by magic. The school has several charms and spells. The headmaster at times calls, meetings between the school and the students and the parents. After joining the school, the students begin their magical classes and they are given homework and if a student do not submit the assignment or submit it late, the student is liable to detention. The school calendar is structured in a way that it resembles those of the non-magical school hence it has their terms in a year with some breaks. At the end of the course, the students are expected to have deep knowledge and implement the various lessons thought magically. Some of the areas thought include but not limited to history of magic, astronomy, potions, charms, herbology, dark arts, muggle studies, ancient runes among several others.

Orphanage is another termed coined which is applicable to children who have lost both of their parents. These is another discourse community because of its uniqueness which is that the children have lost their parents. The care of the orphaned children can be attributed to well-wishers who can care for these kids. The custodians can be children homes or luckily the children can be adopted by various families as their children. The experiences of the orphans can however be very bad since they can be exposed to extreme mistreatment and child abuse. These can be very damaging to their self-esteem and their health.

Charity is also another community of discourse. Charity is more of a calling since it involves caring for the needy in the society by providing the basic needs to these that undergo various difficulty. Charity can be in form of various forms. One way is by providing the basic needs such as food, shelter and clothing. Other charity activities may involve the provision of the emotional support by encouraging those or are distressed and making sure that one gives the necessary love of the affected individual.

My Personal Experience that Led to Success

About Witchcraft in the Crucible

Charity in a Christmas Carol and It’s Long Term Effect

My Experience as Teacher