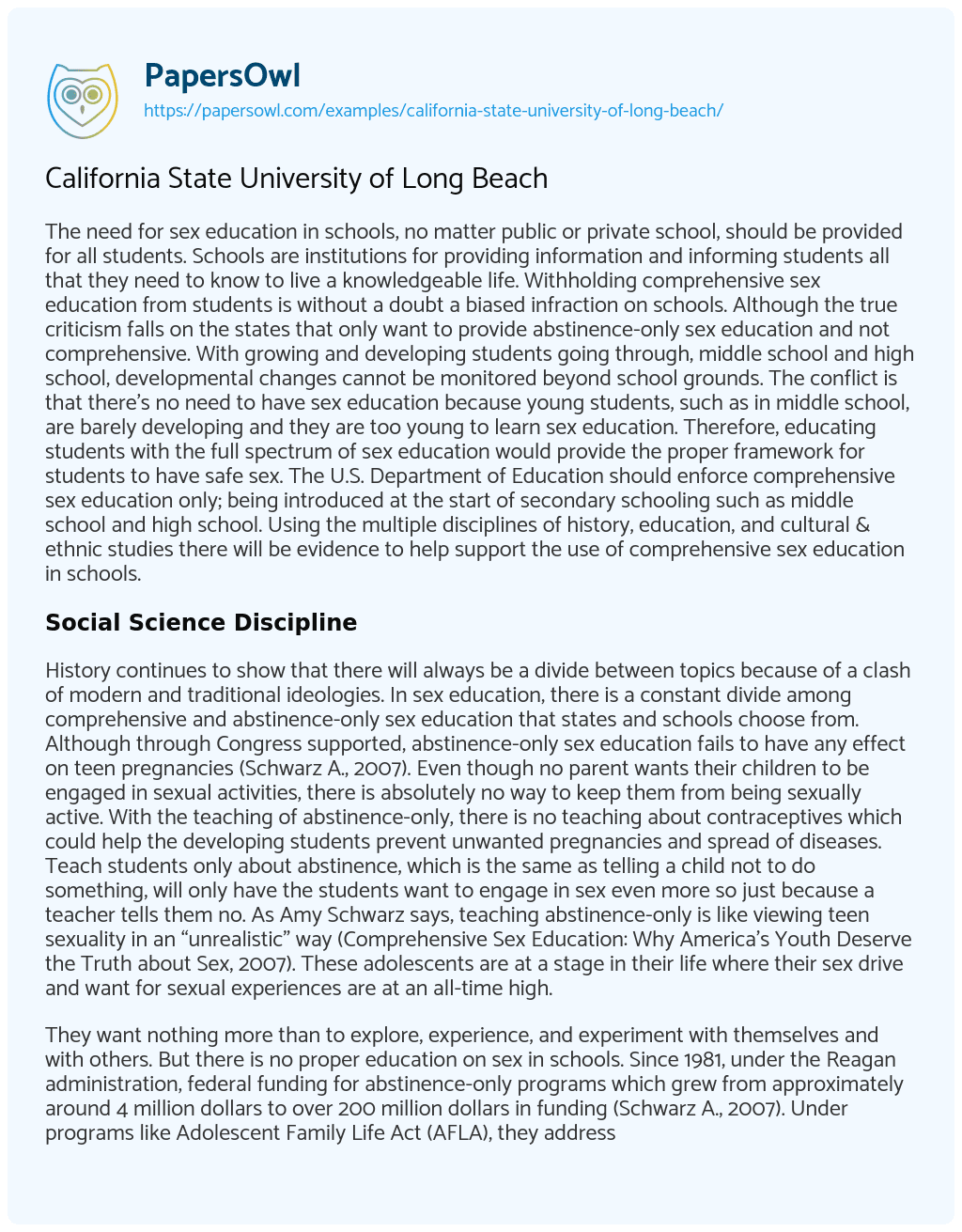 History continues to show that there will always be a divide between topics because of a clash of modern and traditional ideologies. In sex education, there is a constant divide among comprehensive and abstinence-only sex education that states and schools choose from. Although through Congress supported, abstinence-only sex education fails to have any effect on teen pregnancies (Schwarz A., 2007). Even though no parent wants their children to be engaged in sexual activities, there is absolutely no way to keep them from being sexually active. With the teaching of abstinence-only, there is no teaching about contraceptives which could help the developing students prevent unwanted pregnancies and spread of diseases. Teach students only about abstinence, which is the same as telling a child not to do something, will only have the students want to engage in sex even more so just because a teacher tells them no. As Amy Schwarz says, teaching abstinence-only is like viewing teen sexuality in an “unrealistic” way (Comprehensive Sex Education: Why America’s Youth Deserve the Truth about Sex, 2007). These adolescents are at a stage in their life where their sex drive and want for sexual experiences are at an all-time high.

They want nothing more than to explore, experience, and experiment with themselves and with others. But there is no proper education on sex in schools. Since 1981, under the Reagan administration, federal funding for abstinence-only programs which grew from approximately around 4 million dollars to over 200 million dollars in funding (Schwarz A., 2007). Under programs like Adolescent Family Life Act (AFLA), they address that the only way to avoid pregnancy, sexually transmitted diseases, and its absolute purpose for maintaining a healthy life is through abstinence (Howell, M., 2007). When abstinence is not the only preventative measure; it’s unquestionable that humans are very sexual beings. The undeniable reason for having sex is for pleasure, procreate, and to show exclusive love to a partner. Abstinent-only programs like AFLA, gained support by states, such as Utah and Alabama, because states and their senators wanted abstinence as the only birth control for students to use (Doan A. E. and McFarlane D. R., 2012). Because these programs followed a conservative framework all the while being funded by the government it gained appeal by many states. Even though public schools are free, at the cost of a student’s full rang education abstinent-only education is known to purposely use inaccurate information while comprehensive sex education uses medically accurate information to students (Schwarz A., 2007).

Education is the main structure of every student to become a successfully functioning citizen of the world. Operating daily life with what was taught in school, students are assumed to remember everything they learned from school. Learning the appropriate information can help delay risky sexual behavior, and it is shown to be effective to start at a middle school level (Grossman, J. M., Tracy, A. J., Charmaraman, L., Ceder, I., & Erkut, S., 2014). The best route to reach out to the students is at a younger age, even if it may seem strange because during middle school a lot of female students have already started their menstrual cycle and male students start their puberty process. Having gone through the puberty process so early they need to be informed not only about sex but about their developing bodies and what to expect when puberty is done. With a school-based curriculum, in middle school, surrounding the legitimate medical information comprehensive sex education can reduce early sexual intercourse (Grossman, J. M., Tracy, A. J., Charmaraman, L., Ceder, I., & Erkut, S., 2014). To reduce risky sexual behavior, it makes sense to teach at a younger age the risks they are putting themselves into when engaging in sex. Teaching at a younger age that only having sex one time, without the use of any contraceptive, can increase their risk of teenage pregnancies and sexually transmitted infections which is the direct correlation to the failure of abstinent-only education (Carter, D., 2012). Although education is not only school institutions, it is also at home with the family unit. So, by families sharing their values and beliefs on sex can help students, even though it might be uncomfortable. With the support of nurses, simply talking about “contraception will not encourage sexual activity and will result in lessening the chance that young people will experience unintended pregnancy or sexually transmitted infections” (Carter, D., 2012).

For certain states vary in culture and ethnic differences; every state has a different view on comprehensive sex education and abstinent-only education. As stated earlier, southern states tend to be more conservative and colossal supporters of abstinent-only education. And yet these are the states with highest teen pregnancy rates, for example, Mississippi has a 38% rate when the national rate is 24% (Hamilton, B.E., Martin, J.A., Osterman, M.J.K., & Curtin, S. C., 2015). These southern states purposely take federal funding to fund abstinent-only education so that their student know to only practice abstinence, and yet they have the highest teen pregnancies. Which is why it being important for these conservative states, like Mississippi, to rethink their position on abstinent-only education (McDavitt, L., Black, F., Grant, M. & Jae-Young, K., 2014). Teen pregnancies are often a vicious cycle that affects mother to child and is very difficult to break out of alone. Being teen mothers, fulfilling a full-term pregnancy is difficult to go through, and not to mention very expensive. Taking care of a baby is expensive alone, teen moms rely on public services, such as welfare, that are being paid for by taxpayer money which could’ve been used for another purpose if only the teen moms would’ve used a condom (McDavitt, L., Black, F., Grant, M. & Jae-Young, K., 2014). A tie in the southern culture is the urban and rural communities that connect with their religious beliefs. Rural southern states have the littlest resources to offer, but being religious and conservative they believe in abstinence till marriage; making rural areas large risks for teen pregnancies (Blinn-Pike, L., 2008).

Even though times change, history shows the depths that the government has gone to secure abstinent-only education for schools. Even though the education these schools teach is misled information that does not teach the full array of sex education. The different cultures and ethics of the United States are what will increase the rate of teen pregnancies. The comprehensive approach is shown to be useful in informing developing students, and how abstinence is not the only option. Even though southern states are not all properly resourced, they still teach abstinence-only to collect their funding for it. The government spends taxpayer money on programs that have been shown to not work when the funding should go towards family planning, planned parenthood, or supplying proper resources for decreasing the alarming rate of teen pregnancies and sexually transmitted infections.

Sex education is a highly-underestimated subject in school, often because administrators think it is unnecessary, students think it’s awkward, and some parents just do not like their children learning about sex. Personally, everyone has a right to know about their bodies, for example, how do bodies develop, what the reproduction cycle is like, what contraceptives are there, what exactly goes on during my menstrual cycle, and so on. Because of the comprehensive sex education that I learned from in high school, it gave me information on bill control and how it can help with my irregular menstrual cycle while I played volleyball. Because of how inclusive and comprehensive my education was in middle school I learned that other girls were going through the same thing as me; every girl, including myself, thought that the blood they saw coming from their vagina might that they were going to die. So, learning about how the southern states are so stagnated on their beliefs, and yet they have proof right in front of them that their states are causing the rise of teen pregnancy. But they are getting money for teaching abstinence-only, and quite frankly what state wouldn’t take consistent funding?

Simply stating that there should be a change in sex education is not enough to truly make a change. Maybe schools are not ready to make the change so suddenly, maybe the change needed is the resources. As a learner, I have a flaw, I tend to assume a lot. Thankfully because of researching, I did not know that there were two different types of sex education and that not every state has resources as California does. I did not know about how privileged I was to be in a state with health insurance for birth control, with a college that provides free condoms or to be in a state where our outreach programs. Research is applying the want to learn more and self-educate from what is real and not real. Applying research to daily life is a must for everyone, for example, everything you do or eat can be looked up for research purposes. Even looking up schools who offer comprehensive sex education or areas with proper resources with sex education.

Importance of Sex Education in America

Why you should Support the Healthy Adolescent Act