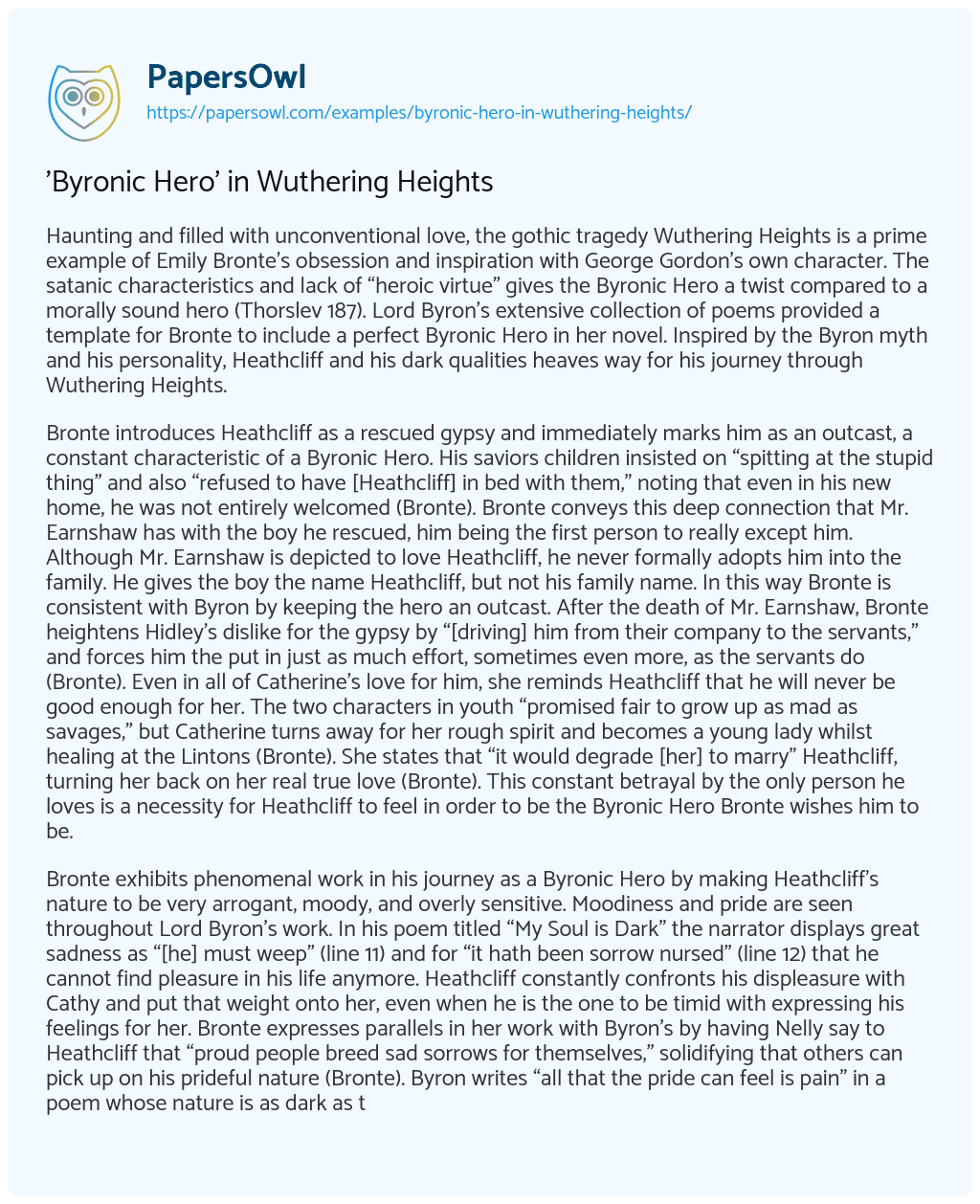 Haunting and filled with unconventional love, the gothic tragedy Wuthering Heights is a prime example of Emily Bronte’s obsession and inspiration with George Gordon’s own character. The satanic characteristics and lack of “heroic virtue” gives the Byronic Hero a twist compared to a morally sound hero (Thorslev 187). Lord Byron’s extensive collection of poems provided a template for Bronte to include a perfect Byronic Hero in her novel. Inspired by the Byron myth and his personality, Heathcliff and his dark qualities heaves way for his journey through Wuthering Heights.

Bronte introduces Heathcliff as a rescued gypsy and immediately marks him as an outcast, a constant characteristic of a Byronic Hero. His saviors children insisted on “spitting at the stupid thing” and also “refused to have [Heathcliff] in bed with them,” noting that even in his new home, he was not entirely welcomed (Bronte). Bronte conveys this deep connection that Mr. Earnshaw has with the boy he rescued, him being the first person to really except him. Although Mr. Earnshaw is depicted to love Heathcliff, he never formally adopts him into the family. He gives the boy the name Heathcliff, but not his family name. In this way Bronte is consistent with Byron by keeping the hero an outcast. After the death of Mr. Earnshaw, Bronte heightens Hidley’s dislike for the gypsy by “[driving] him from their company to the servants,” and forces him the put in just as much effort, sometimes even more, as the servants do (Bronte). Even in all of Catherine’s love for him, she reminds Heathcliff that he will never be good enough for her. The two characters in youth “promised fair to grow up as mad as savages,” but Catherine turns away for her rough spirit and becomes a young lady whilst healing at the Lintons (Bronte). She states that “it would degrade [her] to marry” Heathcliff, turning her back on her real true love (Bronte). This constant betrayal by the only person he loves is a necessity for Heathcliff to feel in order to be the Byronic Hero Bronte wishes him to be.

Bronte exhibits phenomenal work in his journey as a Byronic Hero by making Heathcliff’s nature to be very arrogant, moody, and overly sensitive. Moodiness and pride are seen throughout Lord Byron’s work. In his poem titled “My Soul is Dark” the narrator displays great sadness as “[he] must weep” (line 11) and for “it hath been sorrow nursed” (line 12) that he cannot find pleasure in his life anymore. Heathcliff constantly confronts his displeasure with Cathy and put that weight onto her, even when he is the one to be timid with expressing his feelings for her. Bronte expresses parallels in her work with Byron’s by having Nelly say to Heathcliff that “proud people breed sad sorrows for themselves,” solidifying that others can pick up on his prideful nature (Bronte). Byron writes “all that the pride can feel is pain” in a poem whose nature is as dark as the hero in Wuthering Heights (Prometheus line 8). Bronte almost mimics her idle in this part of the storyline. Heathcliff is very arrogant in how others notice his deep feelings for Catherine. He believes that “they know not I knew thee” and that by ignoring the ways others noticed his actions he could conceal them better from himself (When We Two Parted line 21). His arrogance to others makes him believe he can conceal himself from all of the characters in the novel. Ultimately, a Byronic Hero’s immense hubris and arrogance is what leads to their untimely sorrow.

While heros typically win in the end, Heathcliff is presented with a different conclusion to his story. Not only is a Byronic Hero isolated from society, they are often exiled in some way. While Bronte’s version of exile is unorthodox, Heathcliff’s heart can be said to end up in that state. Heathcliff left without any word, and Catherine was forced to move on for she did not know whether he was dead or alive. The day of his return was certainly hell for Heathcliff. He was forced to watch his true love marry another, and in utter despair over it. Heathcliff’s moody nature causes him to strike out at Catherine by marrying her sister-in-law. He was in utter despair, “Oh my life! how can I bear it?” were words he spewed to Catherine as she layed on her deathbed (Bronte). Forced to see her with another, then she leaves the earth before he himself does. In his rage, Heathcliff casts a curse upon his beloved, “while you are at peace I shall writhe in the torments of hell” (Bronte). Shouted into the air, he tells her that his “kisses and tears” will not only blight her, but that “they’ll damn you,” causing her torment (Bronte). He repeats that hell will come to Earth if she were to go to Heaven. In this, he keeps her ghost around to haunt him. Bronte creates a hell for the hero that he could not escape. His wound cuts deeper as young Cathy grows older. She is the spitting image of her mother. Heathcliff would see his Catherine in her and his torment grew more immense. Bronte wrote a lot of pain into Heathcliff’s life, just as Byron wrote into his poems.

Inspired by the work of a mysterious, yet profound writer, Emily Bronte includes Lord Byron’s hero in her novel Wuthering Heights. A sensitive, moody, and exiled gypsy marks the hero of the story. Bronte exceeded those of her time by creating a “relatively new genre” centered by the use of a Byronic Hero (Harold Bloom). Dark and moving, Bronte explores the sorrows that fills Heathcliff’s life, writing a tragedy that displays the need for revenge only leads to eternal suffering.