Business Ethics in the Government 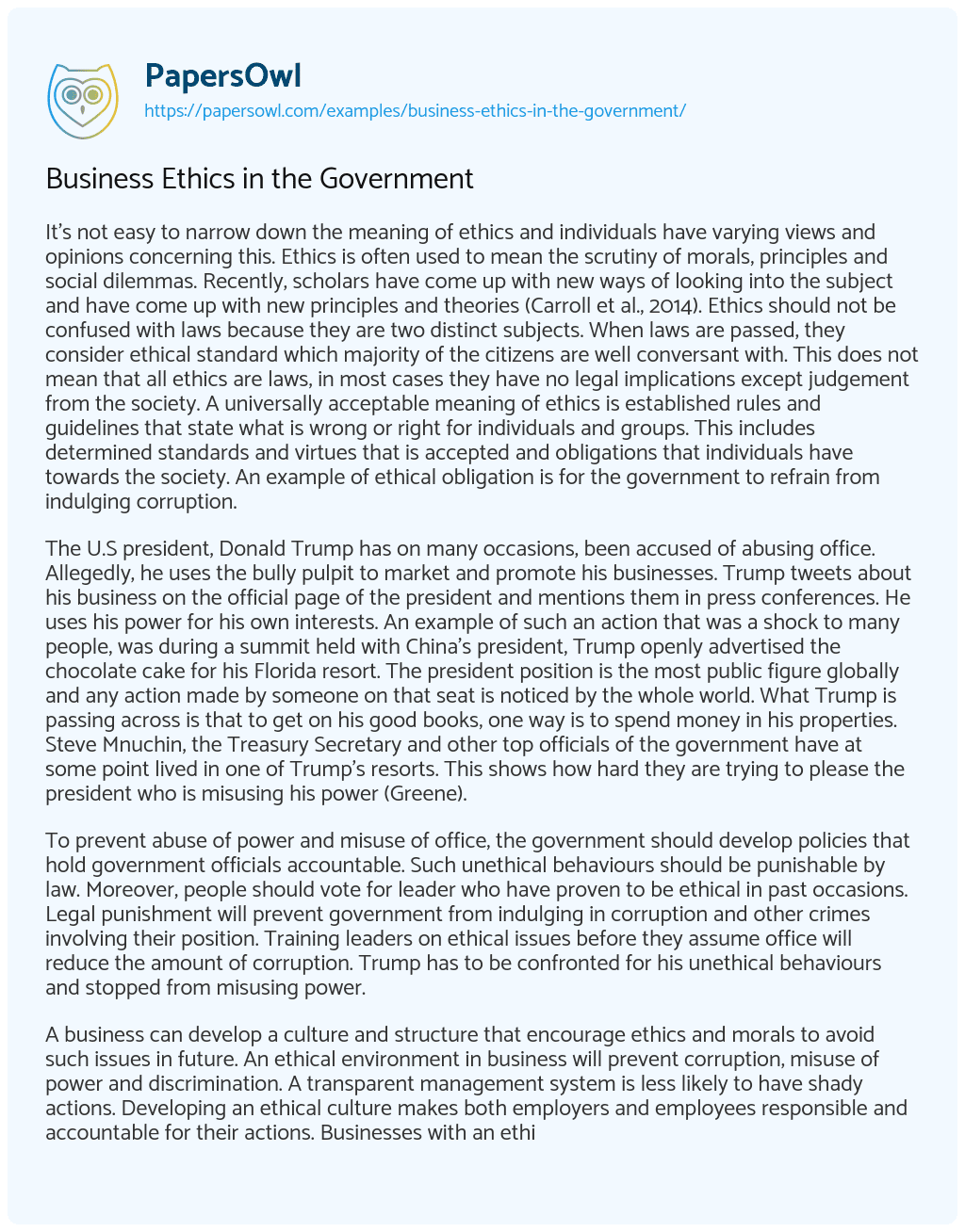 It’s not easy to narrow down the meaning of ethics and individuals have varying views and opinions concerning this. Ethics is often used to mean the scrutiny of morals, principles and social dilemmas. Recently, scholars have come up with new ways of looking into the subject and have come up with new principles and theories (Carroll et al., 2014). Ethics should not be confused with laws because they are two distinct subjects. When laws are passed, they consider ethical standard which majority of the citizens are well conversant with. This does not mean that all ethics are laws, in most cases they have no legal implications except judgement from the society. A universally acceptable meaning of ethics is established rules and guidelines that state what is wrong or right for individuals and groups. This includes determined standards and virtues that is accepted and obligations that individuals have towards the society. An example of ethical obligation is for the government to refrain from indulging corruption.

The U.S president, Donald Trump has on many occasions, been accused of abusing office. Allegedly, he uses the bully pulpit to market and promote his businesses. Trump tweets about his business on the official page of the president and mentions them in press conferences. He uses his power for his own interests. An example of such an action that was a shock to many people, was during a summit held with China’s president, Trump openly advertised the chocolate cake for his Florida resort. The president position is the most public figure globally and any action made by someone on that seat is noticed by the whole world. What Trump is passing across is that to get on his good books, one way is to spend money in his properties. Steve Mnuchin, the Treasury Secretary and other top officials of the government have at some point lived in one of Trump’s resorts. This shows how hard they are trying to please the president who is misusing his power (Greene).

To prevent abuse of power and misuse of office, the government should develop policies that hold government officials accountable. Such unethical behaviours should be punishable by law. Moreover, people should vote for leader who have proven to be ethical in past occasions. Legal punishment will prevent government from indulging in corruption and other crimes involving their position. Training leaders on ethical issues before they assume office will reduce the amount of corruption. Trump has to be confronted for his unethical behaviours and stopped from misusing power.

A business can develop a culture and structure that encourage ethics and morals to avoid such issues in future. An ethical environment in business will prevent corruption, misuse of power and discrimination. A transparent management system is less likely to have shady actions. Developing an ethical culture makes both employers and employees responsible and accountable for their actions. Businesses with an ethical culture are likely to perform better than those without (Carroll et al., 2014).

The government has a responsibility to act ethical in all its doings. Unethical actions should be identified and necessary actions be taken. Policies against misuse of power and position can be used to curb such vices. The government should be responsible, transparent, and put the interest of citizens first. Business too, should encourage an ethical culture and environment. This is likely to improve the performance of the business.

Business Ethics in the Government. (2021, Nov 24). Retrieved from https://papersowl.com/examples/business-ethics-in-the-government/

The History of Business Ethics